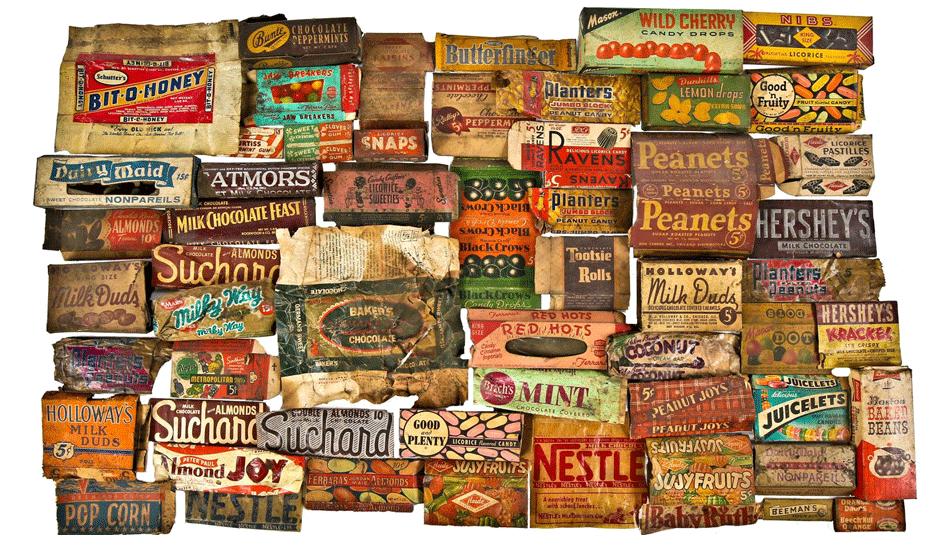 They say one man’s trash is another man’s treasure, and for Chicagoan Eric Nordstrom, that’s especially true. As DNA Info reports, Nordstrom recently uncovered a trove of Depression-era candy wrappers and boxes from a plenum — an air circulation chamber — under the balcony seating of Chicago’s historic Congress Theater, which is in the midst of a massive overhaul since closing in 2013.

Along with the wrappers, Nordstrom found cigarettes packages, ticket stubs, matchbooks, hand-drawn schematics and a “ghost viewer.” How many brands do you recognize? The candy wrappers under the balcony seating.

Nordstrom said of his find,

“This is a rare opportunity to explore a movie palace, largely unaltered since it was built. The plenums should have been frequently cleaned. That didn’t happen here, but it certainly worked to my advantage since a time capsule containing decades worth of refuse was left behind for me to document and in some ways, connect with the people from the past.”

A drink ticket for 100 free drinks! If only this existed today.

And apart from the food, here are a few other interesting and nostalgic finds. The ghost viewers are a silly treat.

How creepy is the design on this cigarette box?

Nordstrom is the founder of Urban Remains, a group located in West Town that reclaims and sells artifacts, antiques and oddities salvaged from historic industrial, commercial and residential structures. Urban Remains’ more than 10,000 online offerings date from the mid-1800s to the late 1960s, the majority of which have been recovered from sites inside Chicago.

During previous “excavations” of the theater, the urban archaeologist Nordstrom uncovered a number of newspapers dating to the weeks before the Congress Theater’s Sept. 5, 1926 opening, as well as hot dog wrappers and discarded tools.