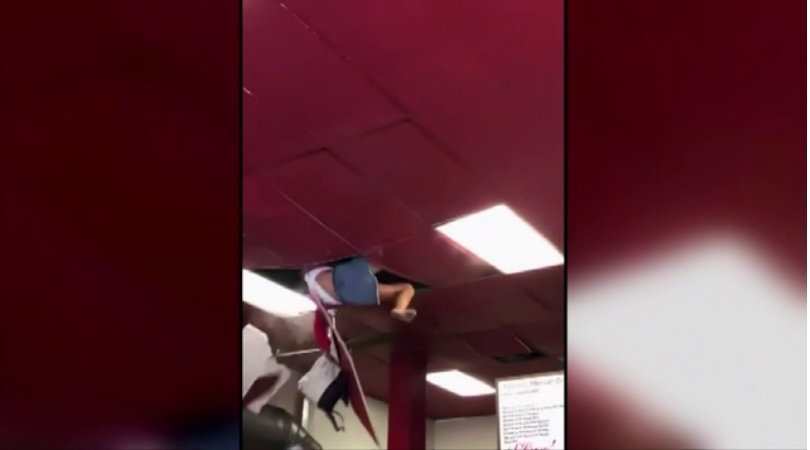 It wasn’t a great day for a woman in Garden Grove after she crashed through the ceiling of Sabroso Mexican Grill in Orange County out of nowhere. According to the owner, several employees and customers noticed buckling ceiling panels and indentations going from one corner to the other, appearing to be the shape of feet. A video was captured of the incident after a customer saw what was happening and grabbed his cell phone, where you can hear him say “she’s right here.”

The video shows the unidentified woman dropping 25 feet to the ground, legs first. You can instantly hear customers screaming as the woman comes crashing down, in a blink of an eye, followed by tile. Fortunately, no customers were hurt and the homeless woman only suffered minor injuries.

Employees stated the homeless woman had asked to use the restroom and directions to a bus stop. The woman was in the restroom for a long time, causing a line to form which is when employees realized she was missing. The woman had stepped on the urinal to holster herself up into the ceiling and climb in through a tile.

Authorities interviewed the woman and noticed she was under the influence of drugs at the time of the incident. When asked what she was doing, she responded she was simply looking for the bus stop after someone told her it was upstairs, and to the right.  Seems legit. Honestly, I am pretty impressed with her climbing abilities. She must be really fit….or really really high. Don’t do drugs, ya’ll.