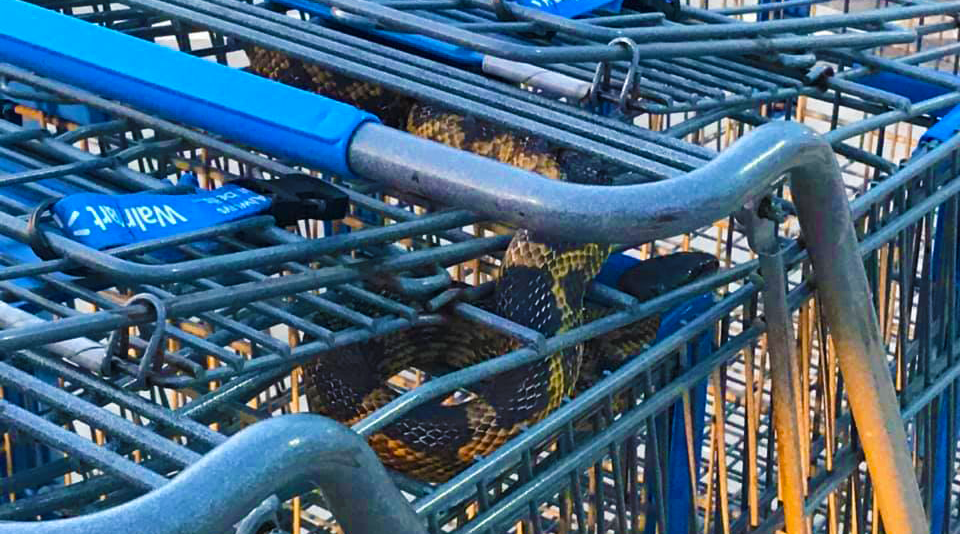 A Texas woman and Walmart worker was in the midst of what she assumed was another ho-hum shift at the superstore when, instead, she was greeted with her worst nightmare: a big, huge snake. The woman was gathering up shopping carts in the parking lot when she came across the snake and started screaming. A nearby Northeastern Police Officer heard her screams and responded immediately.

Fortunately, the woman hadn’t been bitten and the snake wasn’t poisonous (it was a rat snake). The Northeastern PD brought in a snake charmer who, they sort of boasted in their Facebook post, was only bitten once. (Hooray?)

The worst part about this whole ordeal, however, is the warning the Northeastern Police Department left us all with. We’re going to see a whole lot more of these snakes hanging out in our spaces. Cool cool cool. Very cool.

Apparently heavy rains are forcing these and other snakes out of their natural habitats and into ours. So instead of taking a nap up in a tree these rat snakes are going to start snoozing in backyards, sheds, shopping carts, barbecue pits, garages, and, probably, in your bed because why not?

And good news, it’s supposed to be a pretty rainy summer across most of the country. So enjoy your new snake roommates and friends.

If you do happen to see one of these snakes, whether or not they’re poisonous or venonmous, it’s better to give animal control a call than it is to handle them yourself. Like the Northeastern, Texas police said, even their snake charmer got bit once before safely relocating the snake. Chances are you, average person with zero snake charming skills, are going to walk out of whatever interaction you have with a big snake you find on your property a little worse off than that guy.