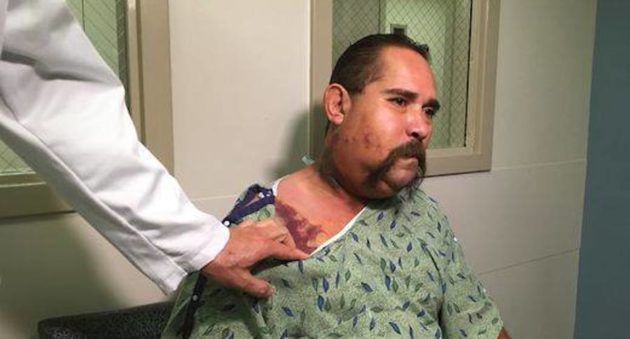 So you want to try to barbecue rattlesnake? Definitely make sure it’s dead first. This Arizona man learned that lesson — a lesson no one on Earth should really ever have to learn in the first place — the hard way.

Okay kids, if you catch a live rattlesnake in your backyard, let it go! Do not make it your pet. Good. We got that out of the way.

Some guy in Arizona didn’t exactly heed that same advice, though, and tried to barbecue one. Unfortunately, poor decisions can result in terrible consequences. In the case of this man trying to show kids how to handle a rattlesnake, that’s exactly what happened.

As the story goes, the whole family was enjoying a birthday in their Arizona hometown when a rattlesnake slithered into the yard. It was at that point Victor Pratt decided he wanted to show everybody that rattlesnakes are nothing to be afraid of. So, as any man would do, he grabbed it, started rolling around on the ground, and kept holding it by the head with intentions to cook it.

“When the kids saw it, I grabbed it,” Pratt said in an interview. “I showed them how to catch it and I was playing with it like little kids do. This is how you play with a snake. I wasn’t thinking. I was showing off like I always do and this time it got me in the neck.”

After being bitten by the rattlesnake in the facial-neck region and on his chest, Pratt immediately knew he was in trouble. After five days of being in so much pain they kept him sedated and mostly unconscious, he was released to go back home.

This story was originally published July 15, 2018.

NEXT: THIS HOMEMADE APPLE PIE MOONSHINE, AND A LITTLE FAITH, CAN CURE PRETTY MUCH ANYTHING