Route 66, the famous highway, also known as the Main Street of America or the Mother Road, was one of the first original highways within the U.S. Highway system. Established on November 11, 1926, the highway originally ran from Chicago, Illinois, through Missouri, Kansas, Oklahoma, Texas, New Mexico, and Arizona, before ending in Santa Monica, California. The road covers a total of 2,448 miles and it’s safe to say it has become one of the most popular destinations worldwide.

Besides some pretty normal gas stations and a number of power lines, the two-lane roadway doesn’t have much to see, but trust me when I say there is plenty to hear. Yes, did you know that a strip of the road has a small part where there’s actual music coming from the road itself? Back in 2014, the New Mexico Department of Transporation, along with the National Geographic Channel, decided to make things fun for passengers and created a roadway that sings. Literally. With the help of Sun Bar Construction Corp, a company that specializes in the design and constructing traffic control signs, they created a 490-yard stretch near Tijeras and Albuquerque that grooves along to the wonderful “America the Beautiful”.

But like everything in life, there’s a catch! One can only hear the song when traveling at exactly 45 mph, which is the speed limit. NMDOT created this “special perk” to advertise rules by Nationwide Insurance to get drivers to be safe and follow the proper speed limits. How does it work? Simple. All sound and music notes that one can hear day to day are with the help of vibrations through the air. For example, anything that vibrates 330 times in one second produces in an E note on either a guitar string, a tuning fork, or even a tire!

To produce an E note with the car, the builders had to space the rumble strips, if driven at 45 mph for one second, to hit 330 strips. So, to all my mathematicians out there, that’s 2.4 inches between each rumble strip. After that, builders decided to break down the music into exact “chunks of time” and applied the same technique and spacing depending on what notes needed to be longer and which ones need to be shorter.

Personally, I think this is pretty genius. There is an open road with beautiful scenery and music all at once. What could be better? There are only a handful of rhythmic roadways around the world, including highways in Japan (Melody Road) and Denmark (Asphaltophone). Honda, the automobile manufacturer, also built one near Lancaster, California as part of an ad campaign that remains popular with a motorist. I don’t’ know about you, but I feel like every highway should play a song pertaining to their state. 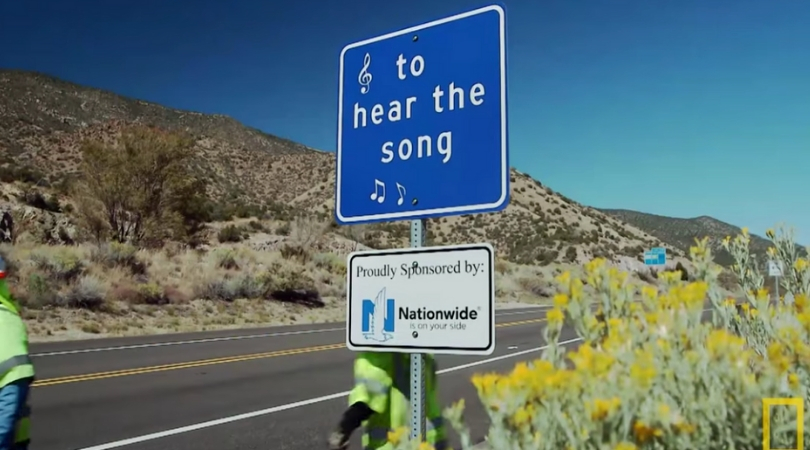