After another terror attack in Europe, Tucker Carlson issues anti-Muslim warning to Americans 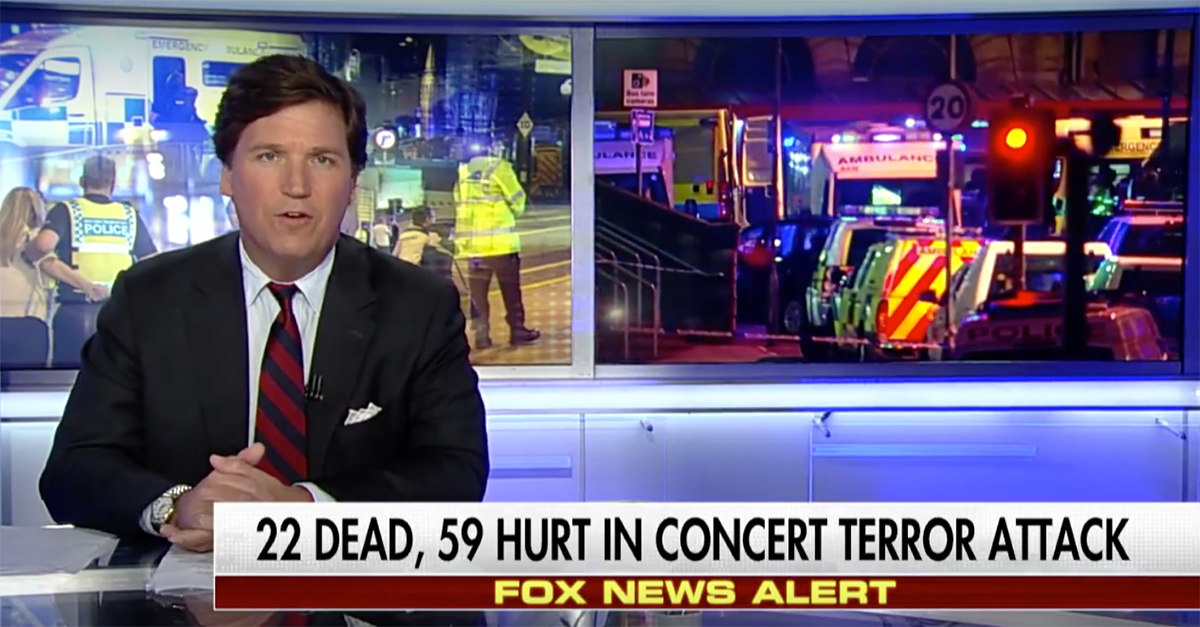 Fox News’ Tucker Carlson told his viewers Tuesday night that American leaders are simply going to tell us that terror attacks are something “that happen, like the weather,” and that we should all just move on, or “better yet just pretend it’s not happening.”

Carlson is not a believer in such seemingly laissez-faire attitudes toward terrorism and the groups that perpetuate it. He noted a BBC report that suggested Europeans are getting used to attacks like the one that killed 22 people at an Ariana Grande concert in Manchester, England, because they’re never going to be able to stop them from occurring.

Carlson takes issue with the notion of acceptance. He asked why terrorism in Europe is an inevitability now when it wasn’t a few decades ago. It’s all about demographics, he said.

“The answer is what most people understand, but relatively few admit is that demographics changed,” Carlson said. “There are a lot of Muslims living in Europe now.”

Carlson acknowledged that “most of them are indeed decent people as we’re often assured.”

“But,” he continued, “a surprisingly large number of them aren’t.”

He then quotes statistics from 2006 and 2007 that reveal Muslim sympathy in Europe for those who conduct terrorist attacks. He offers more current statistics as well, such as a stat he said is from 2014 that shows 47 percent of Bangladeshi Muslims say suicide bombings to defend Islam are acceptable.

Carlson tells his viewers that some of the largest Muslim nations in the world have sent millions of people to the West.

He suggests that American leaders really don’t want to see the statistics and that they “actively suppress them,” adding, “if you really cared about America, you wouldn’t let it become Europe — dangerous, divided unstable.”

“You wouldn’t import a massive Muslim minority into your country simply because they made you feel open-minded and virtuous, and then hope for the best. That’s a faith-based approach and it’s nuts. We know exactly what will happen if we do that because we’re watching it live on television from Manchester right now.”

Carlson then wrapped up his commentary with this: “If you really cared about the country you led, you’d figure out how to make sure that every person you imported, of any religion, enthusiastically shared your most cherished values.”