He called Trump a “bum” in the past, and now LeBron James is doubling down 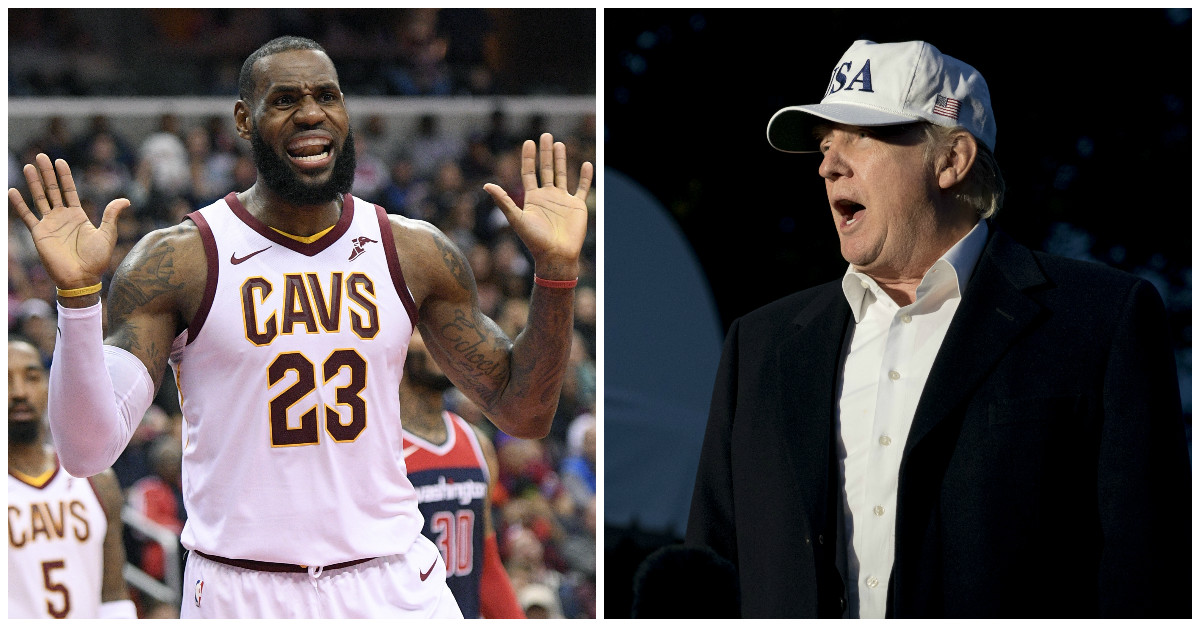 AP Photo/Nick Wass, AP Photo/Andrew Harnik
Cleveland Cavaliers forward LeBron James (23) reacts after he was called for a foul during the second half of an NBA basketball game against the Washington Wizards, Sunday, Dec. 17, 2017, in Washington. The Cavaliers won 106-99. (AP Photo/Nick Wass), President Donald Trump speaks to members of the media on the South Lawn at the White House in Washington, Sunday, Dec. 17, 2017, as he returns from Camp David in Maryland. (AP Photo/Andrew Harnik)

The biggest basketball name on earth right now has once again waded into politics, this time through custom black and white shoes with the word “equality” stitched on the back.

LeBron James of the Cleveland Cavaliers wore the shoes on Sunday while in Washington, D.C., for a game against the Wizards as a message to President Donald Trump.

“Obviously, we know where we are right now, and we know who’s at the helm here,” he said after the game, referring to Trump. “Equality is all about understanding our rights, understanding what we stand for and how powerful we are as men, and as women, black or white or Hispanic.”

James said that he “wanted to try to make another statement” while near the White House.

“No matter your race, no matter your skin color, no matter where you’re from, everybody should have an equal opportunity, equal rights, be able to voice their opinion, be able to stand for something. Especially right now being in Washington, D.C., I wanted to try to make another statement here,” he said.

He added in an interview in the locker room, “We’re not going to let one person dictate to us as Americans how beautiful and powerful we are as a people.”

Again, it is clear who the “one person” is that James is talking about.

NBA employees, coaches and players both, have had a well-documented history of making political statements regarding President Trump.

“This man in the Oval Office is a soulless coward who thinks that he can only become large by belittling others. This has of course been a common practice of his, but to do it in this manner — and to lie about how previous presidents responded to the deaths of soldiers — is as low as it gets,” he said.

“You’re faced with the reality that the man who is going to lead you has routinely used racist, misogynist, insulting words. That’s a tough one,” Kerr said.

RELATED: It didn’t take long for two NBA coaches to tear into a Trump presidency

Kerr’s championship team was notably disinvited from visiting the White House after talk swirled that they would decline the invitation.