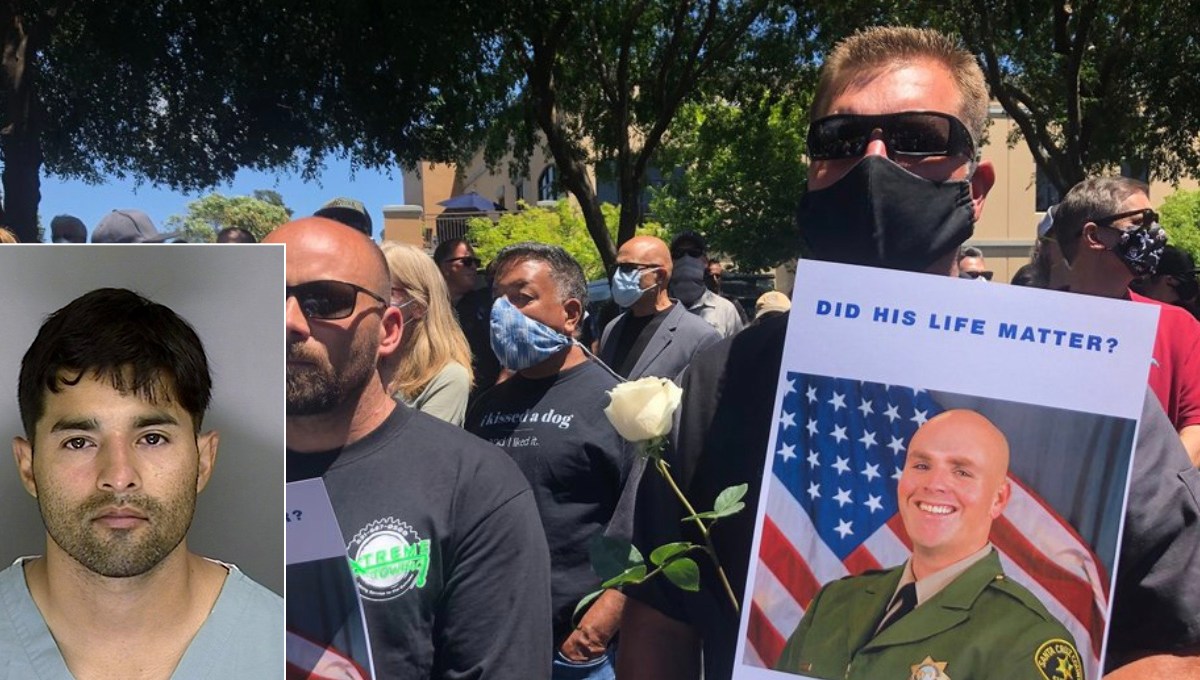 An Air Force sergeant and leader in an elite military security force was armed with homemade bombs, an AR-15 rifle and other weapons and had a desire to harm police when he launched a deadly attack on unsuspecting officers, a Northern California sheriff said Monday.

Gunfire and explosives rained down from a hillside Saturday afternoon as Staff Sgt. Steven Carrillo fired from the high ground onto police who scrambled to find cover and defend themselves, Santa Cruz County Sheriff Jim Hart said.

“He was very intent on killing these police officers,” Hart said at a news conference. “They had no idea that they were about to get into this firefight.”

One of Hart’s deputies, Sgt. Damon Gutzwiller, 38, was shot and killed. Another deputy was shot in the chest — his bulletproof vest saving him — and suffered shrapnel wounds from an explosive and then was struck by Carrillo’s vehicle as the suspect fled the home.

The deputy, whose name has not been released, was in stable condition and good spirits, Hart said. A California Highway Patrol officer was wounded in the hand.

Carrillo escaped, carjacked a vehicle and tried to carjack several others before being subdued through the herculean efforts of a heroic resident, Hart said.

The man saw Carrillo in his backyard and confronted him. Carrillo, armed with the AR-15, demanded the man’s car keys. The man retrieved the keys, gave them to Carrillo and when Carrillo turned away the man tackled him and the rifle fell away from him.

As they struggled, Carrillo pulled a pipe bomb from his pants and tried unsuccessfully to light it. He then pulled out a pistol and the man was able to knock it out of his hands and then subdue him as neighbors came to help, Hart said.

“This guy could have done a lot more damage in our community,” Hart said.

The man who subdued Carrillo does not want to be publicly identified, Hart said, but he plans to award him a medal.

Carrillo suffered a gunshot wound at some point and was being treated for a non-life-threatening injury.

The FBI also is investigating if Carrillo, 32, has any links to the killing of a federal security officer who was shot outside the U.S. courthouse in Oakland during a protest against police mistreatment of black people on May 29. Authorities said the gunman opened fire from a white van.

On Saturday, deputies responded to a 911 call about a suspicious white van in Ben Lomond, an unincorporated area outside the beachfront city of Santa Cruz south of San Francisco. The caller said guns and bomb-making devices were inside, Hart said.

When deputies arrived, the van pulled away and they followed. The van went down a driveway at Carrillo’s home, and the driver ambushed the deputies, authorites said.

Afterward, authorities found pipe bombs, multiple firearms, a large amount of ammunition and bomb-making equipment at the hillside, said Hart, who called Carrillo by name at the start of the news conference and then said “I don’t even want to say his name again.”

Neither Hart nor John Bennett, the FBI’s special agent in charge in San Francisco, would provide additional information about the possible nexus between Carrillo and the Oakland shooting.

Carrillo was a team leader for the Phoenix Ravens at Travis Air Force Base northeast of San Francisco, as part of the 60th Security Forces Squadron. The Phoenix Ravens are tasked with protecting aircraft and crews from assaults on airfields “where security is unknown or additional security is needed to counter local threats,” according to the Air Force.

Carrillo had no record of disciplinary issues during his military career. He was deployed to Kuwait for four months in 2019, according to the Air Force.

Carrillo’s wife, Monika Leigh Scott Carrillo, who also was in the Air Force, was found dead in an off-base hotel in May 2018 while she was stationed in South Carolina. She was 30. Her death was ruled a suicide, according to the Air Force.

Carrillo arrived at Travis Air Force Base the month after her death, the military said. Bennett said it’s believed Carrillo was in California at the time of the suicide and he’s not a suspect.

Carrillo’s arraignment is scheduled for Friday afternoon. He is expected to be charged with first-degree murder.

“It’s very important for Damon’s memory that we get this case right,” Hart said.

A fundraising site for the Gutzwiller’s family set up by the state’s largest law enforcement organization, the Peace Officers Research Association of California, had raised more than $230,000 by Monday afternoon. Gutzwiller is survived by a pregnant wife and one child.