Menu
Follow us
Search
Menu
Search
HOUSTON, TX - OCTOBER 30: Alex Bregman #2 of the Houston Astros celebrates with teammates after hitting a game-winning single during the tenth inning against the Los Angeles Dodgers in game five of the 2017 World Series at Minute Maid Park on October 30, 2017 in Houston, Texas. The Astros defeated the Dodgers 13-12. (Photo by Jamie Squire/Getty Images)

HOUSTON (AP) — Nobody needs a day off in this World Series more than those run-down relievers.

Brandon Morrow has pitched in all five games for the Los Angeles Dodgers. He had never pitched three straight days before talking himself into a wild Game 5, then allowed a tying home run on his first pitch. He left without getting an out and the Houston Astros suddenly ahead by three runs.

Morrow has given up three home runs in the postseason after not allowing any in 45 regular-season appearances.

“It’s not just the amount of games you play, but emotional investment and the incredible focus that everybody has,” he said. “It wears on you mentally, and that kind of mental focus kind of wears on you physically. So yeah, it’s a grind. Guys are fatigued, but not tired, if that makes sense.”

After a 162-game regular season plus another month of high-pressure games in the playoffs, they’re not done yet.

Game 6 is Tuesday night, after both teams travel from Texas back to the West Coast.

Houston never even used struggling closer Ken Giles in its 13-12 win in Game 5, which ended early Monday morning after each team employed seven pitchers in 10 innings over nearly 5½ hours. The loser was Kenley Jansen, the Dodgers’ All-Star closer who had already blown a save in Game 2 — matching his total during the entire year to date.

For the first time ever in 2016, not a single starter recorded an out after the sixth inning of any game — and that Series went the full seven games.

Chicago closer Aroldis Chapman won Game 7 against Cleveland, ending a 108-year title drought for the Cubs. But that was only after he blew the save in the 10-inning game. Indians reliever Andrew Miller had given up two runs and the lead over 2 1/3 innings, his second straight World Series game allowing a run after eight consecutive scoreless playoff appearances.

The Astros took a 3-2 series lead back to Los Angeles, where they won the second game in 11 innings.

Astros manager A.J. Hinch has said Giles will get the ball again in this Series but hasn’t specified in what role after the righty with 100 mph heat was tagged for five runs over 1 2/3 innings in his two World Series appearances. Giles lost Game 4 after taking over in the ninth in a 1-1 tie that turned into a 6-2 Dodgers win.

By this point in the season, it doesn’t really matter how many pitching changes are needed or when relievers are used, as long as they get outs.

Houston relievers have combined for a 5.94 ERA in the postseason.

Morrow has pitched in all but one of the Dodgers’ 13 postseason games, but Los Angeles had not planned to use him Sunday.

“He called down and said that he felt good,” Dodgers manager Dave Roberts said. “So in the seventh inning, you can’t turn him down.”

On the mound for the fifth time in six days, Morrow wasn’t his usual sharp self.

“There wasn’t quite as much life as I’ve had on the ball,” he said. “Velocity is one thing, it was a tick down, but if you have life on it, then you can still get away with some pitches.”

The right-hander got away with nothing against the top of the Astros lineup. All four batters he faced reached, including home runs by George Springer and Carlos Correa as Houston took an 11-8 lead.

Jansen entered in the bottom of the ninth, after the Dodgers scored three times in the top of the inning to tie the game 12-12. He hit Brian McCann with a two-out pitch in the 10th, then walked Springer before Alex Bregman’s game-ending single.

Even in the first World Series game in which both starting pitchers allowed four baserunners or fewer, the bullpens were busy in Game 4 on Saturday night.

Dodgers starter Alex Wood didn’t allow a hit until giving up a homer with two outs in the sixth — and that was the last batter he faced. Houston’s Charlie Morton allowed three hits and hit a batter while pitching into the seventh.

RELATED: Kate Upton may be from Michigan, but there’s proof the future Verlander is a true blue (and orange) Astros fan

Everybody just has to find a little extra to get through one, maybe two more games.

“It’s an extra month of baseball, plus big games. Everything counts, everything matters, everything is magnified,” Dodgers lefty Tony Cingrani said. “It’s definitely more taxing because every pitch is a competitive pitch, especially with guys on it takes a toll on you as well, but I think this day off is going to help.” 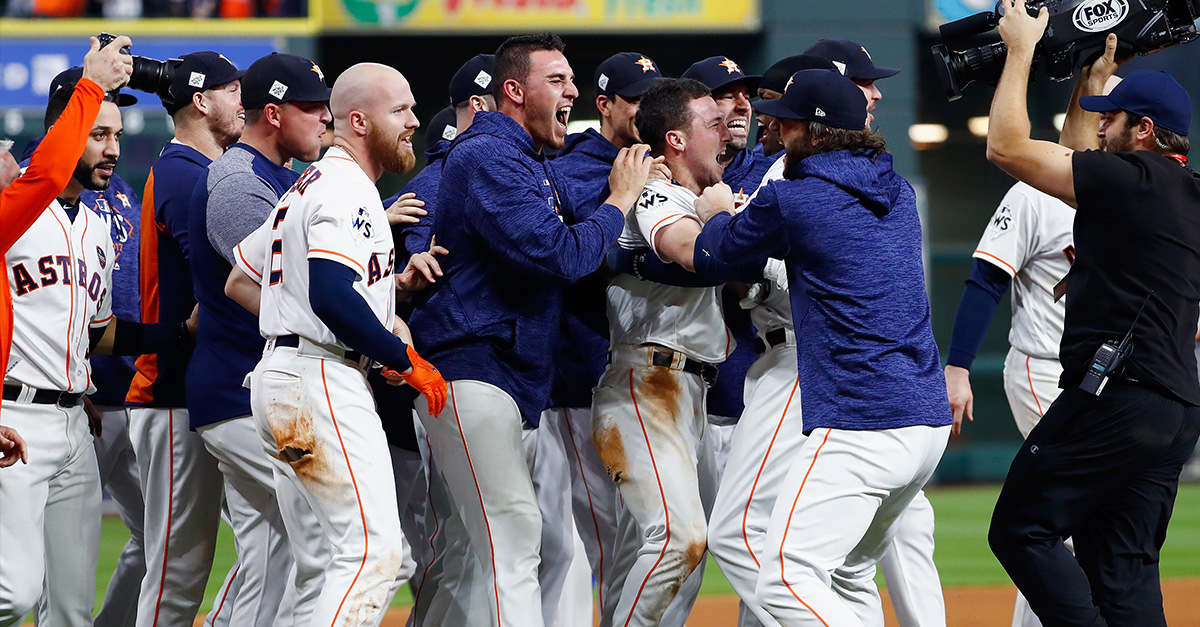