After Hurricane Harvey ravaged southeast Texas, we saw the best of humanity through amazing rescue efforts. But humans weren’t the only ones who affected by the storm. The following stories show some of the selfless ways Texans made sure to take care of even the smallest among them:

Texans say “every life counts” in efforts to save cattle, bats and even alligators

Hurricane Harvey brings out the critters😩 He wants to bring it to his classroom😂😂#OFAM pic.twitter.com/CALTd14sjg

Texans made sure to send a message that their wildlife is not forgotten.

As strangers work to help those who are trapped by flooding, residents shared their efforts to save as many animals as they can.

From herding cattle to saving bats to picking up alligators (this is especially NOT recommended), locals proved that they were not too busy to provide some help along the way.

William Bruso, a Houston cab driver, shared a picture of a Cooper’s hawk that reportedly flew into his vehicle in an effort to escape the hurricane.

Bruso’s attempts to free the hawk failed, so he decided to bring it home.

“Harvey the Hurricane Hawk” reportedly spent the remainder of the storm safely among Bruso’s liquor. They “got drunk and [rode] out the storm” until Bruso handed him off to the Texas Wildlife Rescue Center.

A Texas dog decides to rescue itself

A dog went viral after it was photographed carrying a bag of dog food in its mouth.

It was later discovered that the dog was not a stray and quickly reunited with its owner after the ordeal.

There’s a joke in here about Texas resourcefulness somewhere.

Chance Ward shared a video of his son, Rowdy, using their horses to save another from a pen surrounded by high flood waters.

“This is what we do. We help livestock,” Ward said as he filmed his son working diligently to open the gate and free the horse.

Ward also shared other animal rescue efforts made by his family members and friends.

Two men identified as Kyle Scott and Roy Ethridge saved a dog from the top of a vehicle after CBS11 shared a failed rescue attempt.

The initial rescue failed when the rescue boat could not get close enough to the dog. The already terrified pet also thwarted their attempts to carry it onto the boat.

Scott and Ethridge used their own boat to find the dog and gained its trust with snack sticks. They successfully encouraged the dog to go with them and named it Harvey after bringing it to safety.

You can see Scott, Ethridge and Harvey sitting happily in their boat at the top of this story.

RELATED: All the information you need to help Texans as flooding reaches “catastrophic” levels 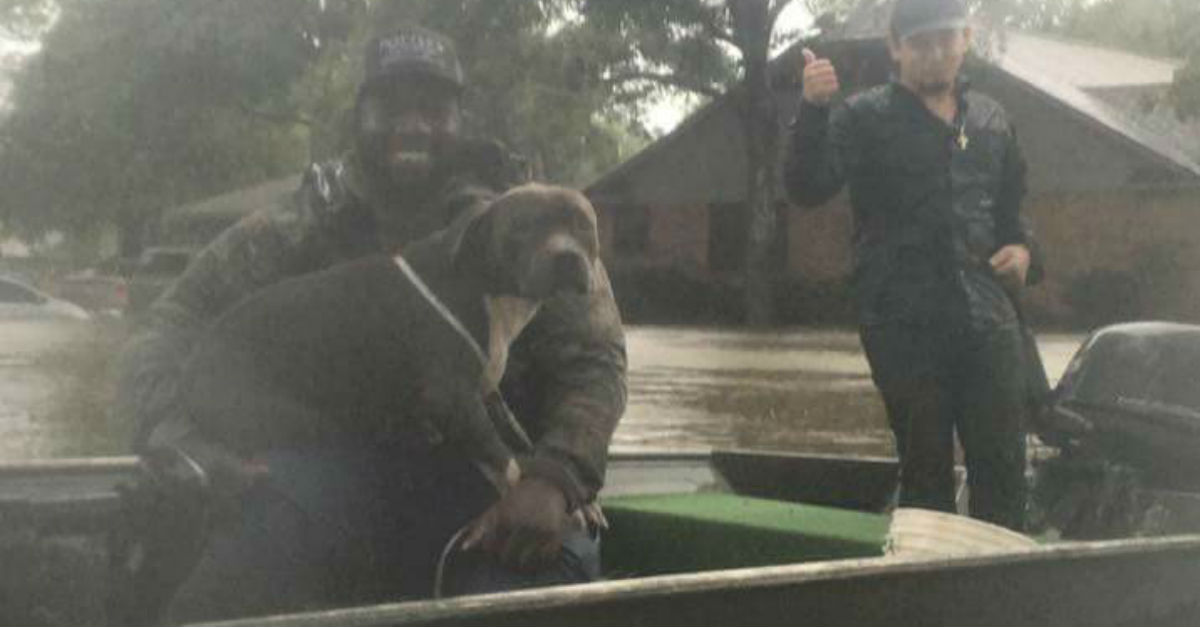