The morning of the inauguration, marijuana advocates from across the country joined DCMJ and other local legalization advocates for an unconventional and unprecedented protest — handing out more than 8,000 joints (yes, the total number went up) to advocates, activists, and passerby as part of a march to the inauguration on the National Mall.

It is an uncertain time for legalization activists. Election Day 2016 saw victories for recreational and medicinal use, even in traditionally red states like Arkansas and North Dakota.

But it also elected Donald Trump. Trump’s nominee for attorney general, Sen. Jeff Sessions (R-AL), has a long and well-documented record of opposition against marijuana in all forms.

RELATED: The top marijuana-loving countries may surprise you

His confirmation hearing was inconclusive; in interviews with Adam Eidinger, co-founder and figurehead of DCMJ, Eidinger concedes that choosing Sessions wasn’t a tangible step forward for legalization but notes that Sessions did not bring back language he’s used in the past when talking about marijuana scheduling and prosecution.

DCMJ started with Adam and Nikolas Schiller, part of a “tiny network of friends” (Eidinger’s words), working on a nonprofit, the DC Patient’s cooperative. They say they wanted to grow and cultivate marijuana for medicinal use.

A clause in DC law and a police raid on Eidinger’s store, Capital Hemp, changed all that. The pair formed DCMJ and announced a more ambitious goal: full legalization in Washington, D.C.

To Eidinger, the issue is a simple one, a question of federalism— even in Washington, D.C., which is not a state. According to him, the district should be allowed to legalize marijuana for recreational and medicinal use despite federal law; if Congress has agreed that the District has home rule and is allowed to put marijuana on the ballot, and the initiative passes by a near-70% margin (it did), “How is that not approved by the Federal Government? […] How are they not circumventing democracy?” 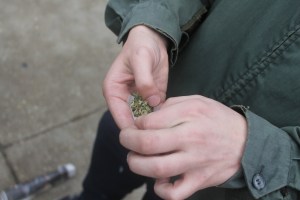 When interviewed yesterday, Eidinger was adamant about one thing in the face of Trump and Sessions: “We’re not going back,” he said.

The attitude at Friday’s gathering and march seemed to reflect that. While leaning anti-Trump (thank D.C.’s demographics for that), the crowd was a diverse one. Perhaps nowhere else in Washington were men and women in “Make America Great Again” hats mingling in line, calmly, with others holding signs depicting the President-Elect under a stream of urine.

All were there to take part in the giveaway or march to the inauguration. 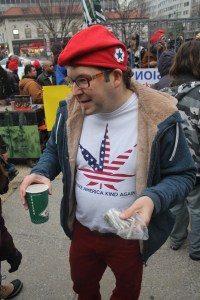 Rare interviewed attendees of the handout and march, asking nearly everyone what was important to them about legalization. For everyone we met, it’s personal—a medical use for themselves, a friend, or family member. Legalization advocates spoke about using marijuana to cope with everything from anxiety to multiple sclerosis and chronic pain management, with some preferring marijuana to opiate painkillers like OxyContin.

Eidinger spoke to us on the turnout of the event.

And then, bluntly: “What are our politicians waiting for?”