Sean Hannity is the Kenneth Parcell of the Trump regime. So when the New York Times published emails exposing a meeting between Russian lawyer Natalia Veselnitskaya and Donald Trump Jr. back in the summer of 2016, Hannity was first to appear on the White House doorstep, beaming and offering his services. One imagines the Trump White House: “All right, we’ve narrowed down Don Jr.’s first post-controversy interview to Hannity and a monkey with a typewriter.” “Obviously Hannity! Not just any simian can provide that kind of spit-and-polish!”

And so Don Jr. headed over to Hannity’s eponymous Fox News program last night. But first the sting music played that always makes it sound like Hannity and Jay Sekulow are off to fight Andross in their Arwings, heralding another opening monologue in which Hannity would address the Destroy Trump Media™, a group whose goals remain mysterious. Hannity’s message: “Why aren’t you looking into Ukrainian collusion?” And a deal Hillary Clinton signed off on that gave 20 percent of America’s uranium capacity to Russia, and Barack Obama’s interventions in Israel’s elections, and the endless leaks from the deep state.

It was a crashing broadside of whataboutism, and it’s not like Hannity doesn’t have a point. Those stories, particularly the scandalous uranium sale to Russia’s atomic agency, have been downplayed in the mainstream press, as has a Politico report on collusion between the DNC and various Ukrainians to damage Donald Trump’s electoral chances. But that doesn’t excuse what Don Jr. did. There is no exculpatory provision in law for if Hillary Clinton does something bad, too, and if there was our criminal justice system wouldn’t have convicted a single person since 1993.

Don Jr. was brought out next looking nervous and talking faster than Tomi Lahren after an espresso double shot. Hannity asked his questions. What did Don think when he saw the emails from Trump family friend Bob Goldstone offering to arrange the meeting with Veselnitskaya? “People reach out all the time with this stuff.” Yeah but presumably not from the Russian government. “Someone sent me an email. I can’t help when someone sends something.” You can refuse to respond though, if, again, it’s a pitch for someone who has ties to the Russian government.

With regard to Veselnitskaya’s identity, Don Jr. said he knew nothing about her in advance. But that’s not true: according to the emails, he was informed by Goldstone that “This is obviously very high level and sensitive information but is part of Russia and its government’s support for Mr. Trump.” Veselnitskaya herself was characterized as a “Russian government attorney.” Tiananmen Square doesn’t send up this many red flags yet Junior still replied, “If it’s what you say I love it.” Then he showed up with Paul Manafort and Jared Kushner to chat, and only left after it became clear Veselnitskaya was more interested in adoption issues than sliming Hillary Clinton.

It’s those emailed heads-ups about the Kremlin’s efforts on Donald Trump’s behalf that elevate this story from crime fiction as told by Louise Mensch to her imaginary friends on the subway to genuine scandal. Yet in 19 minutes of Q&A, Hannity never properly grilled Trump Jr. on this singularly salient point—and maybe that was how it was supposed to be. Don Jr. has now released the emails himself and ventured onto “Hannity” to address them. The question being asked by any casual news consumer is: Why would he do that unless he had nothing to hide? If allegedly damaging information is blasted out on the Twitter account of the person it’s allegedly damning to, can it really be damning?

RELATED: Fed up with Don Jr. criticisms, President Trump goes off on the “greatest Witch Hunt in political history”

That seems to be the Trump Jr. defense: appear transparent while ducking all the real implications. One might even call such a strategy Clintonian, which reminds me: When will the Destroy Trump Media at last get around to investigating Hillary Clinton’s position on the Peloponnesian War? This monomaniacal focus on Donald Trump Jr. merely because he’s a confidante of the most powerful man on earth is liberal media bias at its worst.

And yes, that bit of sarcasm is coming from me, established skeptic of recent Russia hysteria. Don Jr. has shot this story over the relevance threshold and you’d have to be Sean Hannity not to notice. 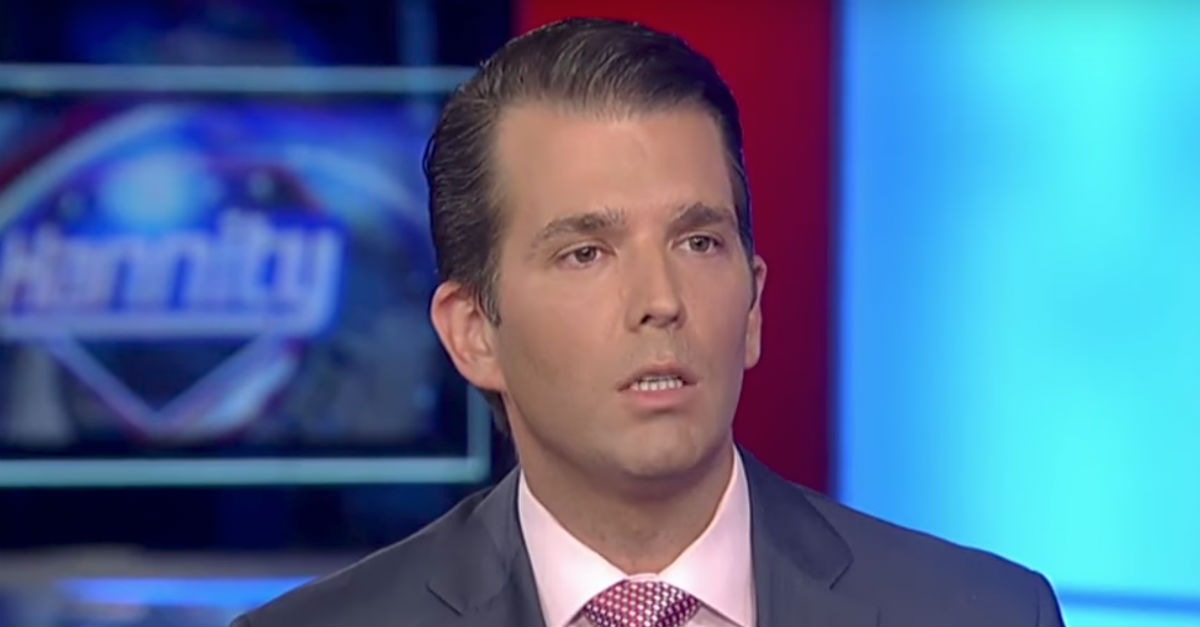