Despite the failure of bills in several red states that would’ve required transgender people to use the bathroom of their “biological sex,” the issue just refuses to die in the Texas legislature.

As a special session in which courts will review transgender bathroom rights yet again draws ever-nearer, Texas lawmakers face pressure from a few different angles. According to the Associated Press, several large companies with political clout like Apple have gone on record opposing the bill. This could lead to boycotts if any such legislation is passed. On the other hand, Republican candidates running for office in 2018 have threatened to leverage the issue against any incumbents who oppose it, or don’t take a side. Political action committees like the Conservative Republicans of Texas have also threatened to oppose anyone who isn’t in favor of passing a bathroom bill.

Right now, the bill is at a standstill, as the U.S. Senate rejected an earlier version of it. The Texas House of Representatives is led by people who oppose any such bill, while the Senate wants to push it through. If this gridlock remains at the end of the upcoming 30-day special session, then the bathroom bill issue could finally die.

RELATED: Scarborough Delivers News Republicans Have Been Dying to Hear. 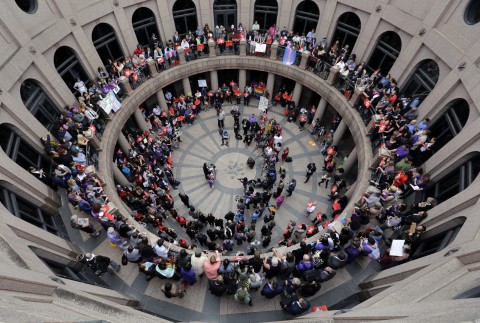