Menu
Follow us
Search
Menu
Search
An anti-fascist demonstrator jumps over a barricade during a free speech rally Sunday, Aug. 27, 2017, in Berkeley, Calif. Several thousand people converged in Berkeley Sunday for a "Rally Against Hate" in response to a planned right-wing protest that raised concerns of violence and triggered a massive police presence. Several people were arrested for violating rules against covering their faces or carrying items banned by authorities. (AP Photo/Marcio Jose Sanchez)

On Sunday, a mass of black-clad anarchists and anti-fascists — “antifa” — descended upon a peaceful rally in a park in Berkeley, leaving chaos in their wake. Members of the group hid their faces behind bandanas and masks while chanting and confronting right-wing protesters. Videos of the protest and violence quickly circulated on social media.

Lizzie Johnson of the San Francisco Chronicle tweeted a video of the protesters attacking a journalist.

"Take his camera, take his phone," they are shouting at a journalist. #berkeley pic.twitter.com/hvsQ5eXalE

Leigh Martinez of KTVU in San Francisco uploaded a video of protesters attacking her and her photographer.

Organizers cancelled Saturday’s right-wing “Patriot Prayer” in San Francisco, citing security concerns, but some of those who would have attended went to nearby Berkeley for Sunday’s “Say No to Marxism in America” rally, slated to host number of alt-right and white nationalist figures, per the LA Times. Antifa infiltrated a generally peaceful left-wing counter-march — in which protesters denounced President Trump and white nationalism — targeting “Patriot Prayer” organizers, the Associated Press reports. Police were non-confrontational with the anarchists but stifled widespread violence and made 13 arrests on various charges, including assault with a deadly weapon.

Berkeley Police Chief Andrew Greenwood commended his officers’ restraint in response to the violence, saying that “the potential use of force became very problematic” and noting there was “no need for confrontation over a grass patch.” Like the alt-right rally-goers in Charlottesville, protesters wielded homemade shields, but theirs were emblazoned with messages like “no hate.”

As the rally wound down, police arrested members of the crowd who refused to remove their masks. Peaceful anti-Trump protesters expressed discontent with antifa; one woman told the LA Times that she worried the march would be tied to violence, while another man said, “We need to get antifa out of here.”

RARE POV: Why asking “What about antifa?” is not a good response to white nationalism 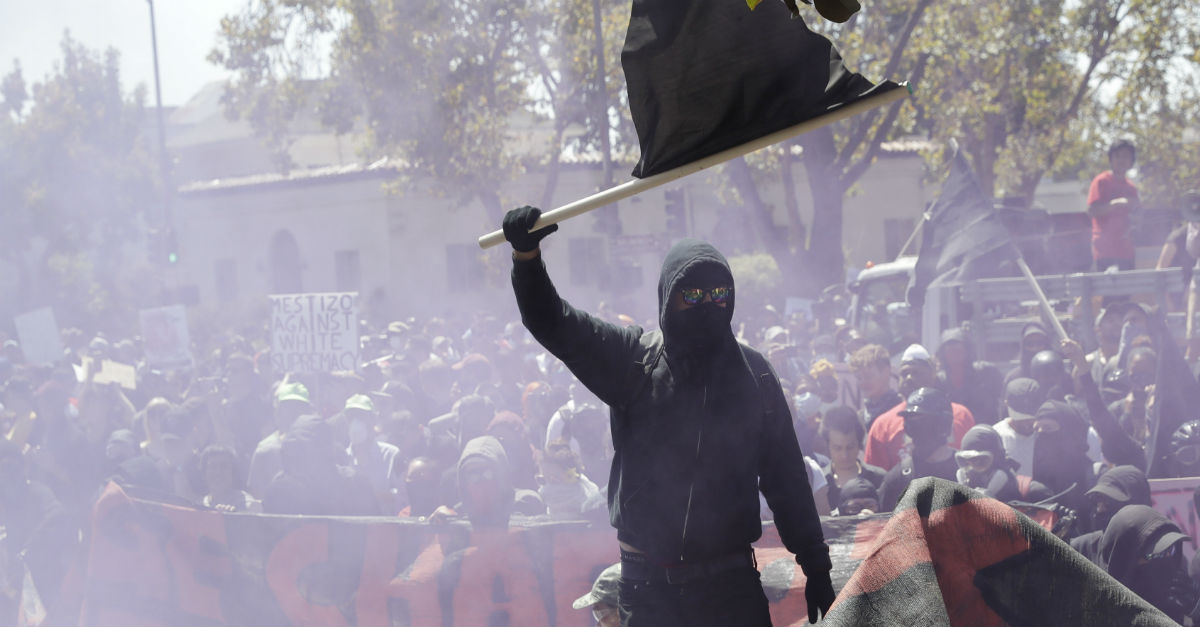