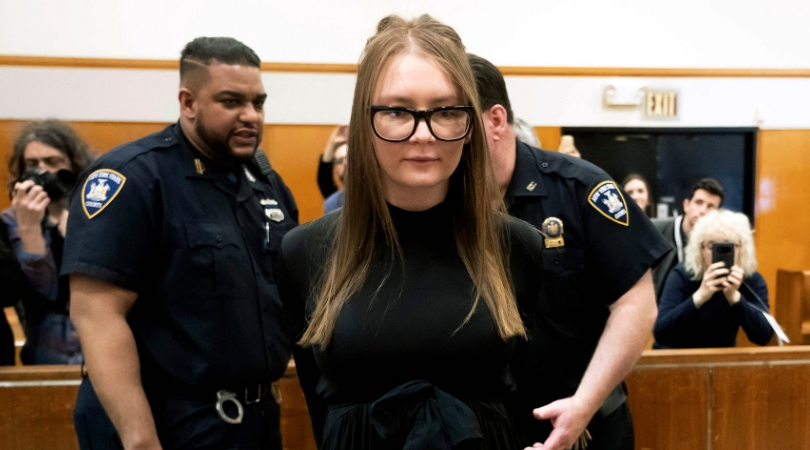 NEW YORK (AP) — Anna Sorokin, the German con artist who passed herself off as a wealthy heiress to swindle banks, hotels and even close friends as she lived out a high-society, Instagram-ready fantasy in New York, was sentenced Thursday to four to 12 years in prison.

The 28-year-old, who had played with her own tabloid image during the trial by wearing stylish dresses to court, looked despondent as the verdict was announced. She pressed her hand to her face and squeezed her eyes shut, appearing to hold back tears.

Judge Diane Kiesel said Sorokin had been “blinded by the glitter and glamour of New York City” as she turned to fraud to finance a life she could never afford. But the judge turned down a request by Sorokin’s lawyers to sentence her to the time she has already spent in jail awaiting trial. “I am stunned by the depth of the defendant’s deception,” Kiesel said, adding that she hoped to send a message to Sorokin’s internet following “that her behavior is unacceptable.”

Only one financial exec in this country ever went to prison for the '08 global meltdown. Anna Sorokin, the fake heiress who bilked rich pals and banks out of … $200,000 faces 15 yrs. Is that justice? https://t.co/TAhihKrUp5

“Certainly she didn’t think about the people she scammed,” the judge added.

The sentencing capped a spectacular case that drew international attention and tabloid headlines. Netflix and HBO are both working on shows based on Sorokin’s audacious efforts to finagle her way into the Manhattan socialite scene. She was convicted last month on multiple counts of larceny and theft and has been in custody since her October 2017 arrest— time behind bars that will be credited toward her sentence. The judge also ordered Sorokin to pay nearly $200,000 in restitution and a $24,000 fine.

U.S. Immigrations and Customs Enforcement said it will seek to deport Sorokin to Germany following her release from state prison. Moments before she was sentenced, Sorokin briefly addressed the court, saying, “I apologize for the mistakes I made.” Her defense attorney, Todd Spodek, told a gaggle of reporters that Sorokin was “holding up OK.” He described the prison sentence as “expected” but said Sorokin will pursue an appeal. “She’s a tough woman,” Spodek said, noting she has been at Rikers Island for more than 500 days.

Anna Sorokin, who made headlines for pretending to be a socialite and conning people out of thousands, was just sentenced to 4-12 years in prison pic.twitter.com/LswB6B2d8H

Sorokin forged a new identity — Anna Delvey — and defrauded financial institutions and Manhattan celebrities into believing she had a fortune of $67 million (60 million euros) overseas that could cover her jet-setting lifestyle , high-end clothing and lavish hotel stays. She falsely claimed her father was a diplomat or an oil baron and falsified bank records. In fact, her father told New York magazine he’s a former trucker who runs a heating-and-cooling business.

Her ruse included an application for a $22 million loan to fund a private arts club, complete with exhibitions, installations and pop-up shops, prosecutors said. She was denied that loan but persuaded one bank to lend her $100,000 that she failed to repay.

In all, prosecutors accused her of stealing some $275,000, including a $35,400 bill she failed to pay for a plane she chartered to and from the Berkshire Hathaway shareholders meeting in Omaha, Nebraska. She went to great lengths to ensure others paid her way, even as she had “not a cent to her name, as far as we can determine,” prosecutor Catherine McCaw said following Sorokin’s arrest.

ICYMI: Anna Sorokin, who pretended to be a wealthy heiress in order to con New York City's societal elite, was sentenced to 4 to 12 years in prison pic.twitter.com/U5kbBLTfBb

“An ordinary person would just take coach,” McCaw told Kiesel at Thursday’s hearing. “The defendant did not want an ordinary life, and she was willing to steal in order to get that.” The jury convicted Sorokin of four counts of theft of services, three counts of grand larceny and one count of attempted grand larceny.

Jurors acquitted her of two counts, including an allegation that she promised a friend an all-expenses paid trip to Morocco and then stuck her with the $62,000 bill. She was also found not guilty of one of the most serious charges in the indictment: attempting to steal more than $1 million from City National Bank.

Spodek argued that Sorokin had been “buying time” and always intended to settle her debts. He portrayed her as an ambitious entrepreneur and said she lacked criminal intent. McCaw rejected that characterization, saying Sorokin showed “almost no remorse” throughout the proceedings. The prosecutor said Sorokin seemed to revel at the plight of her victims and showed more concern for her attire than the emotions of those she hurt.