ATLANTA (AP) — As Atlanta prepares to host the Super Bowl, artists there are painting murals that highlight the city’s civil rights and social justice legacy.

The artwork adorning neighborhoods near the downtown stadium where the game will be played is part of an initiative called “Off The Wall: Atlanta’s Civil Rights and Social Justice Journey.” The project is a collaboration between arts advocacy group WonderRoot and the Super Bowl host committee. While the murals’ installation was timed to coincide with the Feb. 3 sports extravaganza, they are meant to be lasting public works of art for Atlantans to enjoy long after the football fans have left.

The idea was to celebrate Atlanta’s role in the civil rights struggle of the 1950s and 1960s and connect that rich legacy with more contemporary struggles for justice and equality, WonderRoot executive director Chris Appleton said. “We definitely have works that, for good reason, make Atlanta proud of its role in the civil rights movement and the human rights movement, and we have murals that invite and challenge us in Atlanta to continue striving for that beloved community,” Appleton said.

The term “beloved community” was made popular by the Rev. Martin Luther King Jr., an Atlanta native, to describe a society centered on equal opportunity and justice and rooted in the philosophy of nonviolence. Several dozen “community conversations” brought out unheard and untold stories about the struggle for justice that needed to be elevated, Appleton said. The artists sat in on those conversations and used them to inform their mural designs, which then went through two rounds of community feedback.

“I really believe the artists have done a great job of amplifying and complexifying narratives around justice issues in Atlanta and beyond,” Appleton said. “The murals, as a collection, are celebratory in some cases, are aspirational in some cases and are rooted in truth-telling.”

A nomination and selection committee invited artists from around the country to apply, and the panel chose 10 applicants. An 11th spot, dubbed “Atlanta’s choice,” was open only to Atlanta area artists and was voted on by the public. In total, they plan to install roughly 30 murals.

Muhammad Yungai, the muralist selected by public vote, drew inspiration from a community conversation held at Spelman College, where he learned about students who volunteered at a nearby community farm. His mural, “Community Roots,” is on a wall in Atlanta’s Castleberry Hill neighborhood. It showcases actual students from four historically black colleges and universities in Atlanta — Spelman, Morehouse, Clark Atlanta and Morris Brown — and the produce they help grow. He wanted to shine a light on the four schools, which sit a stone’s throw from Mercedes Benz Stadium, where the Super Bowl will be played, and on urban farming and community gardening.

The 44-year-old middle school art teacher and professional muralist said his work often focuses on education. “I believe education is the biggest thing that we can do as a culture to ensure that everyone can achieve the life they want,” Yungai said. Shanequa Gay, 40, was inspired by a community conversation at Covenant House, which provides housing and support for homeless young people. Her mural, “Excuse me while I kiss the sky,” adorns the walls of the Vine City transit station, across the street the stadium.

Gay said she wanted to represent people who sleep under the trees and bushes. Dark outlines of leaves and flowers that she said are inspired by Georgia’s abundant vegetation are layered over brightly colored profiles of young people she met at Covenant House.

“I went and took photographs of these young people making kissy faces to kind of humanize homelessness because we don’t attribute kissing with being homeless — or joy or laughter or young people,” she said. 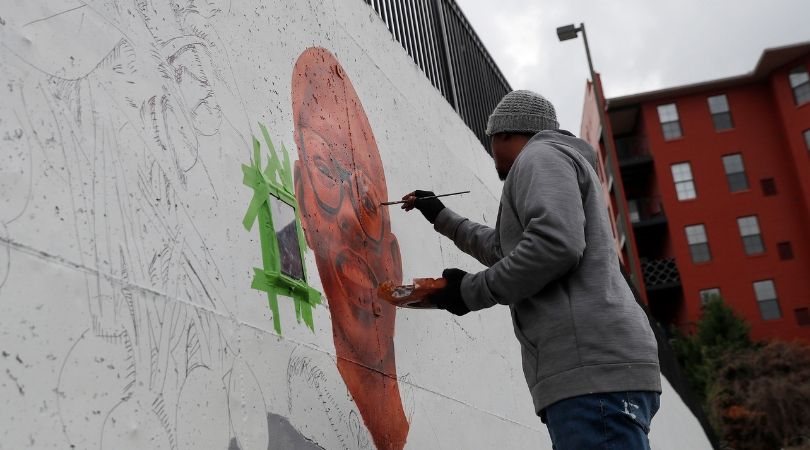