‘C u in Court’: Text Messages Now Remind Defendants to Show Up 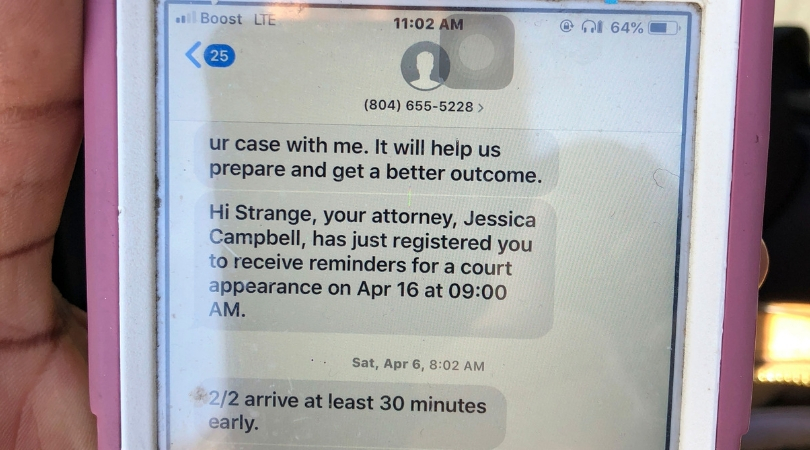 RICHMOND, Va. (AP) ? C u in court. Courts around the country are embracing text messages as a way to nudge people into showing up for their hearings.

On any given day, up to half of defendants fail to show up for their scheduled proceedings. No-shows cost the courts time and money, and can cost defendants their freedom. Public defenders and court administrators are using text reminders in more than a dozen states, including Virginia, California, Pennsylvania, Maryland, Florida and Washington.

Richmond Public Defender Tracy Paner said the reminders have been a huge help to her clients, who are often struggling with poverty and chaotic family lives, in addition to dealing with the fallout from an arrest. Missing a court date can spur a judge to issue a bench warrant, which can lead to a citation or arrest, fines and even jail time.

“If you’re hustling and you don’t know how you’re going to pay your rent and looking for a job and wondering where you are going to get food, kind of the last thing on your mind is your court date,” Paner said. “If we can help with that, that’s easy for us.”

In Richmond and Petersburg, the Virginia Indigent Defense Commission used a grant to set up a pilot program. The commission contracted with Uptrust, a San Francisco-based company whose software integrates with the public defender’s case management software to access the names, cellphone numbers, court dates and other information to track cases.

Uptrust’s software builds a schedule of reminders for each defendant and automatically sends texts on those dates. The messages are typically sent 10 days, one week and one day before a scheduled hearing. Some texts also include customized messages reminding people to seek time off from work, arrange for child care and figure out how they will get to court.

One of the main goals is to reduce failure-to-appear rates. In New York City, researchers who studied a pilot program found that from March 2016 to June 2017 text messages that combined information on planning, what to expect and the consequences of not going to court led to a 26 percent drop in the number of no-shows.

Text messages were initially used by some courts to remind people to report for jury duty, said Bill Raftery, a senior analyst with the National Center for State Courts. After Michael Brown was shot by police in Ferguson, Missouri, in 2014, a Justice Department investigation focused attention on the practice of issuing fines and other penalties for failing to appear in court, even for minor traffic charges.

“There was then this idea that the court itself should notify the defendant directly, and one of the ways to do that was through a known mechanism, the person’s cellphone,” Raftery said.

“If you don’t know how you’re going to pay your rent and looking for a job and wondering where you are going to get food, kind of the last thing on your mind is your court date.” https://t.co/Ha5eOlqP9v

In Arizona, after court administrators started a pilot program last year, the text reminders for criminal court hearings helped reduce the number of failure-to-appear warrants issued in Scottsdale Municipal Court by 51.9% during its first three months.

“We don’t want to have a person not show up and have that time wasted,” said David Byers, director of the Administrative Office of the Arizona Courts. “This is an attempt to get it taken care of without the consequences cascading into a complete catastrophe for someone.”

Uptrust charges an initial fee of $10,000 to $20,000 and a $2 fee for each person who receives text reminders. A text from the Richmond Public Defender’s Office recently prevented 25-year-old Strangé Simon from missing her court hearing on a marijuana possession charge.

“I thought my court date was the 20th, but it was the 16th,” Simon said. “When I got the text, I was like, oh, my goodness, I am happy because I didn’t know that at first.” In Spokane, Washington, public defenders began using use a texting system in September, not only for court date reminders, but also to let defendants know there’s a daycare facility inside the courthouse where their children can stay while they’re in court.

Thomas Krzyminski, director of the Spokane County Public Defender’s Office, said he likes that the system also allows defendants to text their attorneys with any questions. “Clients will say, ‘I didn’t hear enough from my lawyer. I didn’t know what was going on. This is just a very simple way to stay connected,” Krzyminski said.

Cherise Fanno Burdeen, chief executive officer of the Pretrial Justice Institute, said using text reminders is part of a larger effort to reform bail and other parts of the criminal justice system that can be overly punitive for people who have been charged, but not yet convicted.

“Court reminders alone may help some people, but court reminders have to be part of a comprehensive view of how we are interacting with people,” she said.

Watch: How Much Does Miami’s Turnover Chain Actually Cost?