Grand Canyon Celebrates 100 Years as a National Park in 2019 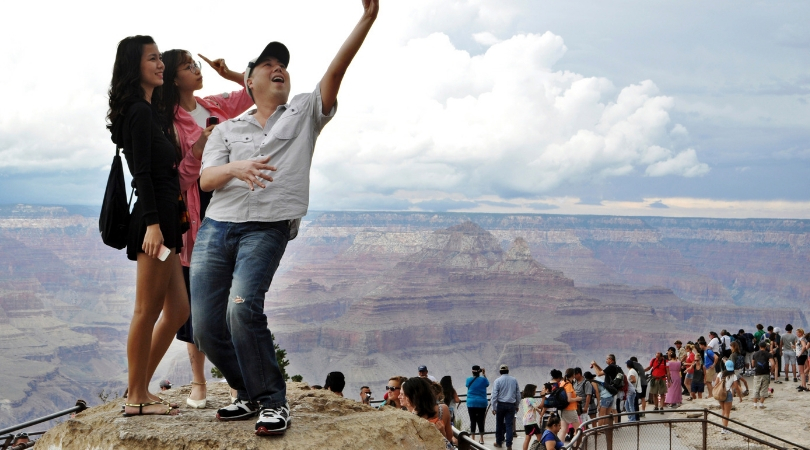 FLAGSTAFF, Ariz. (AP) ? The first European American who reached the Colorado River in the Grand Canyon marveled at what was before him: an astounding system of canyons, profound fissures and slender spires that seemingly tottered from their bases.

The scenery wasn’t enough to convince Lt. Joseph Christmas Ives that anyone would visit after his group that set out in a steamboat wrapped up an expedition in 1858. “Ours has been the first and, doubtless, will be the last party of whites to visit this profitless locality,” he wrote. “It seems intended by nature that the Colorado River along the greater portion of its lonely and majestic way shall be forever unvisited and undisturbed.”

The Grand Canyon Being here was so amazing. I’ve been wanting to visit the Grand Canyon for a long time. I can’t believe how massive it is! Also, it was VERY cold haha. I think we were expecting better weather during this trip, but we totally didn’t prepare for this cold weather. I’m so glad I brought this @sierradesigns jacket with me, because I’ve worn it every day! It’s so warm. Yesterday we drove from Sedona to @petrifiedforestnps but it was closed.. we were super bummed!! We’ve had to rearrange our trip a little to adjust to unplanned events, but that’s all part of a good road trip! Today we’re in Chinle, Arizona and are about to go see Canyon De Chelly. After that we’re on to Monument Valley! #doingthings #grandcanyon #nationalparks #roadtrip #adventurer #artist #artistsoninstagram

That clearly wasn’t the way things worked out, and the Grand Canyon in 2019 will celebrate its 100th anniversary as a national park. Despite a federal government shutdown that has closed some other U.S. national parks, the Grand Canyon has remained open because Arizona decided to supply money needed to keep trails, shuttles and restrooms open.

It now draws more than 6 million tourists a year who peer over the popular South Rim into the gorge a mile (1.6 kilometers) deep, navigate river rapids, hike the trails and camp under the stars.

Early explorers came on boat, foot and horseback often with the help of Native American guides. The wealthy traveled by stagecoach in a two-day trip from Flagstaff to the southernmost point on the canyon’s South Rim in the 1880s. The first passenger train rolled in from Williams in 1901, but the railroad was more interested in mining copper than carrying tourists. The automobile became the more popular way to reach the Grand Canyon in the 1930s.

Early entrepreneurs charged $1 to hike down the Bright Angel Trail used by the Havasupai people whose current-day reservation lies in the depths of the Grand Canyon, developed camping spots and built hotels. Tourists paid for drinking water, to use outhouses and for curios in a tent pitched at the South Rim. Ralph Cameron, a prospector for whom the Navajo Nation community of Cameron is named, was one of the major opponents of naming the Grand Canyon a national park because he saw how much money could be made from tourism.

President Woodrow Wilson signed legislation to create the park in 1919 but Teddy Roosevelt is credited for its early preservation as a game reserve and a national monument. He famously said: “Leave it as it is. You cannot improve on it. The ages have been at work on it, and man can only mar it.”

Centennial events will include Roosevelt impersonators, a historical symposium, a living history week and efforts to get visitors beyond the South Rim by showcasing lesser-known sites on social media. The park’s actual birthday is Feb. 26, when a celebration is scheduled at the South Rim, with other events at other locations programmed for later in the year. Vanessa Ceja Cervantes, one of the centennial coordinators, said the park will broadcast ranger talks, the founder’s day event and other virtual tours throughout the year.

This was one of my most memorable memories of 2018 — FINALLY scoring Havasupai permits after trying the last several years. This is no special photo and an angle you’ve definitely seen before, but I still needed it for myself. Fingers crossed to visit again in 2019. What permits do you have your eyes on for this next year? We’re still trying to decide.✨ ________________________________________ . . . . #beautifulviews #adventurevisuals #folkscenery #mountainstones #mountainlife #visualsofearth #tourtheplanet #havasufalls #folkcreative #desertlife #eclectic_shotz #welltravelled #hikeAZ #arizonacollective #havasupai #bevisuallyinspired #wildernessculture #liveyouradventure #ourcamplife #amongthewild #ig_shotz #sonya7iii #sonyalpha #grandcanyon

“A lot of our visitors come for the day and they’re drawn here for this amazing landscape,” she said. “But we really want to give them reasons to stay, to learn about the geology, the natural resources, cultural or historic because there’s something here for everyone.”

Visitors might even learn about the Apollo 11 astronauts who trained at the Grand Canyon, a spotted skunk there who does a handstand when it feels threatened, a commercial airline crash that spurred the creation of the Federal Aviation Administration or the story of a heart-shaped rock embedded in wall for a hotel waitress.

Before Grand Canyon became a national park, the land was home to and visited frequently by Native American tribes. As the story goes, Spanish explorers reached the canyon in the 1540s, led by Hopi guides. They descended into the canyon but misjudged its depth and vastness, turning back before they could reach the Colorado River. Their reports likely deterred others from exploring the region for centuries.

Gertrude Smith, who works in the cultural office for the Yavapai-Apache Nation in Camp Verde, said tribes continue to revere the Grand Canyon as a place of emergence and where they forage for plants and nuts, and hunted before it became outlawed. “People do forget the Native people were the first people to dwell in these places and use the resources,” she said.

Wayne Ranney, the immediate past president of the Grand Canyon Historical Society, moved to Phantom Ranch to work as a backcountry ranger in 1975, a job that would create a bond with his paternal grandfather who first visited Grand Canyon National Park in 1919. He worked for the railroad and could get a roundtrip ticket for $5, Ranney said.

In the years after World War II ended, the National Park Service began to modernize places like the Grand Canyon. The gorge hit 1 million visitors annually in 1956, a number that has only grown since. “Its popularity is never diminished,” Ranney said. “For most people, even though it may be crowded when they visit, they still come away with a feeling of awe.”

Watch: After 100 Years of National Park Services we Have Lots to Celebrate