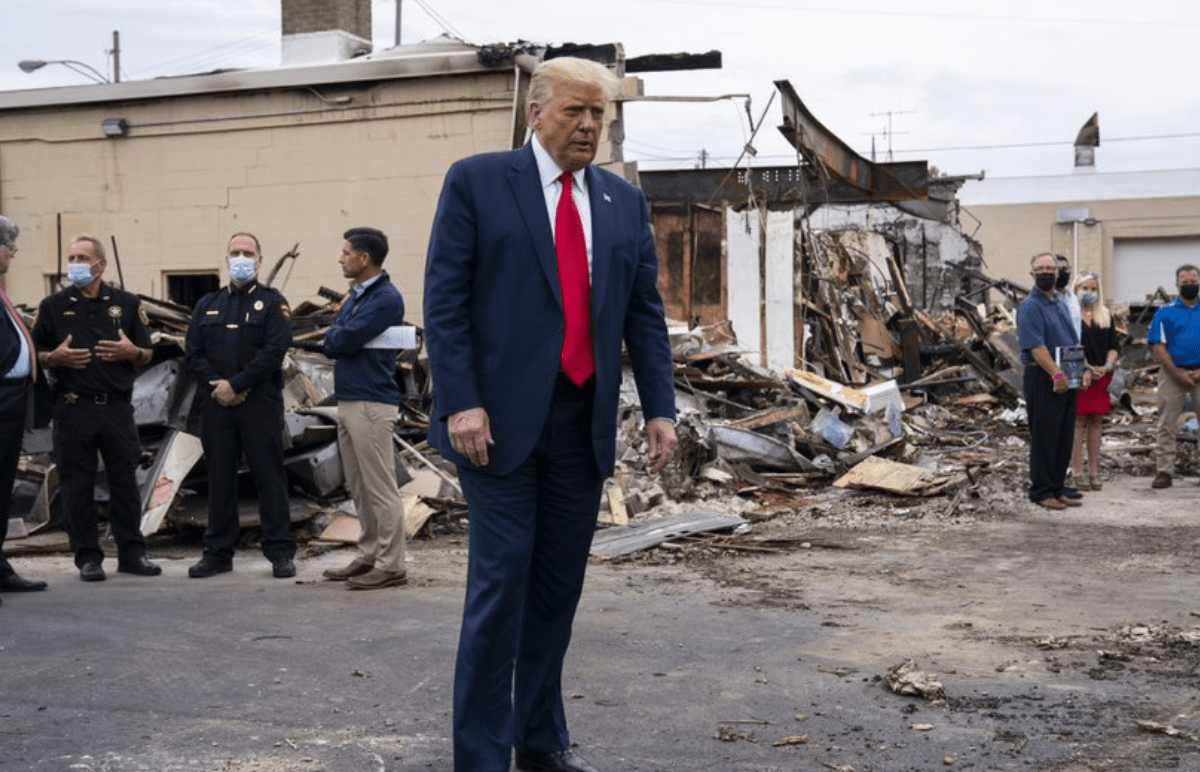 The owner of a camera shop that was destroyed during unrest in Kenosha and highlighted during President Donald Trump’s visit says the president used his store for political gain by appearing with a former owner of the business while touring the epicenter of the latest eruption over racial injustice.

Tom Gram said he bought Rode’s Camera Shop from the Rode family eight years ago, though John Rode still owns the property. Gram’s four decades of work at the store came to an end Aug. 24, when the building was destroyed by fire during protests over the police shooting of Jacob Blake.

Gram said he got a call Monday from the White House asking if he would join the president on a tour that would showcase the destruction to the business, but Gram rejected the offer. And he said Trump’s references to Rode as the owner of the business were deceptive.

“I think everything he (Trump) does turns into a circus and I just didn’t want to be involved in it,” Gram told Milwaukee station WTMJ-TV.

The White House, however, noted Wednesday that Rode and his family founded and built Rode’s Camera Shop before World War II and still own the building that houses the shop. Trump didn’t visit the site of the shop, but Rode met with him a few blocks away and participated in a roundatble with the president.

Democratic presidential nominee Joe Biden and his wife, Jill, planned to be in Kenosha on Thursday, they announced a day after Trump was there. Biden plans to hold a community meeting and make another stop at an undisclosed location, the campaign said. This will mark Biden’s first campaign stop in Wisconsin as the presidential nominee and his first in the state since October 2018.

Trump’s visit came over the objections of state and local leaders. Kenosha has seen protests since Aug. 23, when police shot Blake, a Black man, seven times in the back. On Monday, Trump defended a 17-year-old supporter, Kyle Rittenhouse, who is accused of fatally shooting two demonstrators in Kenosha on Aug. 25 and wounding a third.

Also Tuesday, Rittenhouse’s attorney John Pierce tweeted a video of him speaking by phone with Rittenhouse from jail in Illinois, where he was arrested.

“I just want to thank every single one of you from the bottom of my heart for the underlining support, it’s just amazing,” Rittenhouse said from the phone held up by Pierce. “I want to thank all of you for the meal I’ve been receiving. It’s been really helpful. I just want to let you all know that I’m going to be out of here soon and stay strong. And I hope to see you guys soon.”

Pierce reiterated that his position that Rittenhouse was acting in self defense.

Trump emphasized his “law and order” campaign message during his stop in Kenosha on Tuesday, where he thanked police for their efforts but did not meet with anyone from the Blake family.

Meanwhile, four people arrested during demonstrations in Kenosha filed a federal civil rights lawsuit, alleging that local law enforcement only arrested those who were protesting against police brutality, not “pro-police protesters and militia” who were freely roaming the streets armed with rifles.

The lawsuit, filed Tuesday, claims that enforcement of a curfew from 7 p.m. to 7 a.m. violates First Amendment free speech rights and equal protection rights and asks that the curfew no longer be enforced and be found unconstitutional.

“In Kenosha, there are two sets of laws — one that applies to those who protest police brutality and racism, and another for those who support the police,” the lawsuit said.

Attorneys for the city of Kenosha and Kenosha County, which were named as defendants, did not immediately return messages seeking comment Wednesday.

The lawsuit includes widely circulated cellphone video from the night of Aug. 25 showing law enforcement officers in armored vehicles handing bottles of water to civilians armed with rifles and thanking them. One of the people seen in that video is Rittenhouse, who faces charges of first-degree homicide.

In the video, police appear to be clearing out protesters while allowing the gun-carrying civilians who said they were there to protect the property to remain.

Those bringing the lawsuit are represented by North Carolina civil rights lawyer Kimberly Motely, who also represents Gaige Grosskreutz, the man prosecutors say was shot in the arm by Rittenhouse.

After Tuesday’s visit by Trump, Gram said he was surprised to see the camera store’s former owner on TV with Trump with the president introducing him at the roundatble as “John Rode III, owner of Rode’s Camera Shop.”

“I just appreciate President Trump coming today, everybody here does,” Rode said. “We’re so thankful we got the federal troops here. Once they got here things did calm down quite a bit.”

“A day earlier would have saved his store,” Trump responded.

Wisconsin Democratic Gov. Tony Evers deployed the National Guard to quell demonstrations following the shooting. But Trump is taking credit for the deployment, even though his demand that Guard troops be used came a day after Evers had activated them.