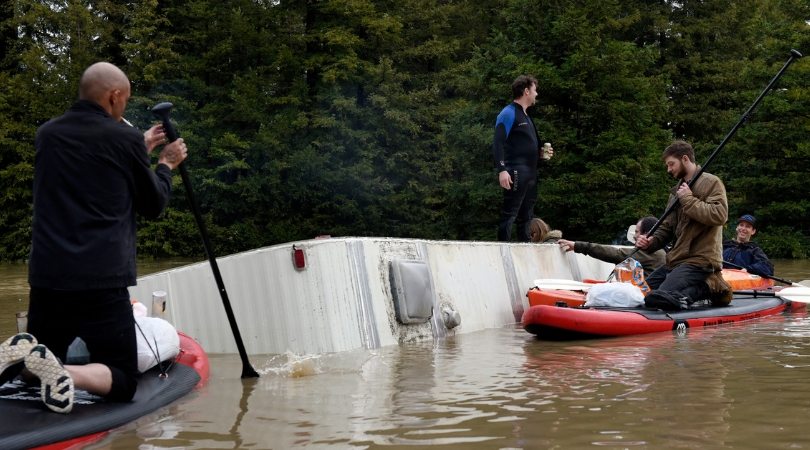 Authorities in Northern California say a man drowned in floodwaters trying to get to his home, where three children were trapped. The Humboldt Sheriff’s Office says in a statement Thursday that deputies were sent Wednesday night to the house in Ferndale, about 200 miles (322 kilometers) north of two California towns cut off by water from a river that broke its banks.

It says the man was walking to his home from a barn through up to 5 feet (1.5 meters) of water when he was carried away by the fast-moving current. Authorities found his body Thursday. His name has not been made public.

The office says three people tried to reach the man by driving a tractor through the floodwaters but the tractor stalled and they couldn’t get to him in time. It says deputies in a boat rescued the three people from the tractor and the children from the home.

Floodwaters that turned two Northern California communities into islands have started receding after inundating about 2,000 buildings.

The Russian River in wine country north of San Francisco reached about 46 feet (14 meters) Wednesday night, its highest level in 25 years. The water is not expected to return to the river’s banks until late Thursday. The Sonoma County Sheriff’s Office said in a statement Thursday that officials received no calls for help overnight from hundreds of people who stayed in their homes instead of heeding evacuation orders.

The town of Guerneville and neighboring community Monte Rio are cut off by flooded roads. Some places were standing in 8 feet (2.44 meters) of water. About 3,500 people living near the river were told to evacuate. Residents who stayed said flooding is not uncommon in the area and they were prepared to weather the storm.

A flooded river that swamped some 2,000 homes and other buildings in Northern California is expected to begin receding now that days of rain have eased.

The Russian River in the wine country north of San Francisco reached its highest level in 25 years Wednesday night and Sonoma County officials say it won’t return to its banks until late Thursday. Meanwhile, the town of Guerneville and neighboring Monte Rio are described as islands ? cut off by flooded roads. Some places were standing in 8 feet (2.44 meters) of water.

About 3,500 people along the river remain under evacuation orders. Elsewhere, the storms that scoured the western U.S. dumped heavy rain and snow. In Montana, the governor signed an emergency order to help keep up the supply of heating fuel.