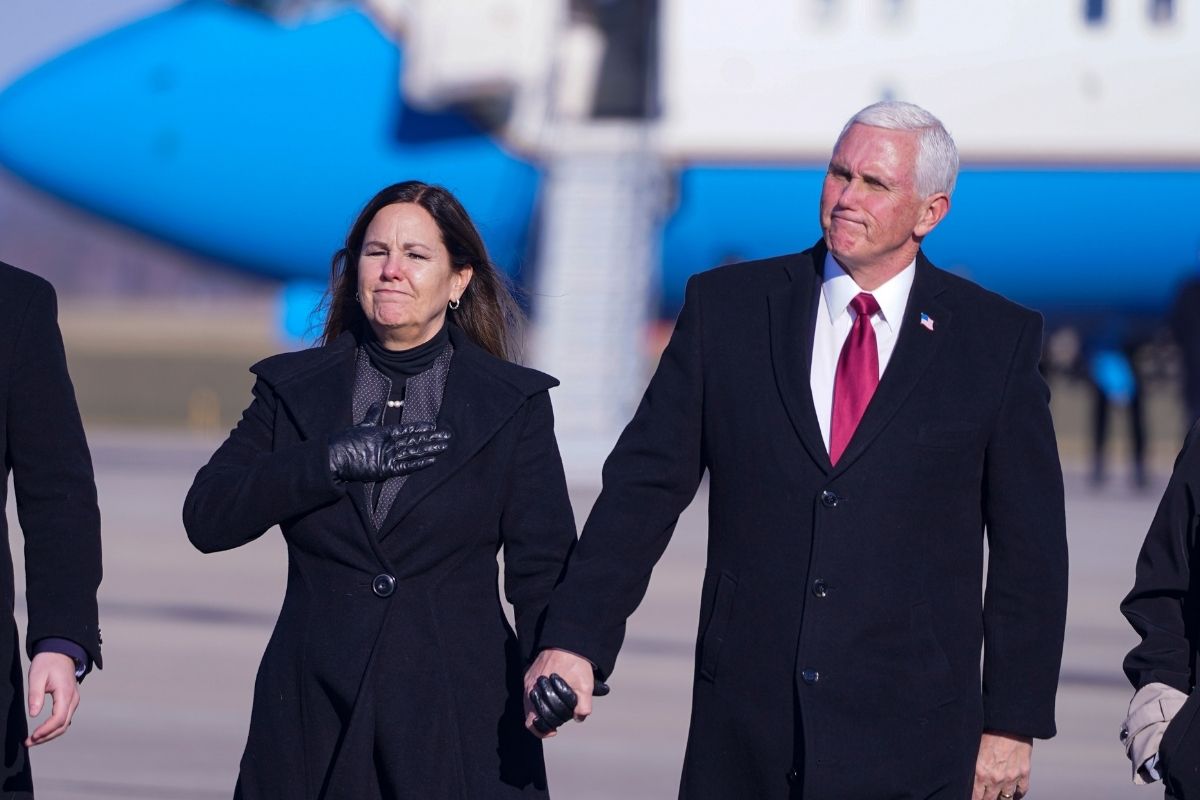 WASHINGTON (AP) ? When former President Donald Trump was asked to list those he considers the future leaders of the Republican Party, he quickly rattled off names including Florida Gov. Ron DeSantis and Sens. Josh Hawley and Ted Cruz. Conspicuously absent from the list: Mike Pence.

The former vice president is steadily reentering public life as he eyes a potential run for the White House in 2024. He’s joining conservative organizations, writing op-eds, delivering speeches and launching an advocacy group that will focus on promoting the Trump administration’s accomplishments.

Where is Mike Pence Now?

But Trump’s neglect in mentioning Pence during a podcast interview earlier this month signals the former vice president’s unique challenge. For someone who built a reputation as one of Trump’s most steadfast supporters, Pence is now viewed with suspicion among many Republicans for observing his constitutional duty in January to facilitate a peaceful transfer of power to the Biden administration, a decision that still has Trump fuming.

To prevail in a Republican presidential primary, Pence may have to reinforce his loyalty to Trump while defending his decisions during the final days of the administration when the president falsely alleged widespread voter fraud, contributing to a deadly riot at the U.S. Capitol. If anyone can achieve this awkward balance, some Republicans say, it’s Pence.

?Anybody who can pull off an endorsement of Ted Cruz and become Donald Trump’s vice presidential nominee should not be counted out,” said Republican strategist Alice Stewart, who worked for Cruz’s 2016 presidential campaign when Pence endorsed him. ?He has a way of splitting hairs and threading the needle that has paid off in the past.”

Mike Pence Claims He ‘Maintains A Strong Relationship’ With Trump

Pence aides generally brush off talk of the next presidential election. They insist he is focused on his family and next year’s midterm elections, when Republicans are well positioned to regain at least one chamber of Congress. Allies argue that, over time, the anger will subside.

?I think 2024?s a long time away and if Mike Pence runs for president he will appeal to the Republican base in a way that will make him a strong contender,” said Republican Rep. Jim Banks of Indiana, who chairs the conservative Republican Study Committee and has already endorsed a Pence 2024 run. ?If and when Mike Pence steps back up to the plate, I think he will have strong appeal among Republicans nationwide.?

Pence declined to comment for this story. For their part, Trump aides warn against reading too much into the omission during the podcast interview.

?That was not an exclusive list,? said Trump adviser Jason Miller. Still, Trump continued to deride Pence in the interview, falsely claiming Pence had the authority to unilaterally overturn the results of the election, even though he did not.

Trump has not said whether he will seek the White House again in 2024. If he doesn’t, other Republicans are making clear they won’t cede the race to Pence. Former Secretary of State Mike Pompeo, for instance, is already visiting the critical primary states of Iowa and New Hampshire.

Since leaving office in January, Pence, who served as Indiana’s governor and a member of Congress before being tapped as Trump’s running mate, has kept a lower profile. He’s pieced together a portfolio aimed at maintaining influence, paying the bills and laying the groundwork for an expected presidential run.

He’s forged a partnerships with the conservative Heritage Foundation and has even been discussed as a potential president of the organization, according to two people familiar with the discussions. He’s joined the Young America?s Foundation and a top speakers’ bureau, penned an op-ed for the Daily Signal in which he perpetuated falsehoods about the 2020 election, and recently toured a Christian relief organization in North Carolina. He will make his first public speech since leaving office next month at the Palmetto Family Council’s annual fundraiser in South Carolina, another crucial primary state.

Pence has also discussed writing a book, according to aides, has been in continued conversation with his evangelical allies, and plans to spend much of the next two years helping Republican candidates as they try to reclaim House and Senate majorities in 2022. He’s also planning to launch an advocacy organization that aides and allies say will give him a platform to defend the Trump administration’s record and push back on the current president’s policies as he tries to merge the traditional conservative movement with Trumpism.

?He?s doing what he needs to be doing to lay the groundwork in the event he wants to set up an exploratory committee,? Stewart said. ?You have to make money, lay the groundwork, gauge the support and then pull the trigger.”

Pence?s allies see him as the natural Trump heir, someone who can keep his base engaged while winning back suburban voters who left the party in droves during the Trump era. ?Obviously Mike Pence has a very different persona, a very different tone. That probably is an understatement,? said former Wisconsin Gov. Scott Walker, a longtime friend who now leads the Young America?s Foundation. “As long as he can still talk about the things that Trump voters care about, but do so in a way that?s more reflective of kind of a Midwesterner, that I think … would be attractive to those voters.?

Skeptics, meanwhile, see another old, milquetoast white man saddled with Trump?s baggage, but without his charisma. For these critics, Pence is a sycophant who debased himself for four years to avoid Trump?s wrath ? only to take the blame when Trump insisted, wrongly, that Pence could unilaterally overturn the results of the 2020 election.

The anger at Pence took a dangerously personal turn on Jan. 6 when rioters paraded through the Capitol chanting ?Hang Mike Pence? as a mob outside set up a makeshift gallows. During Trump’s impeachment trial for sparking the insurrection, video was presented showing Pence being rushed to safety, sheltering in an office with his family just 100 feet from the rioters.

Signs that many in the GOP still hold Pence responsible for losing the election have dotted the highway in many Trump strongholds, where masking tape and markers block out his name on Trump-Pence flags and lawn signs.

Meanwhile, others, like Pompeo, are trying to claim the Trump mantle without as much baggage. ?In many ways I think his future?s in Trump?s hands,? longtime Republican pollster Whit Ayres said of Pence. If Trump publicly praises Pence as a loyal lieutenant, Ayers said, he can see him being a viable candidate. But if Trump continues to publicly blame Pence for their loss in November, ?he?s toast,? Ayres said.

In the meantime, Pence has tried to project the impression that he and the former president have mended fences, referencing their conversations at a meeting last month with members of the conservative Republican Study Committee. Pence and Trump have spoken multiple times since leaving office, according to aides for both men.

?He was very complementary of President Trump and he told us that he and President Trump had been talking and reminiscing about the great accomplishments of the administration and all of that,? said Rep. Mike Johnson, R-La., who attended.

While Johnson acknowledged the tensions during the final days of the administration ?obviously adds a degree of difficulty” for Pence, he argued that the former vice president could overcome trepidation with a focus on Trump?s policy achievements.

?He helped achieve those and so lays claim to that legacy,? Johnson said.

?I think if he does get in he?s a viable candidate,? added Rep. Jeff Duncan of South Carolina, whose endorsement could provide Pence with a boost if he becomes a candidate. ?He?s a force to be reckoned with.?

Watch: ?Do You Miss Me Yet??: Donald Trump Crashes Wedding to Complain About Joe Biden