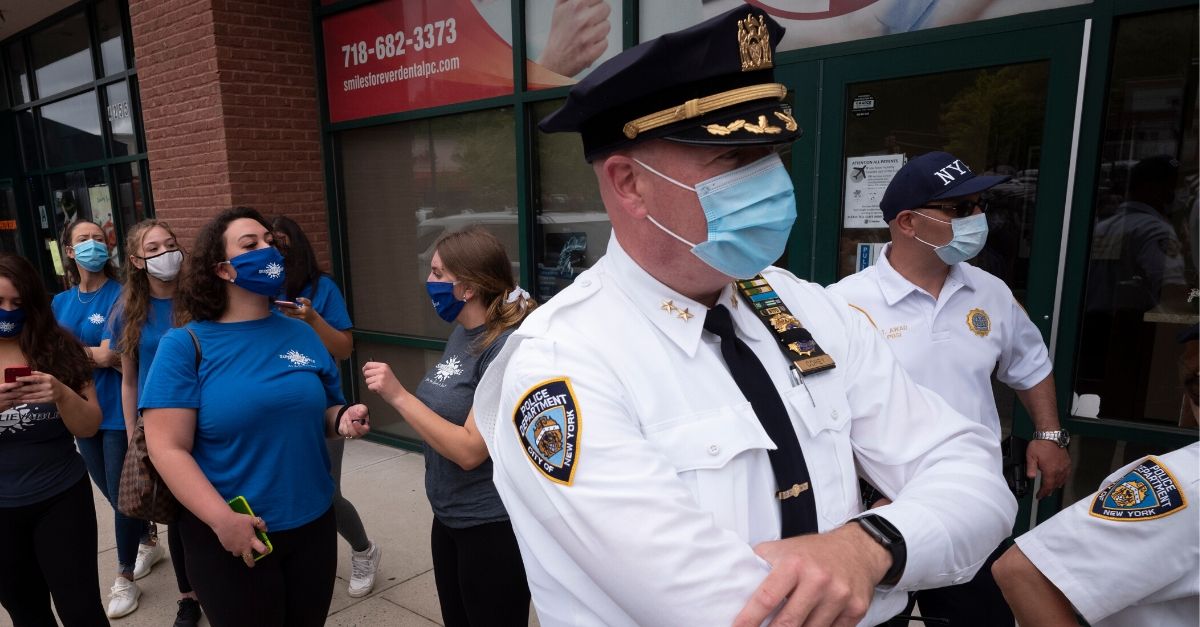 NEW YORK (AP) — Store owners with no-mask-no-service policies got a boost from the governor. New York City business owners planning to reopen before coronavirus restrictions are lifted got a warning from the mayor. Actors Rosie Perez and Chris Rock are promoting face coverings and virus testing.

NO MASK, NO SERVICE

Wow. In Staten Island, New York someone came to a grocery store without a mask. And other patrons drove them out. pic.twitter.com/WyitJVU9cx

Store owners who require customers to wear face coverings will now be backed up by an executive order from Gov. Andrew Cuomo.
The promised executive order authorizing businesses to deny entry to people without face-covering comes as outbreak-related restrictions on shops are beginning to loosen, though not yet in New York City.

Many stores already require people to wear masks to enter, but Cuomo spokesman Rich Azzopardi said the right of business owners to do that had not been made explicit in law. He said the order also gives local police the ability to enforce the rule.

Ted Potrikus of the Retail Council of New York State said the order “gives retailers helpful authorization to say, ‘This is our policy, you can’t come in.”’

“Retailers have, for the most part, made face masks a requirement for entry,” Potrikus wrote in an email, “but, as we’ve seen on Instagram and Facebook and Twitter, there are people out there who believe they can go into a store regardless of that store’s policy on masks.”

Cuomo said his new order will reduce conflicts between shop owners and customers who refuse to cover their faces.

Face coverings are already required in New York when people are out in public and near others.

Cuomo was joined by actors Rosie Perez and Chris Rock, who will star in ads urging New Yorkers to wear face coverings and to get tested for the virus now that testing is more widely available in hard-hit areas like Brooklyn, the site of Thursday’s briefing.

Perez said the new order would lessen also the anxiety of going into a store.

“It’s going to lessen, hopefully, the fights that are breaking out in stores when someone sees someone without a mask,” she said.

Rock admitted that he doesn’t confront people he sees on the street who aren’t wearing masks. Instead, “I give them a nice side-eye.”

New York recorded 74 new COVID-19 deaths for a second day in a row. There have been more than 23,700 deaths statewide since the start of the outbreak.

Hospitalization rates continued to fall, with an average of 163 admissions a day. More than 3,000 people a day were being hospitalized at the peak of the pandemic.

Chris Rock on helping NY Gov. Cuomo to get out the message about wearing a mask: “We’re soldiers for New York. It’s 100,000 dead Americans. I will go wherever I am called" https://t.co/qDjBrx9AGO pic.twitter.com/1YfnWGrARY

“No, businesses are not supposed to make up their own rules and jump the gun,” de Blasio said at his daily briefing on the virus.

New York City is the only jurisdiction in the state that has not met Gov. Andrew Cuomo’s guidelines for the first phase of New York’s four-part reopening process, including having enough contact tracers to monitor people exposed to the virus. De Blasio said he expects the city to enter Phase 1, including construction, manufacturing, and retail with curbside pickup, during the first two weeks of June.

Some merchants, including the owner of a Staten Island tanning salon, have said they planned on reopening this week. When the tanning salon owner tried to open on Thursday with the support of local politicians, police officers were on hand and issued him a summons that kept the operation closed.

De Blasio said businesses that reopen before they are supposed to will be told to close, and if they ignore orders to shut their doors, fines will be issued.

“I’m not into free agents,” de Blasio said. “I’m not into people deciding that they get to make the rules and they can do something everyone else can’t do.”

About the author: Michael Hill
Michael Hill is a writer for the Associated Press.
View More Articles