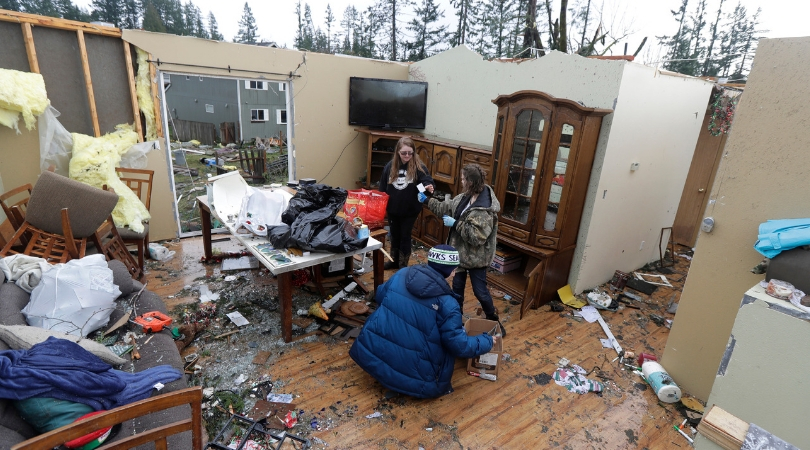 SEATTLE (AP) — An extremely rare tornado that touched down west of Seattle was the strongest to hit Washington state since 1986, the National Weather Service said Wednesday.

A Weather Service storm team surveyed the damage just south of Port Orchard, Washington, and rated the twister an Ef2 on the Enhanced Fujita scale with top wind speeds of up to 130 mph (210 kph). The scale rates an Ef2 as “significant.” In five minutes Tuesday afternoon, the twister’s 1.4 mile-path (2.3 kilometers) tore roofs off homes, shattered windows and toppled large fir trees, but no injuries have been reported.

John Mueller’s home was among those most severely damaged. He told KOMO-TV that he was at work at a shipyard when he recognized his home in a video of the tornado on social media.

“If I could describe the house, it would be roofless,” Mueller said. “The entire upstairs is gone. There’s 2×4 and 4x4s sticking out of the walls. Glass shattered everywhere. The downstairs is just full of water and broken glass…I think (the tornado) landed on top of the house.”

Kitsap County Search and Rescue workers with trained dogs checked for people who may have been injured or stranded but found none. Other emergency crews still inspecting homes were finding gas leaks in damaged structures, the sheriff’s office said Wednesday.

Power had been restored by Wednesday to much of the affected area with the exception of the most severely damaged homes, the sheriff’s office said. Some roads remained closed. Port Orchard is about 15 miles (24 kilometers) west of Seattle, across Puget Sound on the Kitsap Peninsula.