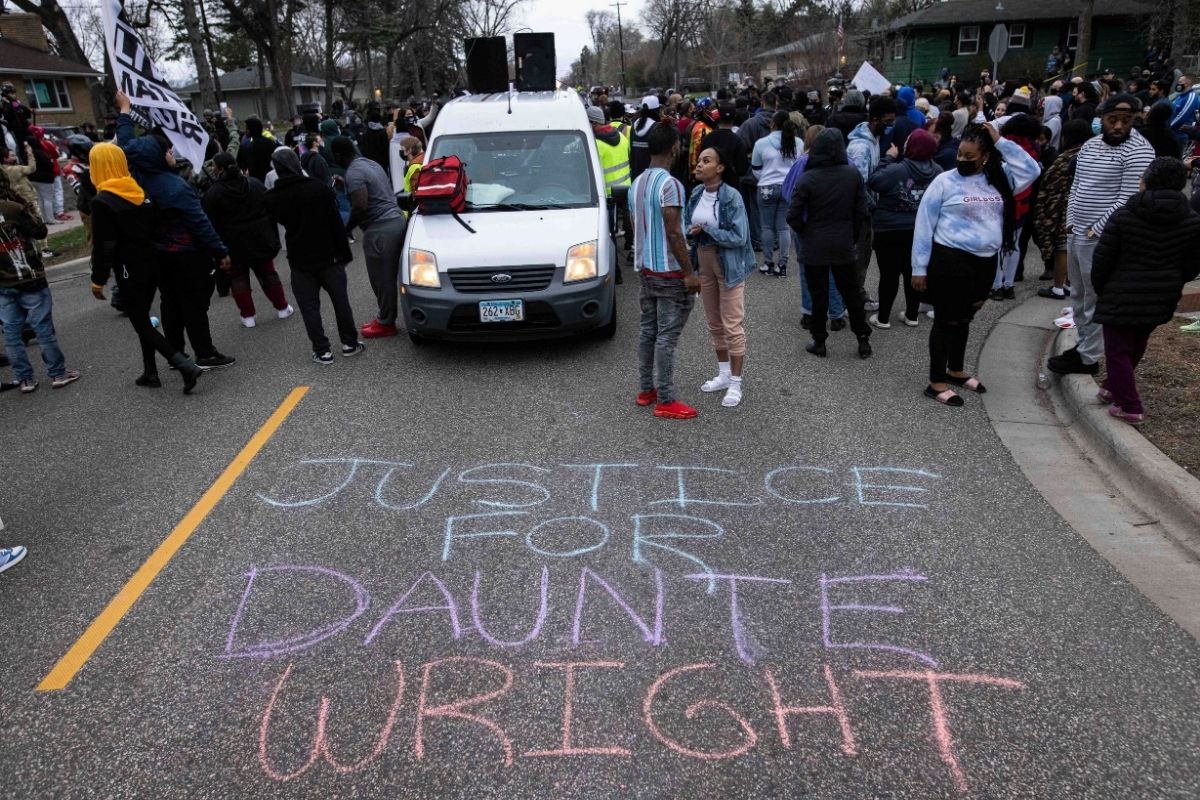 BROOKLYN CENTER, Minn. (AP) ? The police officer who fatally shot a Black man during a traffic stop in a Minneapolis suburb apparently intended to fire a Taser, not a handgun, as the man struggled with police, the city?s police chief said Monday.

Brooklyn Center Police Chief Tim Gannon described the shooting death Sunday of 20-year-old Daunte Wright as ?an accidental discharge.? It happened as police were trying to arrest Wright on an outstanding warrant. The shooting sparked violent protests in a metropolitan area already on edge because of the trial of the first of four police officers charged in George Floyd?s death.

After firing a single shot from her handgun, the car speeds away, and the officer is heard saying, ?Holy (expletive)! I shot him.?

?We do know that the anger pain and trauma amidst the black community is real,? Biden said from the Oval Office. But, he added, that ?does not justify violence and looting.?

Gannon said at a news conference that the officer made a mistake, and he released the body camera footage less than 24 hours after the shooting.

The footage showed three officers around a stopped car, which authorities said was pulled over because it had expired registration tags. When another officer attempts to handcuff Wright, a second officer tells Wright he’s being arrested on a warrant. That’s when the struggle begins, followed by the shooting. Then the car travels several blocks before striking another vehicle.

?As I watch the video and listen to the officer?s command, it is my belief that the officer had the intention to deploy their Taser but instead shot Mr. Wright with a single bullet,” Gannon said. “This appears to me from what I viewed and the officer?s reaction in distress immediately after that this was an accidental discharge that resulted in the tragic death of Mr. Wright.?

A female passenger sustained non-life-threatening injuries during the crash, authorities said. Katie Wright said that passenger was her son?s girlfriend.

The state Bureau of Criminal Apprehension was investigating.

Hennepin County Attorney Mike Freeman said any decision on charges against the officer will be made by the Washington County attorney under an agreement adopted last year by several county prosecutors aimed at avoiding conflicts of interest. Freeman has been frequently criticized by activists in Minneapolis over his charging decisions involving deadly use of force by police.

Gannon would not name the officer or provide any other details about her, including her race, other than describing her as “very senior.? He would not say whether she would be fired following the investigation.
?I think we can watch the video and ascertain whether she will be returning,” the chief said.

Court records show Wright was being sought after failing to appear in court on charges that he fled from officers and possessed a gun without a permit during an encounter with Minneapolis police in June. In that case, a statement of probable cause said police got a call about a man waving a gun who was later identified as Wright.?

Wright’s mother, Katie Wright, said her son called her as he was getting pulled over.

?All he did was have air fresheners in the car, and they told him to get out of the car,? Wright said. During the call, she said she heard scuffling and then someone saying ?Daunte, don?t run? before the call ended. When she called back, her son?s girlfriend answered and said he had been shot.

?We?re going to do everything we can to ensure that justice is done and our communities are made whole,” he said.
Wright’s family hired civil rights attorney Ben Crump, who represented the Floyd family in its $27 million settlement with the city of Minneapolis.

?This level of lethal force was entirely preventable and inhumane,? Crump said in a statement. ?What will it take for law enforcement to stop killing people of color??

Speaking before the unrest Sunday night, Wright?s mother urged protesters in Brooklyn Center, a city of about 30,000 people on the northwest border of Minneapolis, to stay peaceful and focused on the loss of her son.

Biden referred to her comments on Monday, saying “we should listen to Daunte?s mom calling for peace and calm.? The president said he had not yet called the family but that his prayers were with them.

National Guard members and state law enforcement personnel were to be deployed around the Twin Cities, and Minnesota Gov. Tim Walz announced a curfew from 7 p.m. Monday until 6 a.m. Tuesday for three counties that include Brooklyn Center, Minneapolis and the capital of St. Paul.

The governor warned those who choose to ?exploit these tragedies? with violence ?can rest assured that the largest police presence in Minnesota history? will be prepared to arrest law breakers.

Shortly after the shooting, demonstrators began to gather, with some jumping atop police cars. Marchers also descended on the Brooklyn Center Police Department, where rocks and other objects were thrown at officers, authorities said.

About 20 businesses were broken into at the city?s Shingle Creek shopping center, Minnesota Department of Public Safety Commissioner John Harrington said at a news conference.

The trial of Derek Chauvin, the former Minneapolis officer charged in Floyd?s death, continued Monday. Floyd, a Black man, died May 25 after Chauvin, who is white, pressed his knee against Floyd?s neck. Prosecutors say Floyd was pinned for 9 minutes, 29 seconds. The judge in that case refused Monday to sequester the jury after a defense attorney argued that the panel could be influenced by the prospect of what might happen as a result of their verdict.
___
Associated Press writers Scott Bauer in Madison, Wisconsin, and Jonathan Lemire in Washington contributed to this report.

___
Mohamed Ibrahim is a corps member for the Associated Press/Report for America Statehouse News Initiative. Report for America is a nonprofit national service program that places journalists in local newsrooms to report on undercovered issues.