Huntswoman Whips a Saboteur With Her Riding Crop During Fight 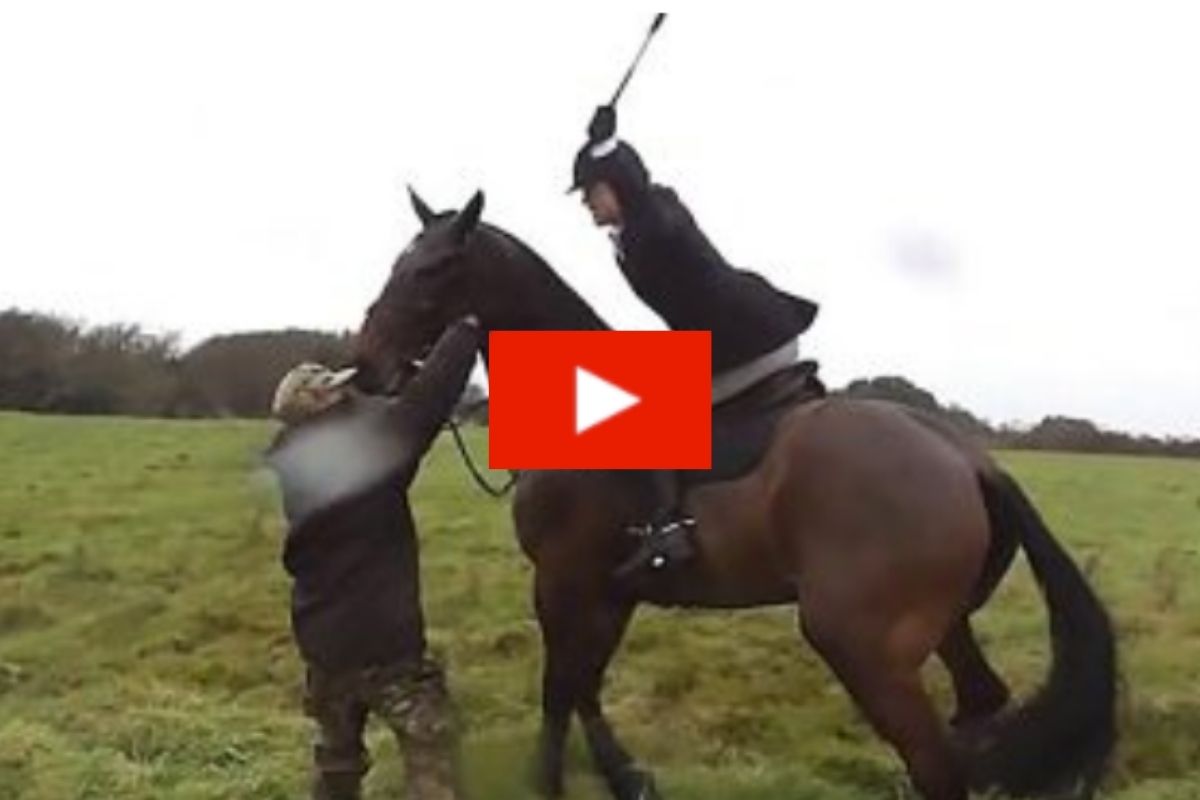 Before I get into more serious matters about this, I have to express how hilarious this initially looks to me. Here we have a video of a woman on a horse beating the absolute crap out of a dude with a whip, as the guy attempts to grab her horse’s reins. I really can’t stop chuckling at the fact that this guy obviously has a mission in sight, but the horse rider is just not having it. So what’s going on here?

Jane Goring, previously known as Jane Miller, a huntswoman with the East Sussex and Romney Marsh Hunt Club, was not letting anyone stop her hunt, especially the masked man in this video. Simon Medhurst and Shirley Makin, from the Brighton Hunt Saboteurs, were attempting to stop her in protesting the hunt, and as a result, got whipped by Goring’s riding crop about 17 times.

The Brighton Hunt Saboteurs are animal rights activists who “desire to prevent the suffering and death inflicted on wild animals by hunting and shooting.” Goring was apparently using her horse to charge down the protesters who were in her way. The equestrian starts by telling them to get back on the road, to which the man tries to grab her horse’s reins. Goring responds by whipping him, telling him to “get off the f*cking horse, don’t grab the f*cking horses.”

Watch the huntswoman whip hunt saboteurs with a riding crop below:

The video of Goring whipping saboteurs from the club was originally posted on the Brighton Hunt Saboteurs’ Facebook page, in response saying, “Don’t charge horses into people. You cannot ride people down,” also explaining that, “they were there to make sure no illegal hunting took place and claim they are victims of an unprovoked attack.”

According to Sussex Police, a third party reported the assault, but the man did not need to receive medical treatment. Nevertheless, things went south a couple years later.

Goring, who was facing a private prosecution for the ugly clash, was crushed to death when her horse fell on top of her during a later drag hunt. According to Constable Robert Lawrence of the Surrey Police, the death was ruled as a riding accident since her horse got caught in barbed wire and proceeded to fall backwards on top of her.

Goring fell back, suffering massive trauma to the back of her head and blunt chest trauma from the horse falling on top of her. Because of the previous altercation, her poor husband Richard Goring suffered some hate mail, saying that her death was “karma.”

The verdict of the accidental death by the coroner read, “I do find that on 6 November, 2018, Jane Miller died in a field adjacent to Leigh road, Leigh, Surrey, of injuries sustained by a horse she was riding as it reared and fell upon her causing her injuries. I formally record her death as one of accident. To conclude I would like to give Mr Goring and all those touched by Jane?s life my sincerest condolences.”

Editor’s note: This article was originally published on November 20, 2017.