After her phone interview, Taylor Byrnes was excited about her job prospects with Canadian food services company SkipTheDishes. But she never got the opportunity to have an in-person interview because it was cancelled when she asked, via email, these apparently out-of-bounds questions:

They seem like logical questions for a job seeker, but they apparently weren’t to Victoria Karras, the company’s talent acquisition coordinator Byrnes emailed. Karras wrote back, “Your questions reveal that your priorities are not in sync with those of SkipTheDishes. At this time we will not be following through with our meeting this Thursday.”

Applied for a job at @SkipTheDishes. They cancelled my interview b/c I asked about wages/benefits @CBC @CBCNews @ctvwinnipeg #boycottSkip pic.twitter.com/CjBdnFvY1P

A while later, Karras wrote back to Byrnes to expound on her earlier statement, saying:

“As a startup company, we seek out those who go out of their way to seek out challenges and new opportunities. We believe in hard work and perseverance in pursuit of company goals as opposed to focusing on compensation. Our corporate culture may be unique in this way, but it is paramount that staff display intrinsic motivation and are proven self-starters. For these reasons, questions about compensation and benefits at such an early stage is a concern related to organizational fit.”

RELATED: College student horribly embarrassed after way she got turned down for job

Byrnes couldn’t believe the reply and decided to take it to social media. Her tweet went viral, and she found support from an overwhelming number of people, some of whom threatened to boycott SkipTheDishes.

“Questions about compensation and benefits should be answered before people have to ask. People aren’t looking for work because they have a vision of @SkipTheDishes creating world peace, they need to live,” SkipTheDishes co-founder Joshua Simair said in a statement.

He said he was disappointed in how the situation was handled, telling The Canadian Press, “We do share a compensation package prior to hiring. As soon as we became aware of it on Monday, we reached out to Taylor to apologize for the email and reschedule her interview. We’ve also addressed the email internally and will be providing additional training.”

RELATED: When he sat down for a job interview, he had no idea he’d become a hero

According to The Canadian Press, SkipTheDishes, an online food delivery company founded in Saskatoon and headquartered in Winnipeg, was sold to a company in the United Kingdom for $110 million in December. It operates in 20 Canadian and six U.S. cities. 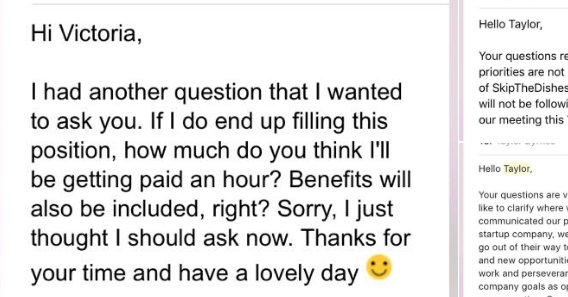