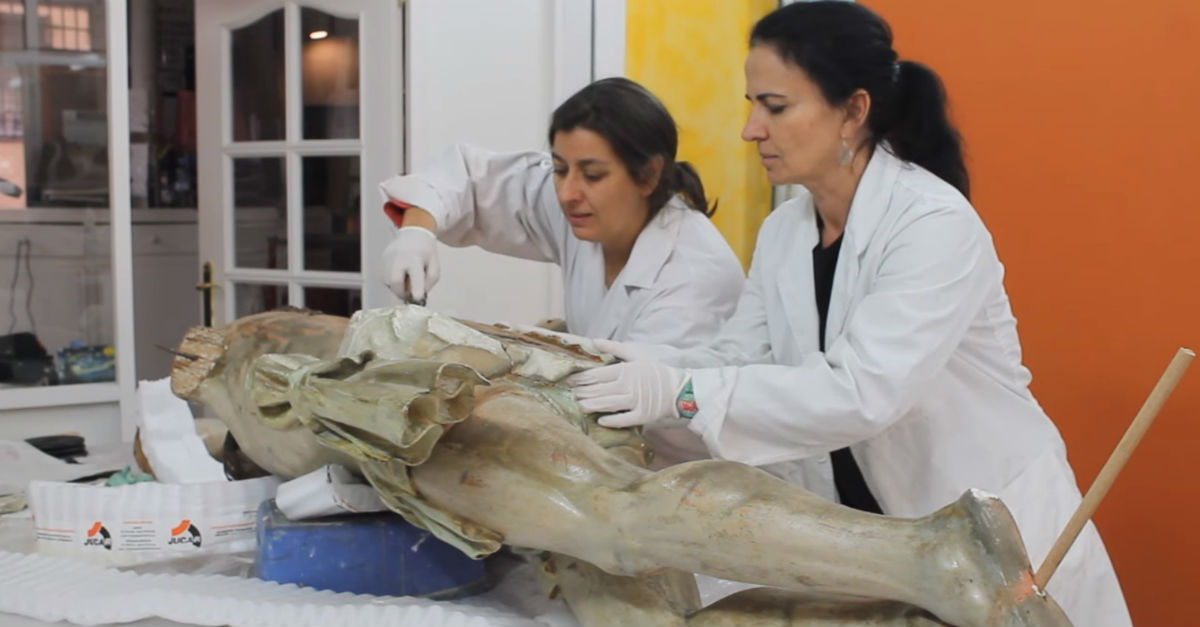 When a statue of Jesus Christ inside of a Spanish church was taken in for restoration, experts discovered that it served more than one purpose.

According to HuffPost, the statue, which is called the Cristo del Miserere, was displayed proudly at the church of Santa Águeda in Sotillo de la Ribera. Earlier this year, it was removed from the church for the purpose of restoration.

That’s when the team tasked with restoring the statue discovered a secret that’s at least 240 years old.

The hollow statue contained a compartment in the back, right where Jesus’ butt was. And that wasn’t the only thing they found.

The statue doubled as a time capsule as two sheets of paper containing writing on both sides were found inside of the compartment. The papers, which were authored by Joaquín Mínguez, a chaplain of the Cathedral of the Burgo de Osma, documented the name of the statue’s sculptor, Manuel Bal.

Bal was described as a “natural scholar of San Bernardo de Yagüe and neighbor in Campillo, both of this Bishopric of Osma.” According to the notes, Bal also sculpted five other statues for the church: Santa Águeda and saints Santiago, Millán, Jerónimo, and Juan.

Mínguez also documented the various aspects that defined life in 1777. The favored games at the time included cards and ball, typhoid and malaria were common ailments and the popular crops of the day included wheat, rye, barley and oats.

The papers are set to be sent to an archbishop, but a copy will be kept inside of the statue.

The hidden compartment certainly isn’t the strangest thing found inside of a religious statue.

Science Alert noted an 18th-century statue of Jesus Christ in Mexico was found to have actual human teeth in its mouth. At another point in time, researchers found the mummified body of a monk inside of a Chinese Buddha statue that was about 1,000 years old.

RELATED: Ohio students told not to sing the Lord’s Prayer at graduation had this bold response