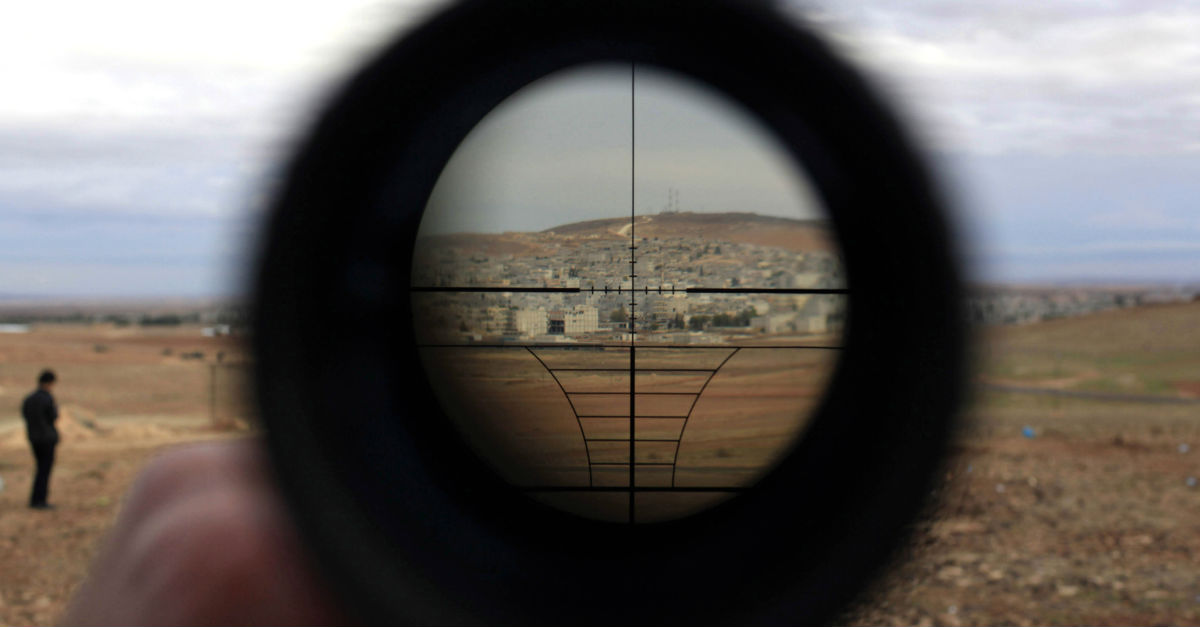 Gokhan Sahin/Getty Images
SANLIURFA, TURKEY - OCTOBER 19: (TURKEY OUT) A man watches the Syrian town of Kobani through a sniper rifle binocular from near the Mursitpinar border crossing, on the Turkish-Syrian border in the southeastern town of Suruc, October 19, 2014 in Sanliurfa, Turkey. Kurdish fighters in Syrian city of Kobani have pushed back Islamic State militants in a number of locations as U.S. air strikes on ISIS positions continue in and around the city. In the past month more than 200,000 people from Kobani have fled into Turkey. (Photo by Gokhan Sahin/Getty Images)

A Canadian sniper broke records when he took out an ISIS fighter in Iraq from over two miles, 3,540 meters in total, away.

“The Canadian Special Operations Command can confirm that a member of Joint Task Force 2 successfully hit a target at 3,540 meters,” the group announced via The Globe and Mail. It reportedly took 10 seconds for the bullet to reach its target.

RELATED: It was a normal day on the lake until a screamin’ bald eagle intervened — and it was all caught on slow-motion video

“Instead of dropping a bomb that could potentially kill civilians in the area, it is a very precise application of force, and because it was so far way, the bad guys didn’t have a clue what was happening,” they added.

According to Newsweek, British sniper Craig Harrison previously held the record for the longest confirmed kills when he shot a target in Afghanistan at 2,475 meters in 2009.

Three spots of the top five longest confirmed kills are held by British snipers, including an unnamed British military sniper.