Menu
Follow us
Search
Menu
Search
In this image taken from video police officers gather around a car adjacent to Houses of Parliament in London, Wednesday, March 23, 2017 after the House of Commons sitting was suspended as witnesses reported sounds like gunfire outside. The leader of Britain's House of Commons says a man has been shot by police at Parliament. David Liddington also said there were "reports of further violent incidents in the vicinity." (ITN via AP)

The first photo of the Parliament terror attack suspect has been taken. The man appears to be lying on a stretcher surrounded medical staff as he is wheeled into an ambulance after being shot by police.

PARLIAMENT ATTACK: This is thought to be the man who stabbed a police officer before being shot: https://t.co/tmIHrqc9yj pic.twitter.com/6TX6cQ2c9s

After a vehicle ran over pedestrians on London’s Westminster Bridge on Wednesday afternoon, the man pictured reportedly stabbed a police officer with a knife on the grounds outside of the British Parliament. He was then quickly overcome by security personnel, who shot him up to three times. The car rampage and knife attack killed at least four people, including a police officer and the attacker, and injured at least a dozen others.

Witness Rick Longley said he heard a bang and saw a car plow into pedestrians before coming to a stop.

“They were just laying there and then the whole crowd just surged around the corner by the gates just opposite Big Ben,” he said. “A guy came past my right shoulder with a big knife and just started plunging it into the policeman. I have never seen anything like that. I just can’t believe what I just saw.”

Authorities are treating the attacks as a terrorist incident, with London Police Commander B.J. Harrington confirming that a full counter-terrorism investigation was underway. Prime Minister Theresa May, who was in the Parliament at the time of the attack, was quickly removed from the area and is unharmed.

United States Secretary of State Rex Tillerson offered condolences on behalf of the U.S., saying, “The American people send their thoughts and prayers to the people of the United Kingdom. We condemn these horrific acts of violence, and whether they were carried out by troubled individuals or by terrorists, the victims know no difference.”

The latest on the attack at Britain’s Parliament. https://t.co/yRQOdBhous pic.twitter.com/VAp67RAg4g

RELATED: There has been an apparent terror incident in London outside the House of Parliament 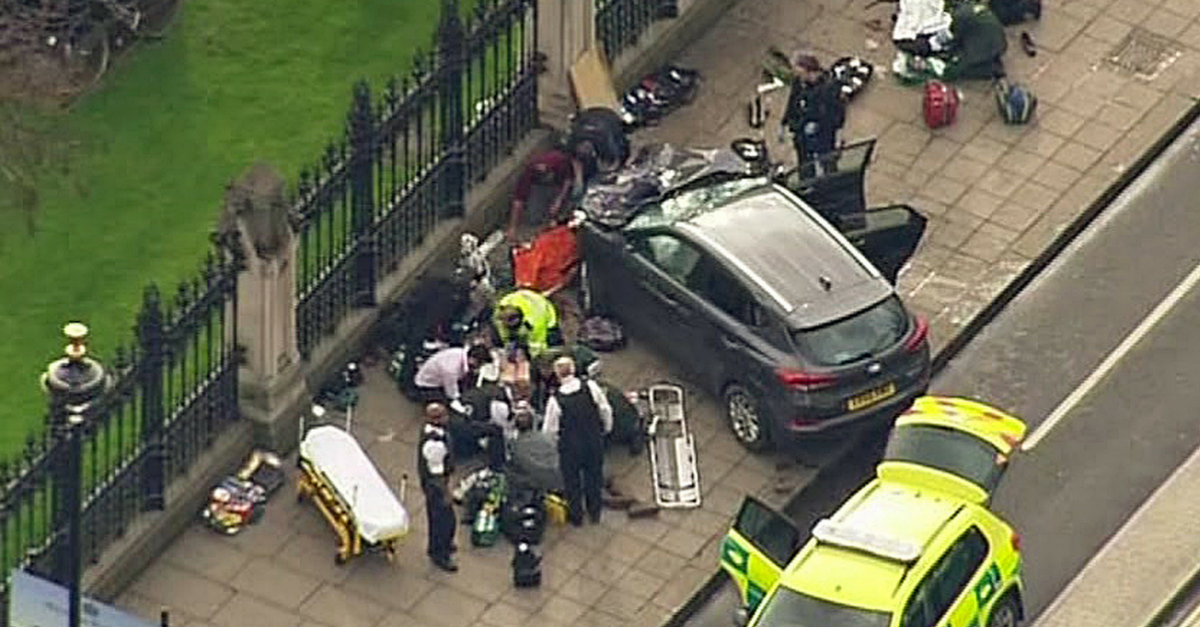