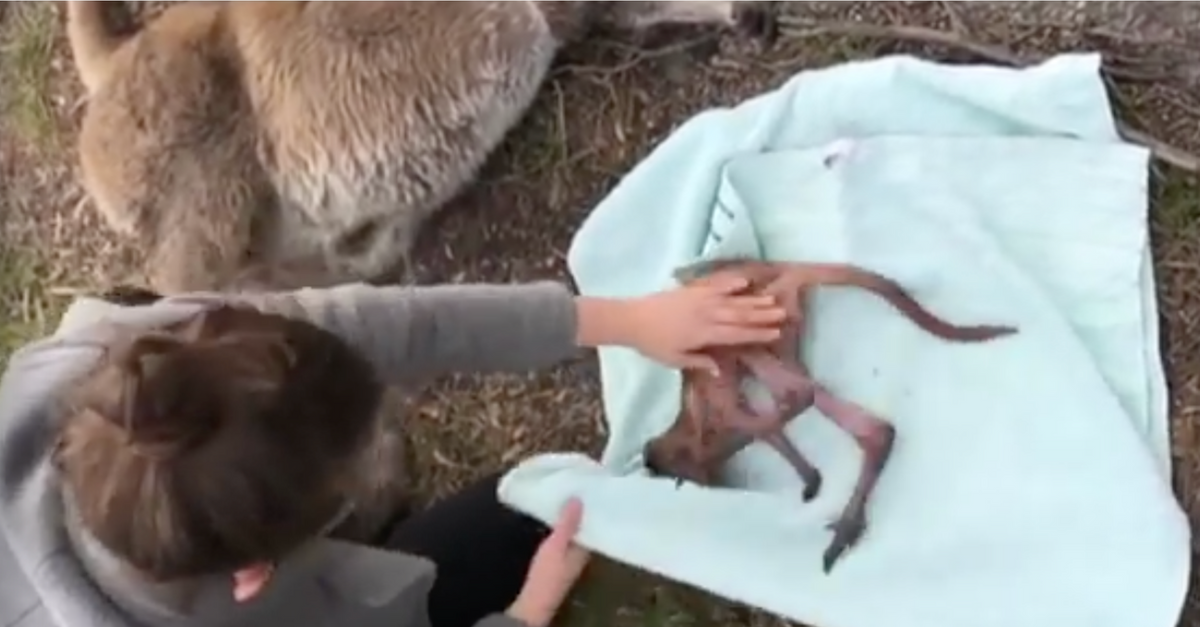 Two Australian women were driving home from lunch in Southern Australia when they noticed a kangaroo laying in the road. The kangaroo appeared to be moving so Lauren Wagner, from Adelaide, Australia, and her friend Sarah Wragge stopped their car and approached the animal to see if there was anything they could do to help it.

The women, however, after taking a closer look, quickly realized that the kangaroo was dead. The reason the dead mother was moving was that a baby kangaroo was still alive inside its mother’s pouch. The women pulled the dead kangaroo out of the road and, after grabbing a blanket, removed the baby kangaroo from its dead mother’s pouch. This video was found on Lauren Wagner’s Facebook page, something a little pleasantly graphic for social media.

Strangers to the Rescue!

Impressive work by these Australian women, who definitely didn’t have to do this. I’m no wildlife expert, but it’s my understanding that though kangaroos seem exotic to Americans (and the rest of the world) they’re actually more like deer than anything else in Australia. They’re everywhere and cool to see but also kind of annoying. And get hit by cars a lot. And get hit by cars a lot. It’s not uncommon to see a deceased mother kangaroo on the side of a road.

True story, I’ve eaten kangaroo. Yeah. They’re not exactly manatees or pandas. If there’s enough of them that you can eat their meat in a sausage, on a whole other continent, the animal probably isn’t all that special. (Also, flavor-wise, kangaroo was pretty whatever. I mostly ate it for the novelty of eating Australia’s national animal.)

Still, like most Americans probably would if they found a lost fawn, these Australian women decided this little joey deserved the chance to grow up and one day die at the hands of a car driving on the wrong side of the road too. Hats off to Lauren Wagner and her friend Sarah Wragge for contributing to Australian nature and not making a meal out it.

Who knows, maybe the tiny joey will one day be in your sausage too?

Editor’s note: This article was originally published on January 14, 2020.

Watch: Australians Take Out Trash in Style in Response to COVID-19