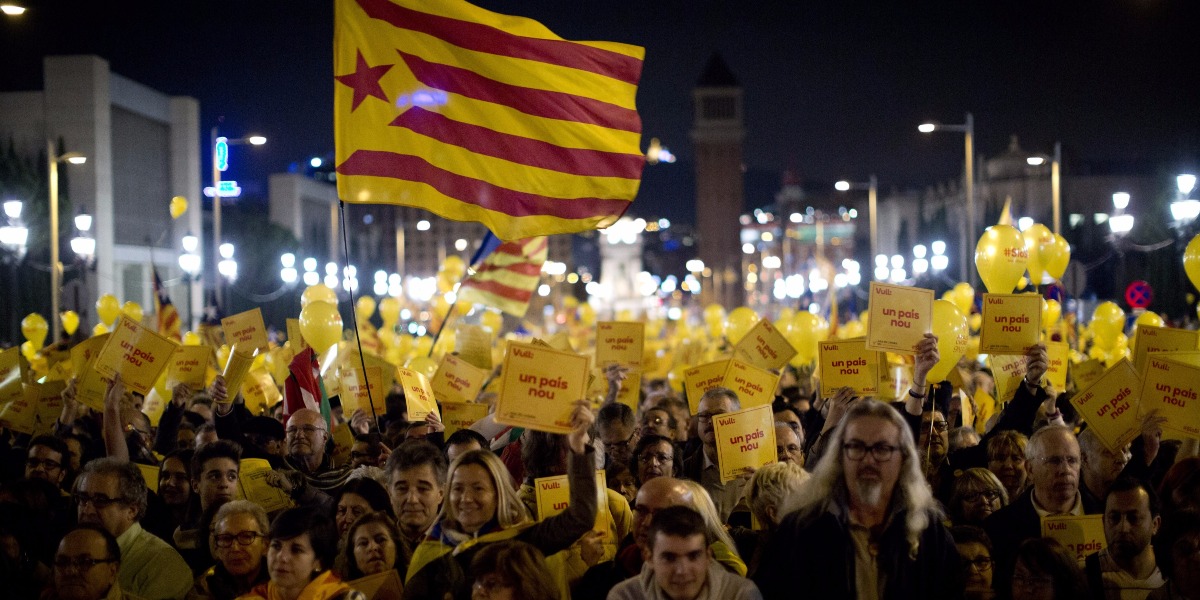 AP Photo/Emilio Morenatti
Pro independence supporters take part in a rally ahead of voting on an informal poll, scheduled for next Sunday, in Barcelona, Spain, on Friday Nov. 7, 2014. The pro-independence regional government of Catalonia stages a symbolic poll on secession in a show of determination and defiance after the Constitutional Court suspended its plans to hold an official independence referendum following a legal challenge by the Spanish government. (AP Photo/Emilio Morenatti)

In a move that may prove to be akin to throwing open the chute and expecting the bull to stand still, Catalan President Carles Puigdemont declared Catalonia’s independence from Spain Tuesday while proposing “to suspend the effect of the independence declaration.”

With this strange ambivalence Puigdemont, who heads the government of the semi-autonomous Spanish region, seems to be looking for a way out of the perilous space he currently occupies between the rock of the central government and the hard place of his own pro-secession supporters.

On one hand, he could have backed down from declaring independence, leading to accusations of betrayal by Catalan nationalists and full desertion of the radical secessionist CUP party from his governing coalition. His ability to manage the situation would evaporate, and the independence movement could easily turn violent.

Puigdemont’s other option, even more potentially disastrous, would have been a full and unequivocal declaration of Catalan independence, effective immediately. In that case, the government of Spanish Prime Minister Mariano Rajoy would have full authority to invoke Article 155 of the Spanish Constitution of 1978. The article states that if a semi-autonomous community within Spain “does not fulfill the obligations imposed upon it by the Constitution and other laws,” then the central government — pending approval by the Senate, of which Rajoy’s Popular Party enjoys majority control — will have the right to “compel the Community to meet said obligations.” This would likely mean the invasion of Catalonia, the forcible takeover of its government and the arrest of its leader, Puigdemont.

Puigdemont’s best hope of a peaceful way forward now lies with the European Union, which has so far treated Catalan independence as an “internal” Spanish issue. In fact, Puigdemont delayed his independence speech for nearly an hour while he spoke with at least one high-ranking EU official. At this point, we can only speculate what the EU official told Puigdemont or whether that exchange might have stopped him from delivering a very different speech.

Puigdemont’s plan calls for mediation from the EU while the Catalonian government refrains from taking any steps toward self-government and the Spanish government leaves them in peace. A similar delayed-action declaration of independence followed by international mediation proved effective for Slovenia in 1991, and is probably Catalonia’s best option at this point. The threat, however, has not yet fully dissipated, as one Spanish journalist has suggested that even a limited declaration of independence still gives Rajoy legal grounds to invoke Article 155 if he chooses.

As Matt Purple of Rare has pointed out, early polling suggested that the Catalan referendum held on October 1 may well have rejected independence, causing the secession movement to fizzle out. Instead, Rajoy opted to suppress the vote by force, sending jackbooted thugs into the streets, where they injured over 700 people. They snatched ballot boxes. They beat old women with batons and pelted would-be voters with rubber bullets. The videos spread. When the tear gas finally cleared, the Catalan independence movement found itself solidly entrenched on the moral high ground, despite the dubious results of the referendum, which most anti-independence Catalans boycotted.

RARE POV: This is why disarming citizens can be dangerous

The best way out of this mess would probably be a second, officially sanctioned independence referendum, but with the wounds of Rajoy’s crackdown still raw, I cannot imagine voters rejecting independence this time around. There is no going back. Regardless of what the Spanish Constitution says, the people of Catalonia have the right to “dissolve the political bands”— as the United States Constitution so eloquently put it — which bind them to Madrid.

Long months of negotiations lie ahead, but it is entirely possible that the world could soon be welcoming its newest nation.