Menu
Follow us
Search
Menu
Search
Demonstrators with "estelada", or Catalonia independent flag, gather in protest in front of the Spanish police station in Barcelona, Spain, Tuesday, Oct. 3, 2017. Labor unions and grassroots pro-independence groups are urging workers to hold partial or full-day strikes and demonstrations throughout Catalonia to protest alleged brutality by police during a referendum on the region's secession from Spain that left hundreds of people injured. (AP Photo/Francisco Seco)

Two years ago, when I was studying abroad in the southern coastal city of Málaga, Spain, I was exposed to the rhetoric of the Catalan independence movement and asked my host mother, “¿Va a ser una guerra civil?” Is there going to be a civil war?

At the time, Carmen assured me that there would be no war, but two years later, Western Europe’s newest democracy stands on the brink.

The semi-autonomous region of Catalonia, located in northeastern Spain, defied the nation’s highest court by holding an independence referendum Sunday that was denounced by Spanish Prime Minister Mariano Rajoy as illegal and unconstitutional. In a move that one Spanish sociologist called a political calculation designed to divide his opponents, Rajoy ordered the vote to be suppressed by force.

RARE POV: You won’t believe the number of Californians who want to secede from the United States

Photos and videos of Spanish Civil Guards and National Police Corps officers using batons, tear gas, and rubber bullets to drive voters away from polling places and confiscate ballot boxes spread across internet. More than 700 people were injured, including 10 police officers, but pro-independence Catalans have still found little support from the European Union, of which Spain is a member.

Despite the central government’s crackdown, around 2.26 million votes were cast from a voting population of 5.3 million. Ninety percent of those ballots were cast in favor of independence, officials say, but it is difficult to estimate how well this number reflects the actual opinions of the Catalan people, since many anti-independence Catalan groups boycotted the vote, which they viewed as illegitimate. Polls taken earlier this year calculated support for independence at just over 40 percent, although an overwhelming majority favored an independence referendum.

Pro-independence groups staged a general strike Tuesday, which largely paralyzed the region and its capital city of Barcelona. Carles Puigdemont, who leads the regional government, has said that he views the referendum as binding and will present the results to the Catalan parliament in the next few days with a formal declaration of independence likely to follow.

After Sunday’s violence, the Catalan independence movement has the moral high ground, but if the central government refuses to back down and accept the international mediation the Catalan government has requested, there’s only one other way forward.

When Spain adopted its 1978 constitution, ending decades of dictatorial rule, each of the nation’s 17 regions—including Catalonia—negotiated independently with the central government and agreed to differing degrees of autonomy. They also agreed to “the indissoluble unity of the Spanish Nation” and to the use of Spain’s military—of which the pro-unity King Felipe VI is commander-in-chief—to “defend [Spain’s] territorial integrity and the constitutional order.”

Human Rights Watch, in their statement on the violence, acknowledged the Spanish government’s legal right to suppress the vote, merely asking that the government “protect the rights to peaceful assembly and free expression” and that police “ensure that their actions are necessary and proportionate.” Other commentators, however, have emphasized international law, arguing that banning the vote violated the Catalonians’ human right of self-determination, which no government has the right to deny.

If the central government exercises its constitutional powers and employs military force to take over the Catalan regional government, the violence we saw Sunday could be only the beginning.

Carmen and I have stayed in touch on Facebook, and she has recently shared several pictures with the Spanish flag, declaring her pride in both her national Spanish and regional Malagueña identities. “In a civil war, we will kill each other and the politicians will be in the Bahamas enjoying the money that it cost us so much to earn with many hours of work,” she posted Tuesday.

Such a situation seems unimaginable in the United States, but we have had a few abortive secession movements of our own with the Texit and Calexit movements of recent years, not to mention the American Civil War, which set the precedent on the issue of American secession. Responding to a 2013 “We the People” petition for Texan secession, a White House official echoed the Supreme Court’s 1869 Texas v. White decision, writing that America is a “perpetual union” that the Founding Fathers “did not provide a way to walk away from.”

America’s federal government, then, has the same legal rights as Spain’s to suppress any attempt at secession. Imagine National Guardsmen, shipped in from 49 other states, occupying schools, churches, and fire halls in Texas and California, brutally beating and gassing any who try to vote, while local and state police find themselves caught in the middle. It could happen here. 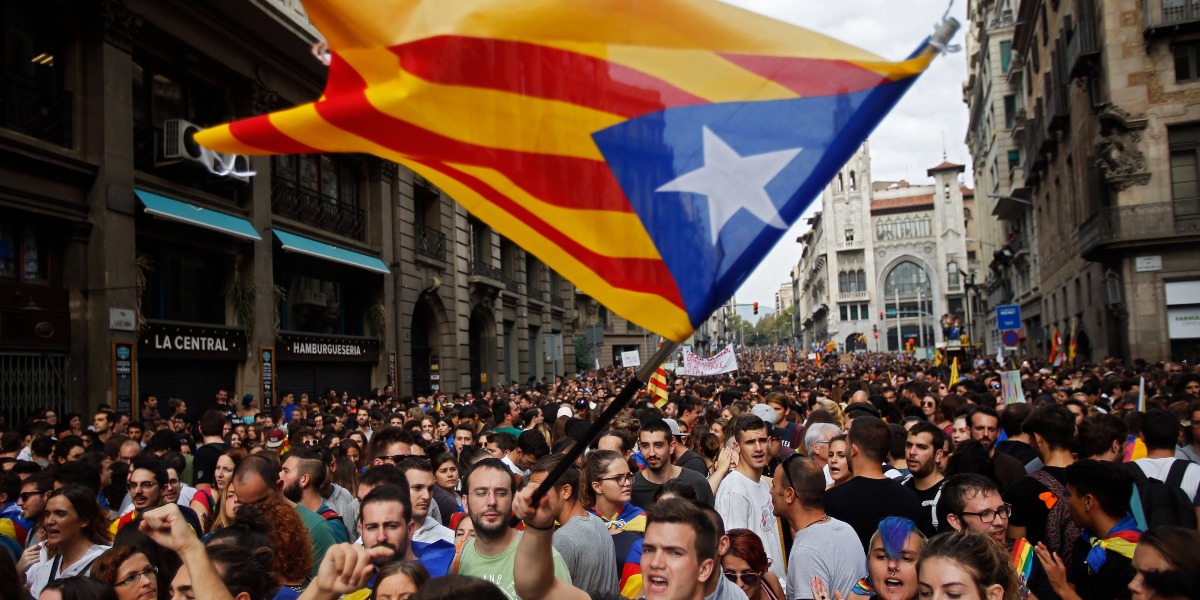