This Is The Most Googled Horror Movie Villain in Your State! 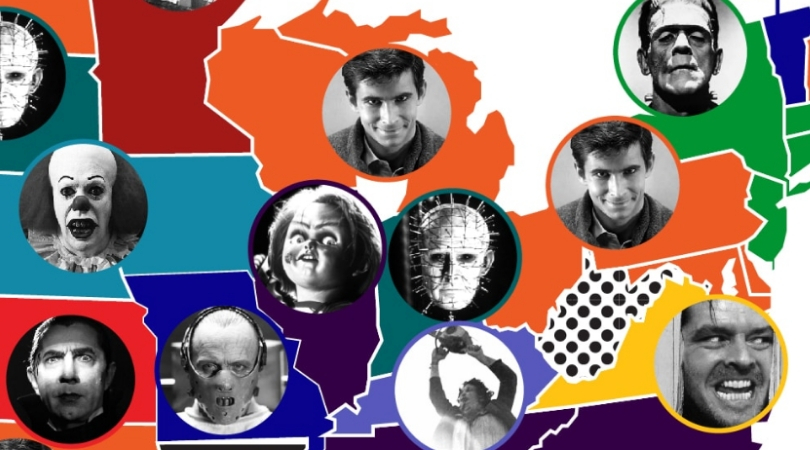 It?s the most wonderful time of the year?.well, at least for some it is! If you?re a huge horror movie junkie like myself, Halloween is the best month for TV shows and movies, because let?s face it, who doesn?t enjoy a good screamfest. Frontier Communications recently released a study that showed which villain is the most searched in each state, even after decades of their films being released. 15 popular villains were selected from classic, pre-2000 horror movies, and were tracked using Google Trends to analyze their search volume in the last 12 months.

Lucky villain #1 is no other the creepily psychotic Norman Bates. Bates is the most searched horror movie villain in the US and holds the heart of Midwestern audiences. That?s a pretty strong popularity stream for a villain who?s storyline is over 50 years old. Psycho was published in 1959, created by Robert Block, and was adapted into the iconic movie by Alfred Hitchcock in 1960. Many also became fans of Bates after the newly adapted version of Bates Motel from A&E in 2013, starring Freddie Highmore and Vera Farmiga.

Second most searched villain goes out to Chucky. Of course, Chucky is a popular favorite in Illinois, perhaps because Child?s Play was filmed in Chicago. The Brewster Building, at Pine Grove Avenue and Diversey Parkway, was the size of Karen and Andy?s apartment, which was pictured on the film?s poster. For a doll, safe to say Chucky has caused a lot of damage in 25 years, and in 6 movies. The notorious doll has killed at least 40 victims and has managed to survive five on-screen deaths! No wonder he’s feared in more than 10 states!

As for third place, surprisingly enough, it is Frankenstein?s Monster! The monster is a fictional character who first appeared in Mary Shelley’s 1818 novel Frankenstein, created by Victor Frankenstein in his laboratory. I was pretty surprised by this since the monster is purely fiction (and you can obviously tell), but, I guess it has to do with the ‘shock factor’ that the images of the deformed monster showed. I mean, back then it was easy to understand why people were scared of the 8-foot-tall monster, appearing in at least 74 adaptation on TV alone. But now? Who knows, right?

Count Dracula has been a villain since 1921 in at least 59 films and TV adaptations. Every year there are thousands of people over the world with costumes and accessories of Dracula or vampires, making it easy to see as to why some would be afraid of the Count. He has become an iconic symbol of Halloween.

Want to know which one was the highest in your state? Check out the full list here!

Editors Note: This article was originally published on October 22, 2018.