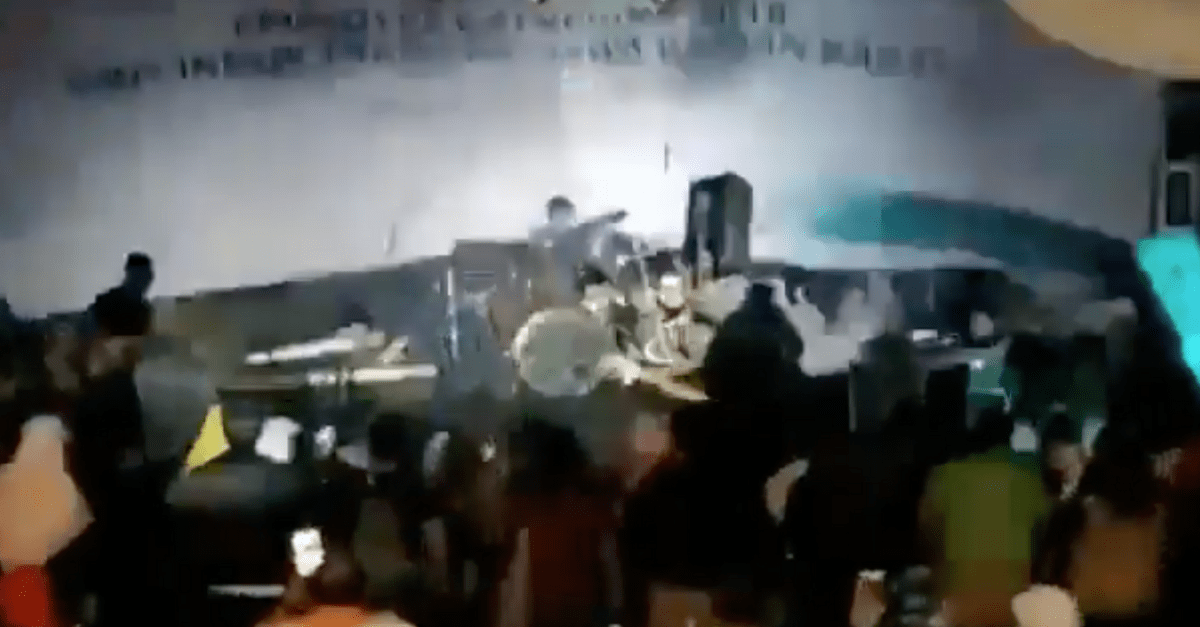 A video from BNO News shows the tsunami that was triggered by a volcano and killed 281 people in Indonesia slamming into an unsuspecting concert that was taking place during the swell. The tsunami happened late Saturday night when an eruption at Mount Anak Krakatau intensified and ultimately caused an underwater landslide, which then triggered the tsunami.

If you think a volcano starting a landslide that creates a tsunami sounds like some sort of Armageddon nightmare… you’d be right. That’s an almost literal perfect storm. The type of even that reminds you that you’re living on an actual force of nature and are hilariously, helplessly, and hopelessly at its mercy.

In the video, the Indonesian pop band Seventeen can be seen playing at an event at Tanjung Lesung beach in Pandeglang. It was being thrown for the country’s state utility company, PLN, as well as civil servants from the Youth and Sports Ministry. Family members of the employees were also there.

NEW: Video shows a tsunami crashing into a venue in Indonesia where the band Seventeen was performing https://t.co/4P9zDCRkKC pic.twitter.com/q9RYOaPTt8

Yeah, several tons of water is not what you want (literally) crashing your party. Were that me I’d have just chugged my drink, jumped on a table that I assume would turn into my raft in a few seconds, and hope God likes me.

According to authorities, the tsunami killed 164 people in the area of Pandeglang alone, and 281 people overall. Hundreds of homes and nine hotels were seriously destroyed by the ocean swell, which caught residents along the coast completely off guard. There are still 89 people unaccounted for, so the death toll from Saturday night’s tsunami may still rise before all is said and done.

Daylight reveals some of the devastation after the tsunami in western Indonesia https://t.co/4P9zDCRkKC pic.twitter.com/8N5YPwmLlU

So, yeah, just some more evidence that a tsunami is maybe one of the worst things you can get caught in.