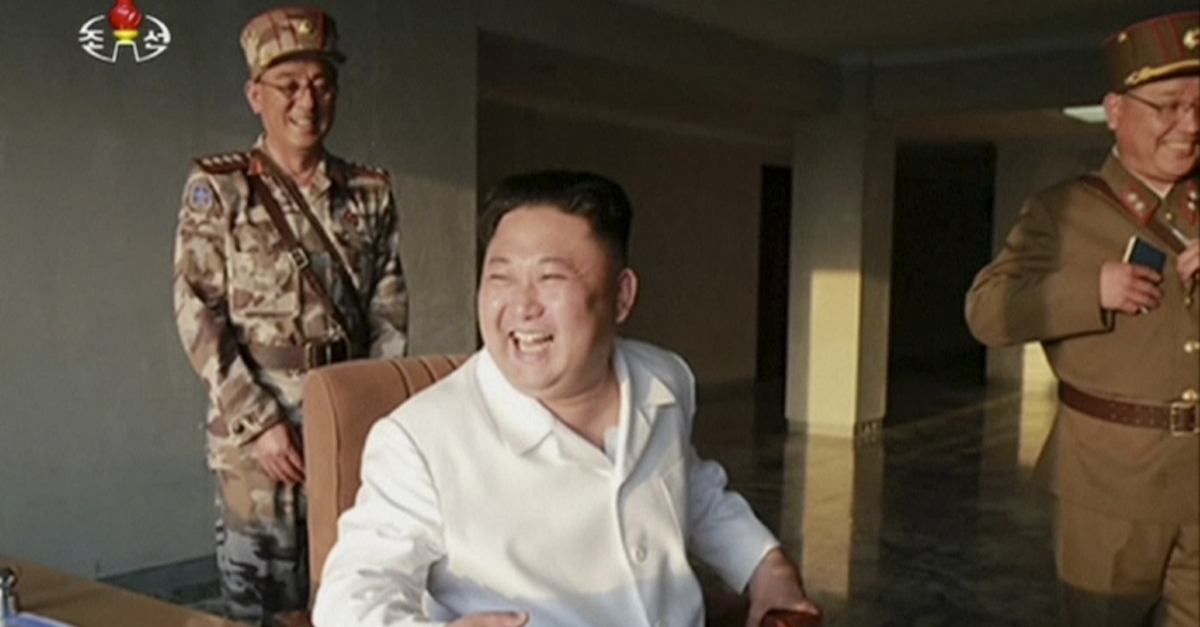 KRT via AP Video
This image made from video of an undated still image broadcasted in a news bulletin on Tuesday, May 30, 2017, by North Korea's KRT shows North Korean leader Kim Jong Un watches a missile launch. North Korean state television (KRT) aired on Tuesday video of Kim apparently giving field guidance at the test fire of a Scud-type ballistic missile, which reportedly took place the previous day. Independent journalists were not given access to cover the event depicted in this photo. (KRT via AP Video)

As tensions rise between the United States and North Korea, the latter nation has doubled down, claiming in a state-run media editorial that 3.5 million people have already volunteered to serve in the military and that the missiles are on “standby for launch.”

RELATED: Trump doubles down on North Korea rhetoric: “What I said is what I mean”

The editorial claimed that Kim Jong-un’s army is “capable of fighting any war the U.S. wants” and that the military is “on the standby to launch fire into its mainland, waiting for an order of final attack.”

It went on to say that the U.S. is undertaking a “tragicomedy of its own making” that could take the “American empire to meet its tragic doom.”

“[The U.S.] finds itself in an ever worsening dilemma, being thrown into the grip of extreme security unrest by the DPRK. This is tragicomedy of its own making,” the editorial continued. “If the Trump administration does not want the American empire to meet its tragic doom in its tenure, they had better talk and act properly.”

Reuters reported early Saturday that the state-run outlet, Korea Central News Agency (KCNA), said 3.5 million workers, party members and soldiers have already volunteered for the army and directly linked that to the war of words with the United States and the President Donald Trump’s warning of “fire and fury.”

Some U.S. intelligence officials questioned North Korea’s ability to reach the U.S. with their missiles intact.

Speaking to the Associated Press, Michael Elleman of the International Institute for Strategic Studies questioned that North Korea has the technology to pull it off right now, but he did say it’s only a matter of time until it can.

“I don’t think North Korea has a good measure of how accurate the missile is at this point. They don’t know if the re-entry technologies will really hold up — whether the bomb will survive the trip,” he said. “In principle, Kim Jong Un could hit the United States with a nuclear weapon. In practice, I think they are probably a half-year to a full year away from having something that will work more often than it would fail.”

“Putting these things all together and making them work is extremely challenging, and they haven’t yet demonstrated a capability to produce a reliable re-entry vehicle, which is what houses the actual nuclear device,” he said. “Remember, they’ve only tested these systems very few times.”