March 29 is a historic day: Britain officially begins its divorce from the European Union 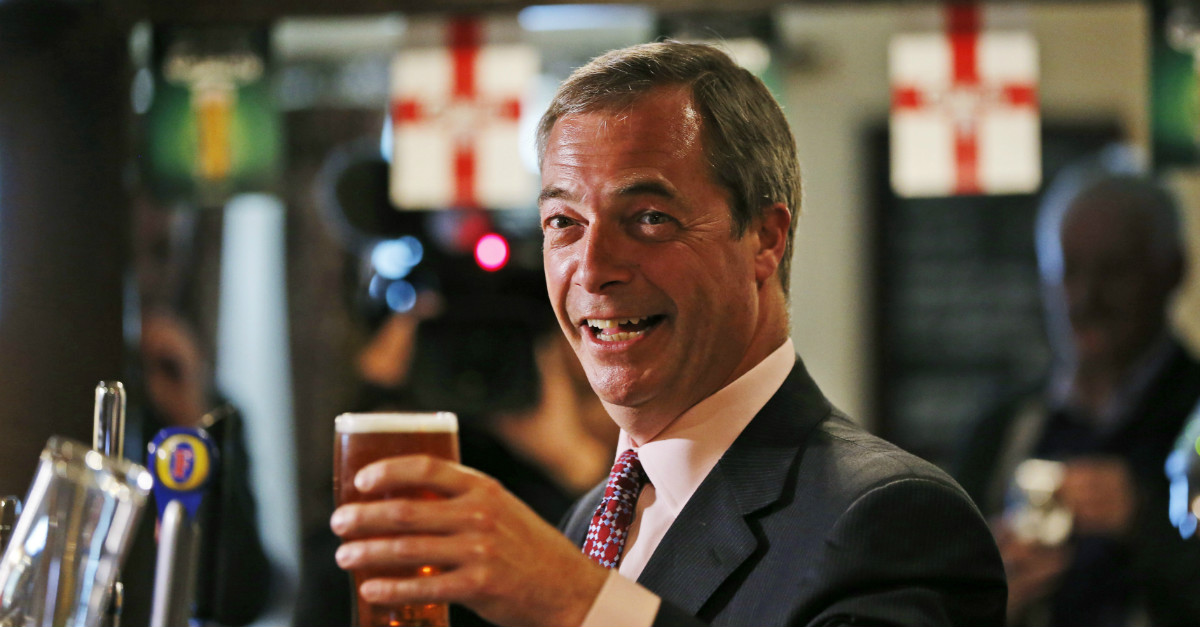 AP Photo/Lefteris Pitarakis
Nigel Farage, leader of Britain's United Kingdom Independence Party (UKIP) enjoys a pint of beer at a pub in South Benfleet, England, Friday, May 23, 2014. UKIP, Britain's anti-European party has made big gains in local elections, taking votes from both the governing Conservatives and main opposition Labour Party. It's a strong performance for the U.K. Independence Party, which advocates pulling Britain out of the EU and stopping the unfettered right to entry of European citizens. With about a third of results declared Friday from voting for 161 local authorities, UKIP had almost 100 seats, well over its predicted total of 80. Britons also voted Thursday in European Parliament elections. Those results will be announced Sunday along with tallies from 27 other EU countries. (AP Photo/Lefteris Pitarakis)

Today begins the tensest and most consequential stare-down of the 21st century. The British government has officially begun the Brexit process by triggering Article 50 of the Lisbon Treaty, which turns a portentous hourglass filled with two years worth of sand upside-down. British and European Union officials now have until March 2019 to haggle out a divorce agreement, after which, if nothing is finalized, Britain will be jettisoned from the EU and possibly subjected to steep tariffs as it finds its face pressed against the glass of Europe’s free-trade zone.

This is, to quote some guy who regrets not running for president, a BFD. If June 23, 2016, the day Britain voted to depart the EU, was Independence Day, as Nigel Farage put it, then this is the much more boring sequel that nonetheless has the potential to destroy the entire franchise. The stakes are high—the fate of the European Union, Britain’s economic competitiveness—and they are also wide—the future of the Anglo-American relationship, Scotland’s inclusion in the UK.

The most pressing concern for both sides is trade. Conventional wisdom is that London will pay a steeper price here than Brussels, since EU leaders insist there is no a la carte—if you want to retire from the parliament and the regulatory behemoth, you also have to leave the free-trade economic area, which accounts for more than half of British exports. That could mean serious pain for Britain. But wait. The linchpin of the European Union is Germany, which is dependent on British imports of their manufacturing goods. So both sides have an interest in avoiding the so-called “crashing out” scenario, under which they fail to strike a deal within two years and tariffs go flying up.

Good news comes from the World Trade Organization and an obscure bylaw known as “zero-for-zero.” This gives preference to free trade and allows nations to ink streamlined interim trade deals that temporarily even out tariffs on both sides. The UK is reportedly exploring the possibility of striking such an agreement to last for a decade following Brexit, keeping the economic pincers (mostly) at bay and giving both sides some frantically needed time. And if that’s the carrot, the British stick is the preliminary trade-deal talks they’ve begun with allies like the United States, New Zealand, and India, demonstrating that they have other avenues for commerce, some the EU itself has yet to open.

This is why the relationship between Donald Trump and Theresa May is so crucial: Britain needs America standing in its corner, a snarling and (in the age of Trump) Euroskeptic bear, to let Brussels know it won’t be cowed. This reality hasn’t gone unrecognized. European officials are increasingly cognizant that in the modern world, they can’t isolate Britain in a box, upping her drawbridges and pummeling her with punitive tariffs, which is why, according to Politico EU (far better than its American counterpart), “the EU has come to view Brexit as a ‘mission impossible’ — an existential threat with no upsides.”

Of course they have. The EU has always been chiefly a political project and losing one of the most powerful nations on their continent makes the term “European Union” itself a total misnomer. The challenge for Brussels is gargantuan: to maintain their economic vitality, irrevocably intertwined with the island to the northwest, while also ensuring that Britain doesn’t get off too easy, lest nationalists in other countries be emboldened.

RELATED: After Brexit, the media explodes with lies and authoritarianism

Still, Brussels does ultimately hold the whip hand here, and they seem to have staved off further Euroskeptic threat, at least for now. The defeat of anti-EU populist Norbert Hofer in Austria’s presidential election last December brought relief, as did this month’s electoral letdown for Geert Wilders, who pledged to eject the Dutch from the European Union. Nonetheless, the biggest poll on European unity won’t be held until next month: if Marine Le Pen wins the French presidential election—and do not count her out—it will shift the tectonics under Brussels almost as seismically as did Brexit.

So buckle up: much is at stake over the next two years as far as free nations go, and realistically, given that the parliaments of all 27 EU member states have to vote on the final agreement, it will probably be closer to a decade before Britain and the EU are totally annulled. Speaking of annulments, earlier this week the heavily pro-EU Scottish parliament voted to approve a second referendum on independence from the UK, creating another migraine for Theresa May and possibly endangering British union, too. Brexit means freedom for Britain, but no one ever said this was going to be easy.