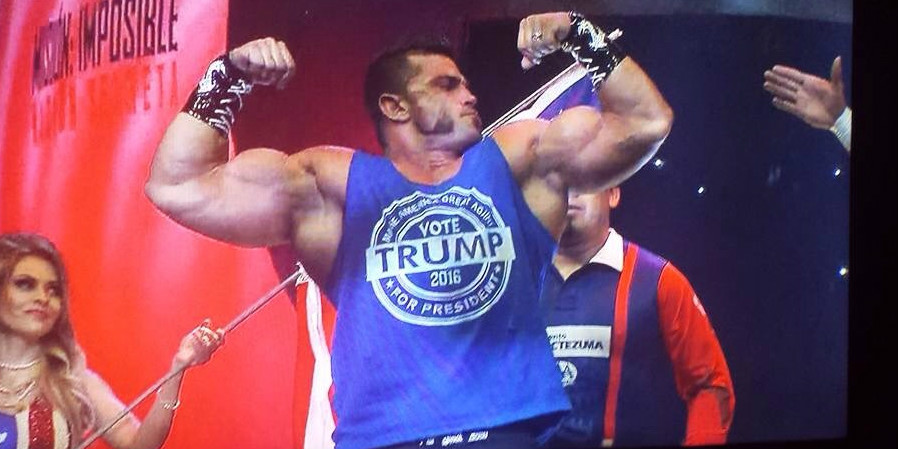 “I’m going to get a Donald Trump shirt.”

“It was kind of a joke, but the more I thought about it,” Cage said, “I thought this is going to be an awesome reaction.” “Later, I kind of got a little worried,” Cage admitted.

In June, after U.S. presidential candidate Donald Trump enraged many in Mexico by implying that Mexicans were “rapists” during remarks about immigration, the billionaire became an instant villain south of the American border.

“A buddy of mine that I work out with asked me if I had heard Donald Trump’s little speech and he gave me the rundown on it,” said Cage, “I said ‘dude that’s crazy.”

“Right away a lot of people were popping for it and I lost a lot of Twitter followers right away too because people took offense to it which I thought was great,” Cage said of the reaction in the arena that night and on social media, “I was pissing people off who aren’t even hearing this stuff.”

But does he really support Trump?

“Obviously, the first thing, whether I support him or not personally, I don’t think really matters,” Cage said.

On playing the bad guy in wrestling, he explained, “If I’m getting that much heat and people are talking about it and are pissed off, well then you are doing something right..”

“When you can have a real emotion whether it be positive or negative then that’s always an amazing accomplishment,” Cage observed.

“This is still wrestling at the end of the day.”