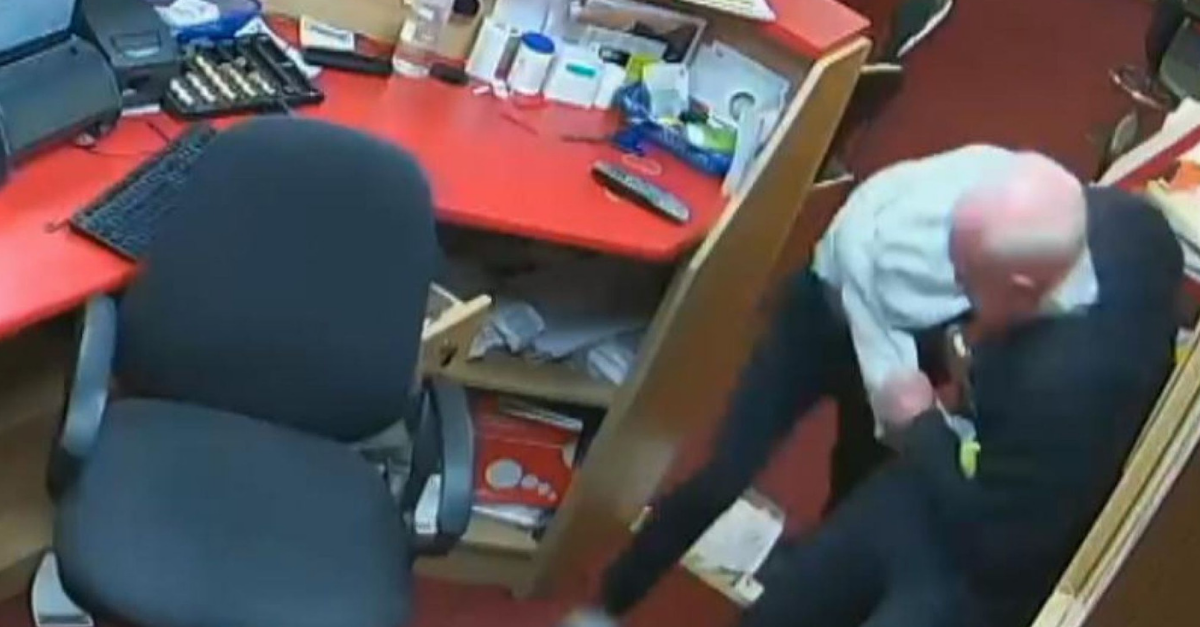 An 83-year-old Irish man was attacked by three armed robbers at Bar One Racing in Glanmire, County Cork, Ireland over the weekend and, like the stubborn old Irishman he probably is, the man made sure the robbers made off with nothing other than shame and a warrant out for their arrests.

The three robbers, armed with two hammers and a shotgun, burst into the bookie and bar and immediately started threatening retired 83-year-old customer Denis O’Connor and the bookie’s manager, Tim Murphy. While the man with the shotgun pointed his weapon in O’Connor’s face, the two men with hammers jumped behind the counter and began to attack Murphy. It was then that O’Connor decided to intervene, because, as O’Connor told Sky News, Murphy is a “nice young man.”

The balls on this old guy. He’s got two shotgun barrels inches away from his face and they don’t phase him at all. That robber didn’t realize that a guy who’s rolling the dice every night he goes to bed isn’t going to think too much of a gun in his face.

It’s also clear, thank God, that the robber with the shotgun never intended to use it. Maybe it was fake, maybe it wasn’t loaded, maybe the robber realized he didn’t want to make an evil decision, or maybe the guy just didn’t think life in jail was worth a couple hundred bucks. Whatever. At least no one got killed.

Hell, no one even got hurt! Except for the pride of the robbers, and also maybe the ass of the guy O’Connor kicked on the way out. The guys with the hammers weren’t too keen on using those either. Usually, it’s best to just let the morons have their small little loot and run, but this does go to show that most robbers don’t want any smoke. They want to get in and out as fast and painlessly as possible. Unfortunately for these blokes, they had Denis motherf*cking O’Connor to deal with.

This story was originally published September 18, 2019.