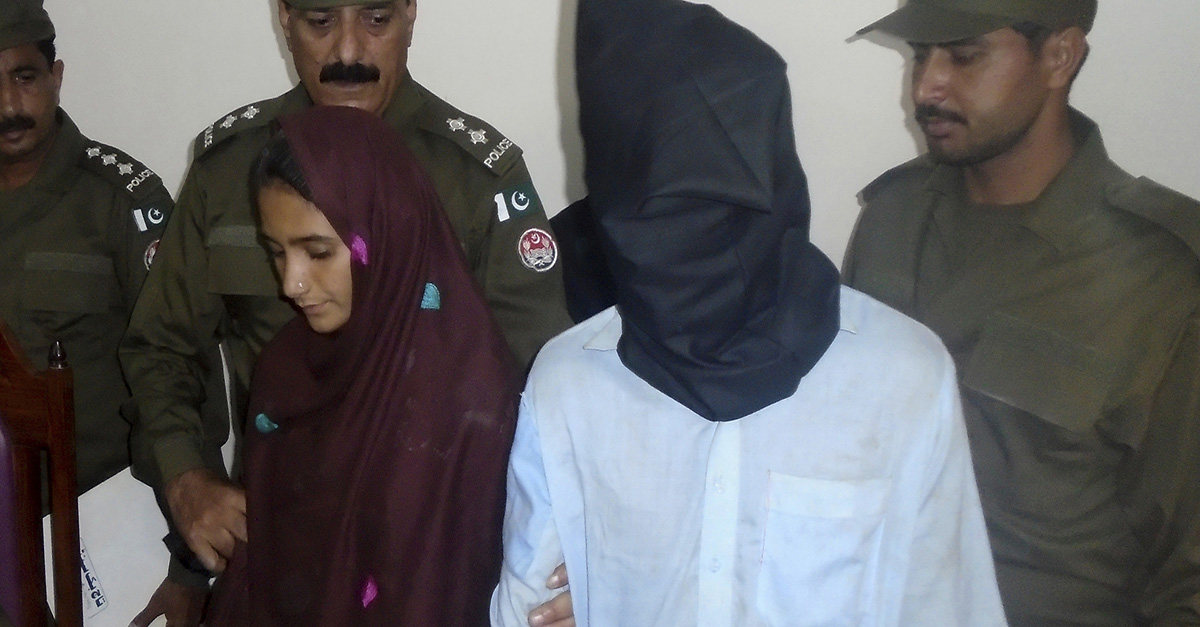 AP Photo/Iram Asim
In this Monday, Oct. 30, 2017 photo, 21-year-old Aasia Bibi and her boyfriend, Shahid Lashari, are presented to journalists, at police station in Muzaffargarh in Pakistan. Pakistani police arrested Bibi, a newly married woman, who was married against her will in September, on murder charges after she allegedly poisoned her husband's milk and it inadvertently killed 17 other people in a remote village. (AP Photo/Iram Asim)

A Pakistani woman is in custody after her desperate attempt at poisoning her new husband accidentally killed multiple members of his family instead.

According to the Daily Mail, Aasia Bibi, 21, had attempted to give her husband tainted milk, but he did not drink it. The milk was later turned into a traditional yogurt drink, lassi, that much of his extended family ingested. The deaths of at least 18 members — and counting — of the husband’s family have been connected to the food.

RELATED: Given the way she allegedly killed her husband of 30 years, it’s safe to say she’s a smoothie criminal

In a court appearance, Bibi said that she was forced into the arranged marriage while she was in love with another man, Shahid Lashari, AP reported.

“I repeatedly asked my parents not to marry me against my will as my religion, Islam, also allows me to choose the man of my choice for marriage but my parents rejected all of my pleas and they married me to a relative,” she said.

Bibi had previously attempted to escape her husband and return to her parents’ home and was desperate for a way out of the union. A senior police official confirmed that her lover and his aunt were also being investigated for murder for supplying the poisonous substance, BBC reported.

RELATED: She turned down a marriage proposal and wound up dead — the story behind the savage act is heartbreaking

According to police, the new bride claimed that a poisonous frog had fallen into the milk. Since the arrest, she expressed remorse over the casualties, saying that she was only targeting the husband, Daily Mail reported.

A district police officer also shared that they could only confirm the kind of poison after chemical tests on the victims.  As a result, Bibi, her lover and everyone arrested in connection are also being charged under anti-terror laws to deter others from attempting anything similar.