People Are Inserting Microchips Under Their Skin To Replace ID Cards 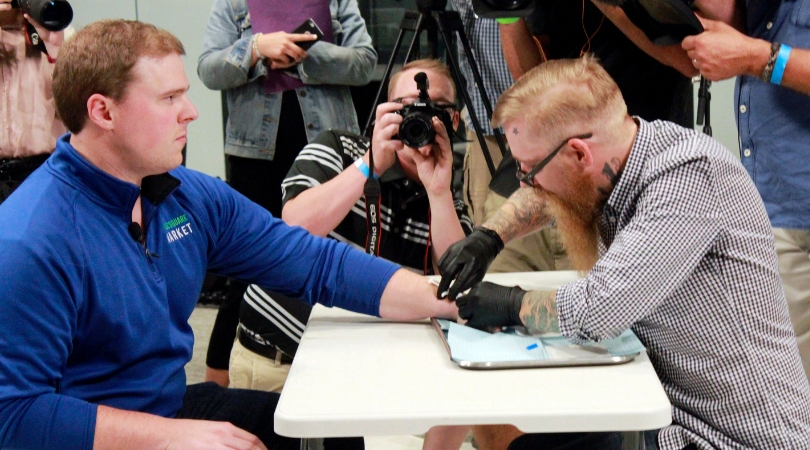 Just when we thought technology couldn’t get worse, Swedes have come up with the ‘genius’ idea of planting microchips into their bodies. Why? Because apparently ID’s are way to heavy, and they don’t feel like carrying them.

Around 3,000 people in Sweden have inserted the said microchips, which are the size of a grain of rice, and can work as key cards, and train tickets. According to the Agence France Presse, the technology was first introduced in the country in 2015.

The implants are said to have already replaced the need for a host of daily necessities. Usually, these microchip implants are placed in the hand, sometimes in between the thumb and the index finger, and can pretty much open any door you want it to. This includes something easy like your gym door or an office key card that you can use every day at work. All you have to do is simply wave your hand in front of a ‘special box’ that accepts the microchips, type in a code, and boom. Open.

Last year, the state-owned SJ rail line began to scan the hands of passengers with biometric chips, in order to collect train fare while on board. It’s so weird, but apparently, it worked. Now, will these tiny microchips soon be able to be used as a credit card? Well, maybe? But think about it, this is pretty terrifying.

Everybody who has seen any Sci-fi movie that involves any kind of microchip knows that they are tracked. It’s a given. I don’t know about you, but I don’t want someone to track my everyday move or know any of my personal details. I have enough with my FBI agent staring at me through my computer and phone 24/7. My location is my location.

So, why is it that Swedes are willingly getting these portable trackers? Well, some state that Sweden’s strong social welfare program is what has made Swedes trust the government enough to get a microchip. But, the trend isn’t only happening in Sweden. Germans have also jumped on the wagon, and one man event got an implant that includes his link to his last will and testament.

Here in the U.S., a company in Wisconsin announced it would give its employee the option of getting micro implants that can be used to log onto their computers, unlock doors, and purchase vending machine snacks. So, are implant parties slowly but surely becoming a social norm in the United States? Can it be that they are just way more convenient?

I sure hope not…I don’t want that in my body. Do you?