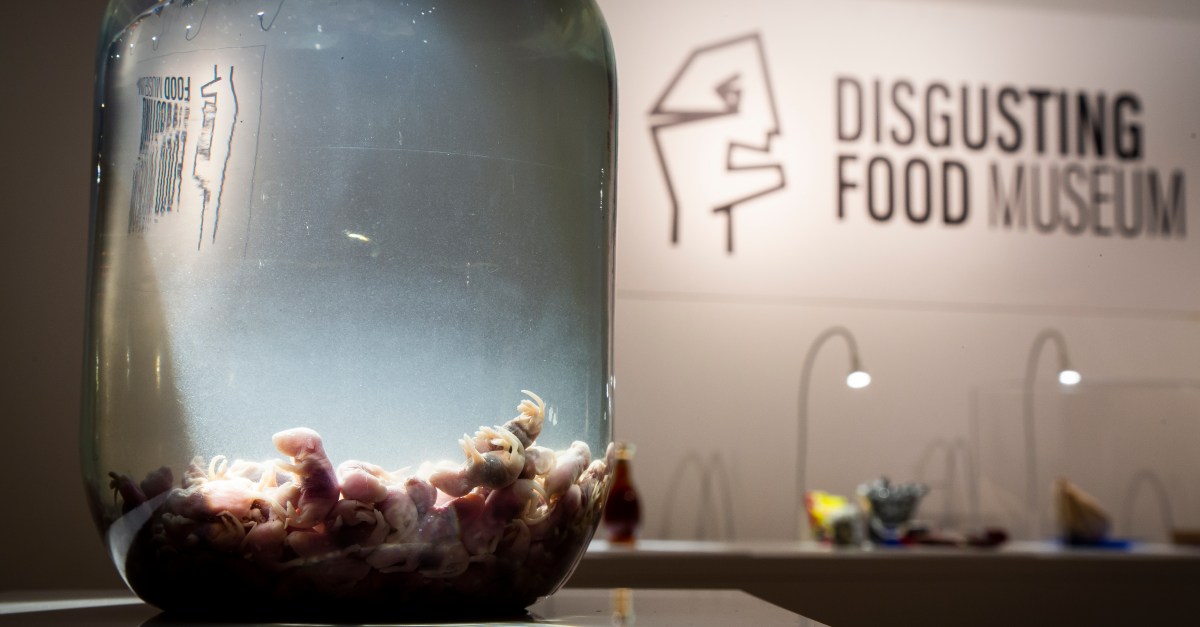 These are among the items considered palatable or even regarded as delicacies in some cultures that the Disgusting Food Museum in Malmo, Sweden is serving up.

The temporary museum, which opened Wednesday, clearly braced for revolted visitors to gag at the foods on display, most of which can be smelled or tasted. Tickets came in the form of vomit bags.

Curator Samuel West said the exhibition is meant to entertain, but also to convey a thought-provoking message: what is considered appetizing or repulsive is learned and can change. He hopes visitors will be encouraged to try more sustainable food products that are being developed or marketed, like insects and lab-grown meat.

“Disgust is one of the six fundamental human emotions, and the evolutionary function of disgust is to help us to avoid foods that might be dangerous, that are contaminated, toxic, gone off,” West said. “Disgust is hardwired as an emotion but what we find disgusting is culturally learned.”

The idea of exploring gross food came to him with awareness that the “single most impactful way we can impact the environment is by eating less meat,” he said.

“It’s an exhibition that asks visitors to challenge their notions of what is disgusting and what is delicious, and the aim is to get people to understand there is no objective measure of disgust,” West said. “For some, the revelation might be that ‘maybe insects aren’t as disgusting as I thought.'”

The 80 food items in the museum’s exhibit include a bull’s penis, frog smoothies from Peru, a wine made of baby mice that is consumed in China and Korea, and Sweden’s “surstromming,” an infamously putrid fermented herring.

Visitors are also introduced to “balut,” partially developed duck fetuses that are boiled inside the egg and eaten straight from the shell in the Philippines, as well as “casu marzu,” a Sardinian pecorino cheese infested by maggots.

Also included are items many Western visitors might not consider disgusting at all. Swedish visitors are surprised to find salty licorice, popular in Sweden but perceived as disgusting to many others.

American foods on display include Jell-O salad, made of gelatin and typically fruit; canned pork brains with milk gravy; and root beer, a sweet soft drink which Swedes say tastes like toothpaste.

“I think that by turning the lens onto ourselves, on Swedish or American food culture, we are saying, ‘We treat everyone the same,'” West said.

West said he has managed only to sample about half of the more exotic collected consumables. Asked if he ever vomited while preparing the exhibition, he said, “Every day.”

Some of the delicacies are so smelly they are kept in glass jars. At a museum preview last week, people took tentative sniffs of the displays before recoiling with grimaces.

“Real food in the museum setting can be a problem,” said Andreas Ahrens, museum director and curator. “You have to change things pretty regularly. You have to make sure that it doesn’t start to rot.”

Or as West put it: “You can’t leave bull testicles out for too long.”

West, a clinical psychologist and researcher from California, was also the creator of the Museum of Failure, a successful showcase of products that failed with consumers. It also opened in Sweden and will be shown soon in Shanghai.

Hakan Jonsson, a Lund University ethnology professor who helped with research for the exhibition, said notions of what people find delicious and disgusting are already changing.

“A lot of big groups in (the) Western world are all of a sudden thinking ‘Meat has become disgusting, something that I could never put into my mouth,'” he said. “And that is something quite new in the history here, where something considered as being normal, and prestigious, being the thing that you were aiming for Sunday, and all of a sudden that had become a matter of disgust for many people.”

The Disgusting Food Museum is scheduled to run until Jan. 27, 2019, at the Slagthuset MMX in Malmo.

Museum organizers said the museum shop offers a selection of “unusual” drinks and snacks and promise a restaurant operating in the building is “not disgusting.”

Watch: 10 of the Best Margaritas in Texas