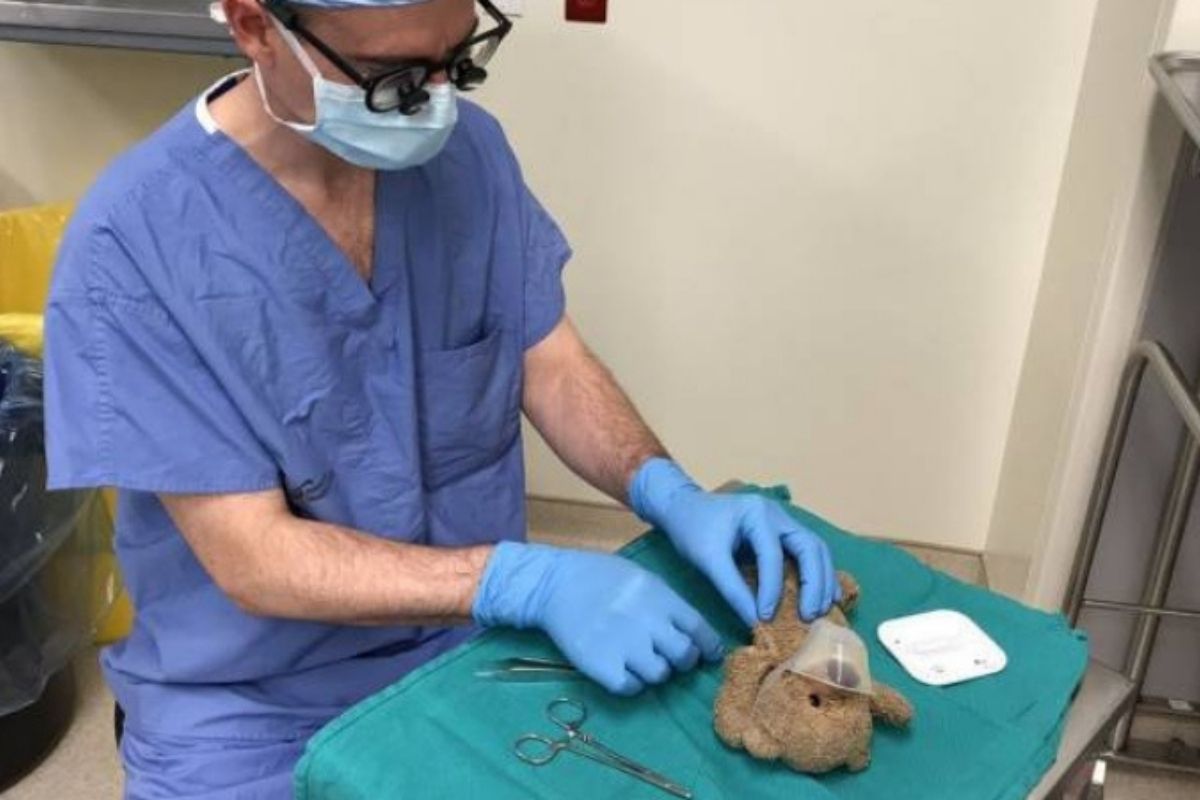 A pediatric neurosurgeon in Halifax was recently preparing a child for surgery when the child asked if the doctor would also fix a beloved teddy bear that needed some stitching. Dr. Daniel McNeely is now being praised on social media for his kind heart after he happily obliged his patient’s plea at the IWK Health Centre in Canada. McNeely decided to tweet out a picture of him stitching up the bear, which quickly went viral on Twitter.

The Canadian doctor wrote, “Patient asks if I can also fix teddy bear just before being put off to sleep … how could I say no?” The post was accompanied by two photos, the first showing McNeely ready for surgery with gloves and a mask on, working on a small brown teddy bear. The second photo shows the doctor with a scalp in one hand and a pair of scissors in the other over the teddy bear. The bear’s face was covered by a tiny mask, in which he said was a “neonatal face mask” that help to preserve the teddy bear’s anonymity.

Doctor to the Rescue!

Patient asks if I can also fix teddy bear just before being put off to sleep… how could I say no? pic.twitter.com/WOKFc5zr91

The post has been retweeted more than 6,000 times and liked by more than 14,000 users. Users were not only calling him a magnificent human pediatric neurosurgeon but an ursine pediatric orthopedic surgeon as well. McNeely is an associate professor, chief of pediatrics and director of residency training in the division of treasury at Dalhousie University.

It’s safe to say he shows what patient care really looks like and what going the extra mile means. His main goal is to always make his patient feel comfortable and safe during their recovery, by showing them they can trust him and his staff. The small gesture was only one example of how healthcare provides can care and comfort their patients in a non-medical way.

As for the owner of the teddy bear? McNeely stated he has looked for the 8-year -old, Jackson McKie since he was an infant. Which is why he couldn’t say no to when he asked him to fix his fluffy friend, right before surgery. The doctor asked the nursed to prepare a small table with some tools, using leftover stitches from Mckie’s procedure to patch up the bear, Little Baby. The boy and the teddy bear are now looking at a healthy speedy recovery. Warms my heart!

Editors Note: This article was originally published on October 2, 2018.