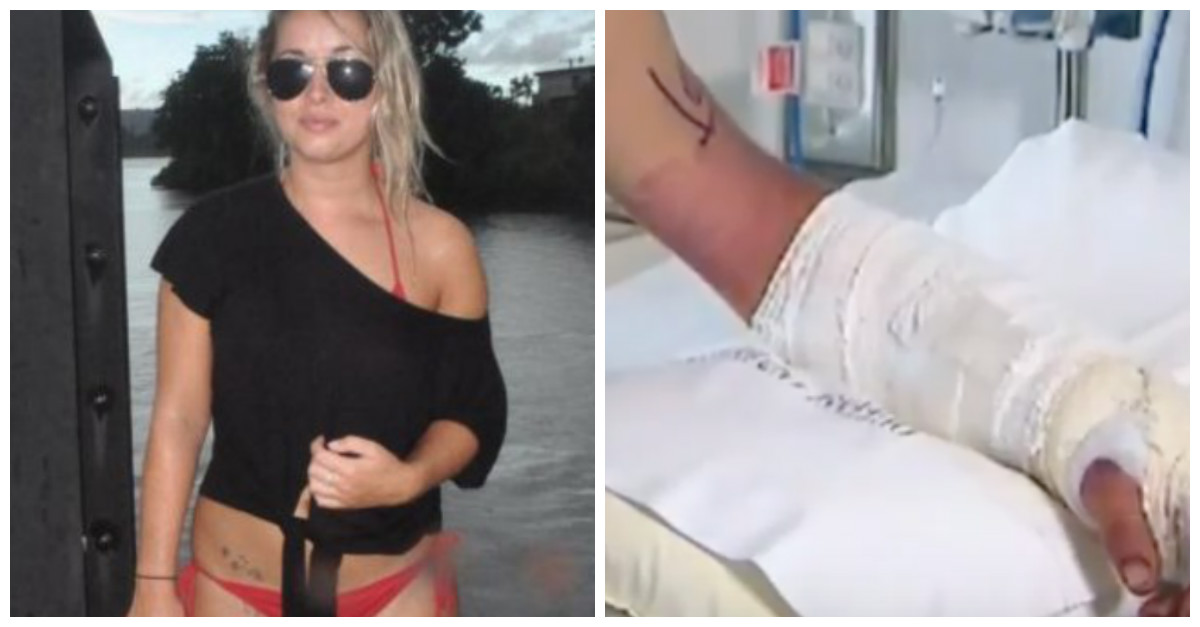 An 18-year-old Australian bloke who had the hots for a 24-year-old British backpacker made the critical error of accepting the dare of jumping into a river infested with aggressive saltwater crocodiles in Queensland, Australia.

He suffered extensive arm injuries as a result.

RELATED: Golfers were stunned when a huge alligator with a fish strutted down the street without a care in the world

Lee de Paauw is lucky to be alive and even luckier that the injuries he sustained to his left arm weren’t worse. A surgery on his arm was declared a success.

He explained from his hospital bed post-surgery that after having “about ten cups of goon,” basically boxed wine, he wanted to “prove a point” to Sophie Paterson.

“I started telling (her) about backpackers are more likely to get eaten by crocodiles than Australians so we decided to go down to the river and test the theory,” he said, according to The Courier Mail.

De Paauw said that as soon as he jumped into the river, the crocodile locked onto his arm, and that he responded by punching it in the snout and gouging its eye. De Paauw was “screaming and splashing the second he hit the water.”

But after the eye gouge, the croc released its prey.

For his part, de Paauw is optimistic and says that those calling him “one of the stupidest people around” are “haters” who are “gonna hate.”

He also says that he wants the croc to stay in the wild and live a happy croc life.

“I don’t want that crocodile harmed, I want it released back into the wild and I want it to have a happy life,” he said.

“I just wanted to show the backpacker,” he added. “I got her number and her name is Sophie.”

So what does Ms. Paterson have to say about this?

“He was talking about the local creek saying ‘I can swim out’ and so we said, ‘go on then’, but we didn’t think he would do it,” she said. “He sort of made this claim ‘I’ll swim out and back’, (and) at first we just said ‘don’t be so ridiculous’ and didn’t think he was going to go through with it,’’ she said.

“There was blood everywhere and he just wouldn’t stop screaming,’’ she added. “I thought he had lost his arm because of how bad it looked.”

RELATED: An enormous alligator was caught on camera taking a stroll through a Florida nature preserve

Apparently others also dared de Paauw to jump in the water but never thought he’d go through with it because of, you know, signs like this.

One thing we’ll say for de Paauw: he got Sophie’s number, and there’s no doubt she’ll ever forget him.