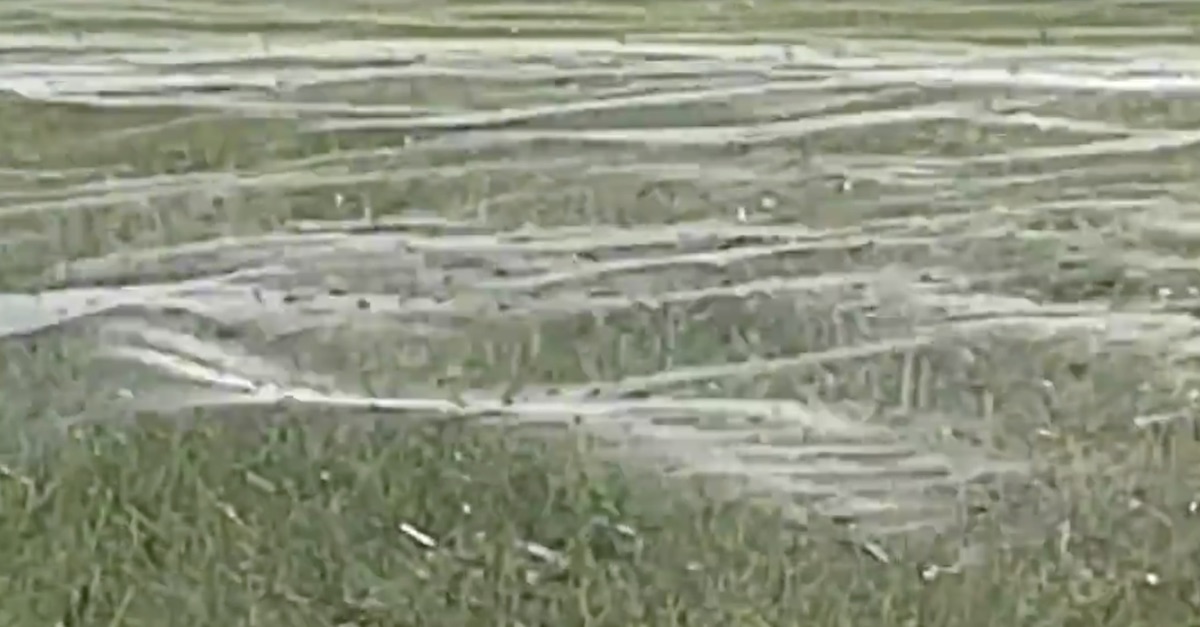 We’ve always wanted to go to New Zealand, but now that appears to be a no-go, as video has emerged showing thousands of spiders working together to escape floods by covering a soccer field with seemingly endless shimmering webs.

RELATED: When it comes to spiderwebs, we don’t think they can get any worse than this one

The video has really taken off on the internet, being viewed nearly 5 million times and shared more than 40,000 times in a day.

The video was filmed Sunday and it is believed that the numerous spiders were there as a result of Cyclone Cook, which flooded the soccer field.

A woman who witnessed the amazing and creepy phenomenon spoke with Storyful about what she saw. She said it was “kind of yuck, but really beautiful at the same time.”

“There was a bright glistening coming from the top of the mound, [and] it looked almost like the hill was sparkling, but we were unsure why,” Tracey Maris said. “So my 10-year-old daughter and I raced up to look and were shocked to learn it was all spider web. Kind of yuck, but really beautiful at the same time. I was amazed being up on top of the mound seeing how far it stretched for.”

Maris said she screamed when realized that thousands of little spiders had banded together to create the sticky conditions.

“I screamed pretty loudly at my discovery,” she said. “My stepson stood inside it and then had spiders crawling over him. The web was really sticky and clung to all of us.”

According to ABC News, this is what spiders do when flooding forces them to seek higher ground.

RELATED: A snake got caught in a dangerous redback spider’s web and got a taste of its own medicine during Aussie business hours

The comments made by people on the internet about this say it all.

“Well, I guess I won’t ever be going to New Zealand, now,” one woman said.

“Well, they should’ve went swimming because now they’re about to become BBQ, if it were up to me.
#wherestheflamethrower,” chimed in a third commenter.

We’ve seen spiders do this kind of thing before, and it’s pretty remarkable.

Even the spiders know when to get to higher ground