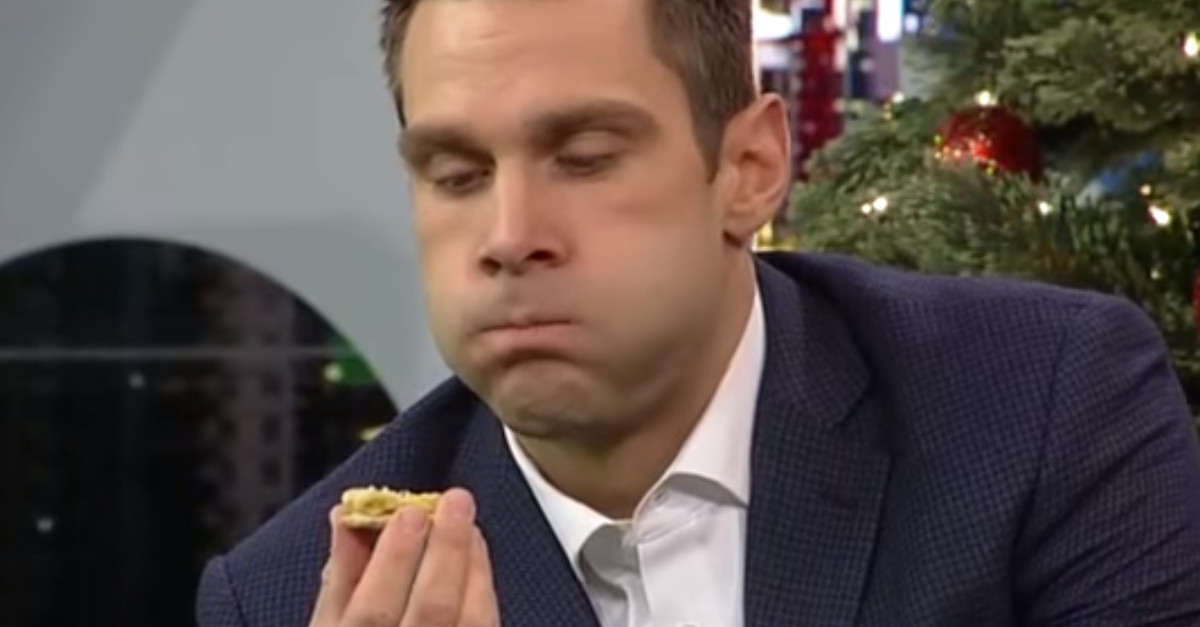 Unfortunatly, that advice was not heeded by reporter Leslie Horton on the Canadian program “Global News Calgary.” Horton brought her holiday artichoke dip on set during a live segment, and although she knew the dish had gone off badly, she still made the show’s other news anchors sample the rotten snack. Because well, we all love a good prank.

Meteorologist Jordan Witzel was the first to try the dip after Horton placed it onto a cracker. After inspecting it for a little bit, Witzel put the entire thing into his mouth and you could see he instantly began to regret it. This poor dude. What’s better is that his reaction was caught on national television, trending with how hilarious it was because Global Calgary tweeted the video.

“But there’s no vinegar in there!” Horton retorted. At that point, Witzel basically gagged, reached for a towel on the floor in front of him, and proceeded to spit out the dip. While Fee did not taste the concoction, co-anchor Amber Schinkel did and basically tried to hide the sheer displeasure of the experience, but finally cracked.

“It burns,” she said. “It’s artichoke dip, but something went terribly wrong,” Horton said. And then, finally, the truth for the rancid artichoke was revealed. Horton used pickled artichokes. As a viewer tweeted to Horton, “just regular canned artichokes are ideal for that dip!”

Horton tweeted (@global_leslie), “Apparently the key is NOT use pickled artichokes!!”

Apparently the key is to NOT use pickled artichokes!! @MoonLghtwrkrs

Apparently. No offense, but I would think that offering up a “holiday recipe” would mean you already knew that. But I don’t want to judge when I’m not exactly a master chef either.

Editor’s note: This article was originally published on December 17, 2019.