Menu
Follow us
Search
Menu
Search
PVV party leader and firebrand anti-Islam lawmaker Geert Wilders casts his ballot for Dutch general elections in The Hague, Netherlands, Wednesday, March 15, 2017. Amid unprecedented international attention, the Dutch go to the polls Wednesday in a parliamentary election that is seen as a bellwether for the future of populism in a year of crucial votes in Europe. (AP Photo/Peter Dejong)

I’m old enough to remember when Geert Wilders was a folk hero on the American right.

Wilders, a Dutch filmmaker with a capping of bleached-white hair—think Milo evolved into his next Pokemon form—released a movie in 2008 titled “Fitna” that was deeply critical of Islam. This ushered him into that valiant echelon of those who had risked their lives to criticize Koranic teachings, along with Salman Rushdie, Ayaan Hirsi Ali, and Theo Van Gogh. The death threats came rapidly, as did the embraces from American conservatives.

Today, Wilders is known less for his directorial skills than for being the head of the Dutch Party for Freedom (PVV), which has thrown The Netherlands’ typically sleepy politics into a stemwinder. He’s a vehement critic of the Dutch political class, an enduring detractor of the Koran who declares that he hates Islam, an enforcer of border laws who wants to halt all Muslim immigration and pay migrants to return to their home countries, an avowed defender of Israel, an economic liberalizer who iconizes Margaret Thatcher, and a critic of the European Union who promises a referendum on EU membership if elected prime minister.

It’s that last one that’s drawn the eyes of jittery Europeans to the Netherlands today, as Dutch voters head to the polls. And while it’s highly unlikely that Wilders will become prime minister—the PVV is still too small for that and recent polls have found them falling to third and even fifth place—the threat he poses to regular order is unshakeable. This is an election literally between the establishment and the insurgents, with the former represented by a center-right/center-left coalition between the Dutch Liberals and Labor, headed by Liberal Prime Minister Mark Rutte. It’s exactly the sort of what’s-the-difference-between-them-really concentrations of duopolist power that populists have taken Ross Perot-esque delight in tweaking. Think the polls will keep the Dutch political class safe? How’d that turn out in Britain? In America?

The salient political development here, as during Brexit, has been the obliteration of the Dutch center-left, which hitched up with Rutte for a program of tax hikes and spending cuts mandated by the European Union to tame the Dutch deficit and infuriated the traditionally Labor working class. Wilders might be a Thatcherite, but he’s shrewd enough to know his audience, which is why his party is calling for an end to so-called austerity, lower rents, a pension for everyone over the age of 65, and jettisoning the EU with its onerous budget requirements. This has captured the hearts of lower-income voters, which are parting ways with Labor, some for the further-left Socialist Party, some for the PVV.

Wilders’ anti-immigrant rhetoric resonates with them; less so, as you might imagine, among the Netherlands’ substantial population of Moroccans, once welcomed by the tolerant Dutch, now portrayed as this year’s great political villain. It’s the good and hardscrabble Dutch versus the uncivilized and job-pilfering immigrants, at least in the calculus of Wilders who has referred to Moroccans as “scum.” “In fact, he’s for ethnic cleansing,” one Dutch Moroccan worriedly told Politico. “Not just of Moroccans but of all people who are not ethnic Dutch.”

Even if Wilders picks up a substantial number of seats, he’s unlikely to become prime minister in the Netherlands’ present messy 14-party political tangle, and even if he somehow squeaks his way into a premiership, he’s even more unlikely to shake off the European Union. Current Dutch statutes don’t allow for a referendum on EU membership, which would require Wilders to steer a new referendum law through the House of Representatives, a tricky endeavor. The Dutch are a commercial people with strong merchant roots; expect them to look warily on any effort to spurn the trade benefits associated with the EU.

Nonetheless, all assumptions should fly out the window during this season of populist fever. I hate to divert your attention from Rachel Maddow’s plexiglas-shattering exclusive that Donald Trump paid taxes 12 years ago, but the Dutch election really is worth watching. If Wilders picks up more seats than expected, those same exhausted and bloodshot European eyes will turn to France where Marine Le Pen waves a tricolored flag and next month’s presidential election really could change everything. 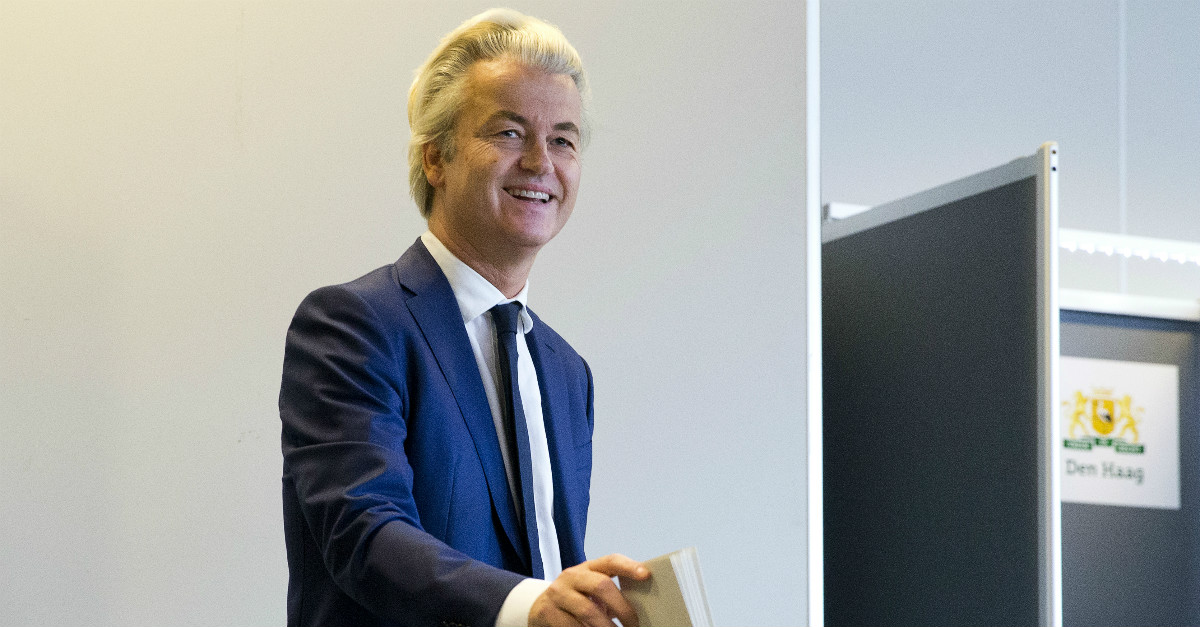