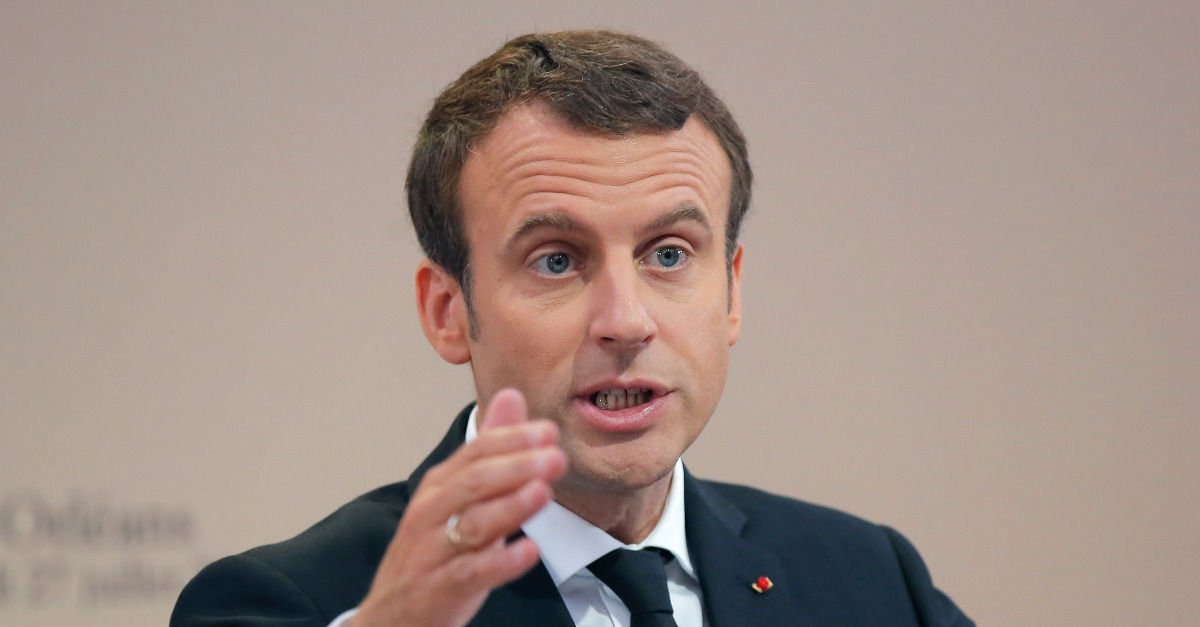 Sixty-two percent. That’s the portion of French people dissatisfied with the first 100 days of their new president Emmanuel Macron, according to a poll released last Wednesday. Even 11 percent of those who sympathize with Macron’s party “La République En Marche” say they’re dissatisfied with Macron himself.

The young and fresh-faced candidate who ran as a political outsider has been replaced by an unpopular president, ridden with scandals and unable to maneuver. Go figure.

Follow the American press and you never would have known about this, as it doesn’t fit the pre-existing narrative. Back in May, Macron was playing along perfectly with the media, dropping lines like “Make our planet great again!” and engaging in an over-reported handshake battle with Donald Trump. Macron managed his impeccable poster-boy image, and won himself quite a few fans in the Washington establishment.

RARE OPINION: Emmanuel Macron is wrong: Africa’s problem isn’t that its birthrates are too high

Back at home, however, his “centrist” policies have struggled to generate excitement. This is partially due to the fact that there is little coherence among them. Macron’s government recently managed to outrage students, after announcing cuts to housing benefits that would have amounted to a total loss of €5 per person/month. This welfare spending, which guarantees students up to €175/month in assistance for the payment of their rent, has actually driven up rental costs in student cities. In this sense, cutting down government spending was economically sound. However, Macron’s government simultaneously announced a rise in social security contributions, which would mean an up to €80/month rise in taxes for households, all to finance a highly indebted social security system.

It turns out that Emmanuel Macron’s “centrist mix” — attempting to please all parties by assembling a government with prominent members from left and right — produces little governable consistency. But a far bigger blow to Macron’s popularity has been the repeated scandals that his ministers have gotten involved in. In a recent one, two ministers were discovered taking their holidays in the house of a convicted Corsican drug dealer; both are now suing the news agency that revealed the information.

Very early in his presidency, several of Macron’s ministers had to step down over accusations of clientelism and misappropriation of public funds. The cases involved the creation of fictitious parliamentary assistant jobs and the employment of family members for large compensations. Minister of Justice François Bayrou, a close Macron ally, in charge of Macron’s large-scale “moralization of politics” plan to reduce corruption, had to step down over accusations that he misappropriated public funds.

Even worse, most of the ministers who had to leave their offices returned to parliament and now have important roles in the legislative branch. This political rochade made a mockery out of the “political consequences” that Macron wanted to introduce for those who abused their power.

RARE OPINION: The rise of the radical center

On July 14, Macron invited Donald Trump to the celebration of Bastille Day, France’s national holiday. While Trump managed to appear as a statesman, Macron’s integrity was being questioned behind the scenes by the French military. Despite his promise to spend 2 percent of France’s GDP on defense by 2025, Macron had announced budget cuts to the French army amounting to €850 million. Confronted with this, the Chief of Defence Pierre de Villiers challenged Macron about it. In front of lower military personnel, Macron told de Villiers: “I am your chief. I don’t need your pressure, nor your comments.” As result, Villiers handed in his resignation, causing a major political scandal and an uproar within France’s armed forces. On the day after the resignation, the French media was asking if Macron’s authority was in question.

This is where we are now: Macron came into this year’s election with great confidence, annihilated his political opponents in the first-round vote, and forced the remainder of the electorate to vote for him over Marine Le Pen in the second round. Long term, as the scandals multiply and his rhetoric fails to meet the reality of his daily governance, it may be that just as many French give up on Macron as did his deeply unpopular predecessor François Hollande.

Emmanuel Macron said that he ran for president to give people hope. Four months in, and all they hope is that the République gets rid off him sooner rather than later.