Trump and Obama are both headed to Europe, but Angela Merkel is only meeting with one of them 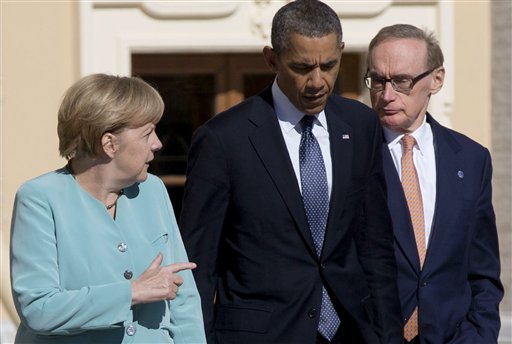 President Donald Trump is slated to take his first trip to Europe as president in May. He will be arriving in Brussels, Belgium, on May 25.

Former President Barack Obama will also be in Europe on May 25, albeit for a different reason.

President Trump will meet with NATO leaders in the Belgium capital, and Obama will be attending the launch of events celebrating the 500th anniversary of the Protestant church in Germany.

Obama is scheduled to make a speech in Berlin, Germany, and have a discussion with German Chancellor Angela Merkel on democracy called “Actively shaping democracy – taking responsibility at home and abroad.”

While the dates of both men arriving in Europe may be a coincidence, it doesn’t stop the comparisons between the current and former president’s relationship with world leaders, especially Merkel, whom Obama once called his “closest ally.”

President Trump, on the other, has been critical of Merkel’s leadership and had an awkward first meeting and press conference with the German leader when she visited the United States in March.

There is also speculation that Obama’s meeting with Merkel is an endorsement from the former president, who is popular in Germany, for Merkel, who is facing a tough re-election in September.

Obama’s decision to attend the Protestant church’s 500th anniversary celebration, though, was made after he was invited last May by the Bishop of Bavaria, Heinrich Bedfor-Strohm, according to The Guardian.

“President Barack Obama’s attending the Kirchentag in Berlin, which will ring in the Reformation Summer, underlines the international character of our 500th-anniversary celebrations,”  the bishop said in a statement.

Christina Aus der Au, president of the Protestant Church Days, which is organizing the event, also said in a statement that Obama’s attendance would show that Protestantism had “not just remained a European affair”:

[Protestantism] has shaped societies and nations all over the world […] President Obama and Chancellor Merkel have said that their dedication as politicians is also an expression of their Christian faith […] it will be really interesting to hear what the two of them say to us Christians in Europe.