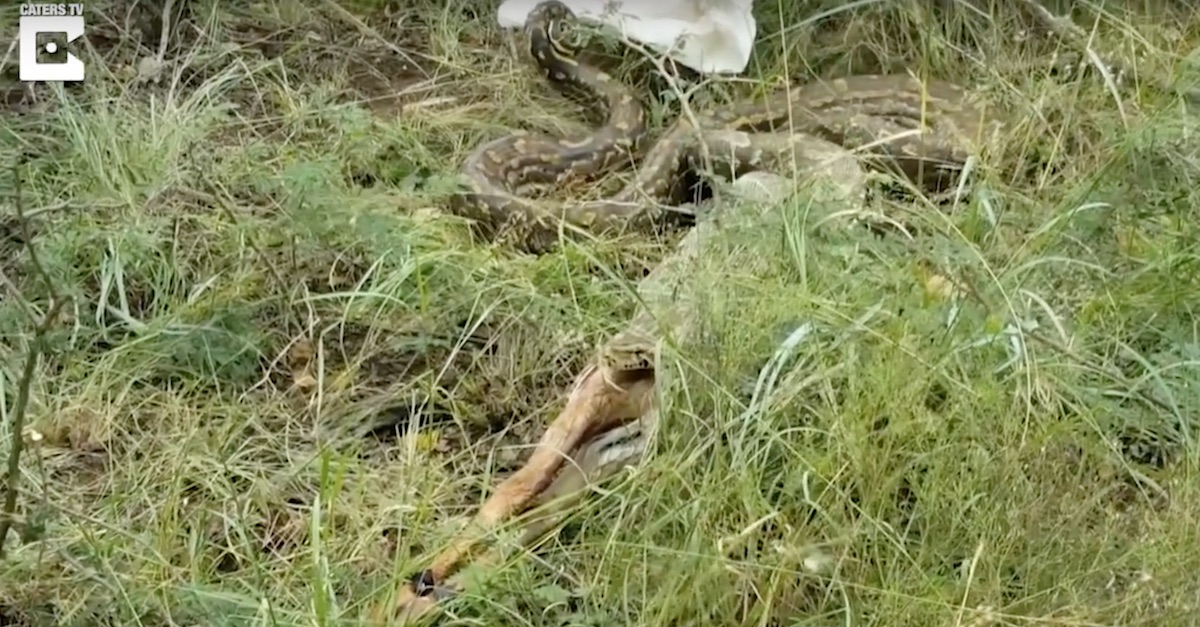 Home, home on the range, where the deer and the antelope go to die.

An African rock python that bit off more than it could swallow Groblersdal, South Africa, reacted by “barfing up” its prey on camera to the horror of antelope worldwide.

We put barfing up in quotations because, as helpfully explained by Pet-Snakes.com, there is a difference between vomiting and regurgitation. Technically speaking, the python did not vomit in this case, as the antelope never reached the stomach, which is supported by the fact that it was never broken down.

The website also says that stress, among other factors, can be a reason a snake would regurgitate a meal. It’s possible that contact with humans within a 48-hour time period after consuming the antelope caused the regurgitation.

RELATED: The nauseating footage of a python throwing up an antelope will make you cringe

The python, measuring in at 13 feet long, was rendered immobile by its gluttony. Jaco Kotze was the first person to notice the bloated snake hanging out in the grass and waiting for its digestive might to take control.

When he went back there with snake catcher Arthur Roden, the snake had begun unloading its snack.

“If you don’t know what you’re doing with the African rock python, you can get into trouble,” Roden said, according to the Daily Mail. “I’ve never heard of an African rock python actually swallowing someone, but they are constrictors, so if they wrap around your neck or around a child he can suffocate you.”

Kotze, who breeds expensive animals on a farm, asked Roden to remove the python from the area since he’s noticed creatures disappearing.

RELATED: Mama leopard spots a deadly python lurking near her cub and turns it into dinner in the blink of an eye

“I asked Jaco if he doesn’t just want to leave the snake, but he breeds expensive game on his farm, and he says they’ve noticing some of them going missing,” he said. “He thinks the snake was to blame, so he asked me to remove and relocate it. I took it to Bushfellows Game Lodge, where I’ve taken other big snakes before.”

As mentioned in a separate story about the rock python, although it isn’t venomous, it is known for squeezing the life out of and swallowing other large creatures like antelope and crocodiles.