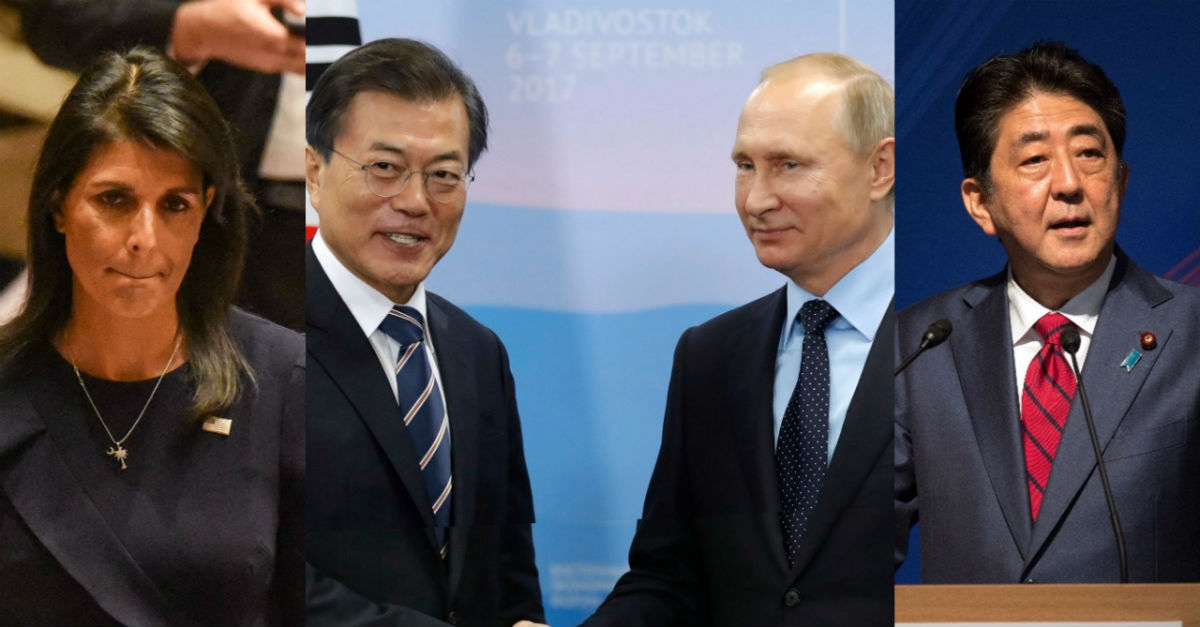 North Korea boasted a ?perfect success? in the testing of its most powerful nuclear weapon to date. The blast from the weapon is said to be more powerful than that of the bombs dropped on Hiroshima and Nagasaki in World War II. North Korea is also reportedly planning to launch a ballistic missile in the coming days.

Putin advised against sanctions and chose to encourage a dialogue with North Korean leaders.

“We should not give in to emotions and push Pyongyang into a corner,” he told reporters at a press conference following the meeting. “As never before everyone should show restraint and refrain from steps leading to escalation and tensions.”

Earlier in the week, he shared his belief that the use of tougher sanctions against North Korea was ?useless and ineffective.? He also suggested that the increased military response to North Korea would end disastrously.

Moon asked Putin to pursue sanctions against North Korea, which would include cutting off its oil supply. Though Putin pushed back against the request for the sake of the North Korean citizens, the men agreed that it was important to pursue stability in the region.

“Myself and President Putin share a view that North Korea has gone the wrong way with its nuclear and missile program and that easing tension on the Korean Peninsula is an urgent issue,” Moon told reporters. He praised the conversation he had with Putin and the efforts to seek diplomatic solutions.

Earlier in the week, President Trump announced that South Korea and Japan would be allowed to purchase an increased amount of ?sophisticated military equipment? from the United States after South Korea requested the removal of a provision that would limit the size of its warheads.

The South Korean government conducted military drills on Monday by firing missiles into the sea.

UN Ambassador Nikki Haley told an audience at the American Enterprise Institute, a nonprofit based in Washington, DC, that sanctions might not be successful.

“Do we think more sanctions are going to work on North Korea? Not necessarily,” she asked. “But what does it do? It cuts off the revenue that allows them to build ballistic missiles.”

Following North Korea?s nuclear weapon test, Haley accused the North Korean government of ?begging for war? during an emergency session of the Security Council. Secretary of Defense James Mattis also promised that a threat made against the US, one of its territories, or one of its allies ?will be met with a massive military response ? a response both effective and overwhelming.?

“We must make North Korea understand there is no bright future for the country if it pursues the current path,” he said.

Japan is also exploring the possible evacuation of 60,000 citizens living in or currently visiting South Korea. Only a week ago, Japanese citizens took cover when a North Korean missile flew over his country. It reportedly broke into three pieces before falling into the sea.

RELATED: All the ?H-bomb? and ?A-bomb? differences you need to know as North Korea ups the threat